This story was modified at 6:30 p.m. May 10 to reflect additional information about restrictions on the practice of telemedicine in Texas.

Tired of feeling “like the walking dead” but worried about the cost of a doctor’s visit, Amber Young sat on her bed near tears one recent Friday night in Woodbury, Minn. 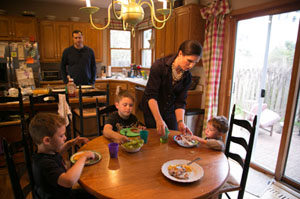 Amber Young recently logged onto an Internet site run by NowClinic Online Care, a subsidiary of health insurer UnitedHealthcare, and “met” with a doctor in Texas. After talking with the physician via instant messaging and then by telephone, Young was diagnosed with an upper respiratory illness and prescribed an antibiotic (Photo by Todd A. Buchanan for USA Today).

That’s when she logged onto an Internet site, run by NowClinic online care, a subsidiary of UnitedHealth Group (which also owns UnitedHealthcare), and “met” with a doctor in Texas.

After talking with the physician via instant messaging and then by telephone, Young was diagnosed with an upper respiratory illness and prescribed an antibiotic that her husband picked up at a local pharmacy. The doctor’s “visit” cost $45.

“I was as suspicious as anyone about getting treated over the computer,” said Young, 34, who was uninsured then. “But I could not have been happier with the service.”

NowClinic, which started in 2010 and has expanded into 22 states, is part of the explosion of Web- and telephone-based medical services that experts say are transforming the delivery of primary health care, giving consumers access to inexpensive, round-the-clock care for routine problems — often without having to leave home or work.

Insurers such as UnitedHealthcare, Aetna and Cigna, and large employers such as General Electric and Delta Air Lines are getting on board, pushing telemedicine as a way to make doctor “visits” cheaper and more easily available. Proponents also see it as an answer to a worsening doctor shortage.

But some physician and consumer groups worry about the trend.

“Getting medical advice over a computer or telephone is appropriate only when patients already know their doctors,” said Glen Stream, president of the American Academy of Family Physicians. “Even for a minor illness, I think people are going to be shortchanged,” he said.

Carmen Balber, a spokeswoman for Consumer Watchdog in Santa Monica, Calif., is concerned that lower co-payments, and other incentives, will spur consumers to see doctors or nurses online just to save money. “People will choose the more economical option, even if it is not the option they want,” she said.

“Our employees just love the convenience, the low cost and the efficiency,” said Lynn Zonakis, managing director of health strategy and resources at Delta Air Lines, which offers NowClinic to some employees for $10 a consultation. 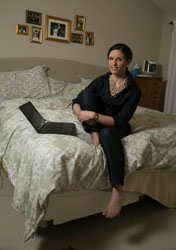 “I was as suspicious as anyone about getting treated over the computer,” said Young, 34, who was uninsured as she waited for coverage to kick in at a new job. “But I could not have been happier with the service” (Photo by Todd A. Buchanan for USA Today).

The global telemedicine business is projected to almost triple to $27.3 billion in 2016, according to a recent report by BBC Research, a Wellesley, Mass., research firm.

“Virtual care is a form of communication whose time has come and can be instrumental in fixing our current state of affairs within the health care system,” said Robert L. Smith, a family doctor in Canandaigua, N.Y., and co-founder of NowDox, a telemedicine consulting firm.

Although the field developed more than 40 years ago as a way to deliver care to geographically isolated patients, its growth was slow. That’s changed in the past decade thanks to the development of high-speed communications networks and the push to lower health costs.

“It’s the wave of the future,” said Joe Kvedar, director of the Center for Connected Health, founded by Harvard Medical School.

One major obstacle has remained, however: Many state medical boards make it difficult for doctors to practice telemedicine, especially interstate care, by requiring a prior doctor-patient relationship, sometimes involving a prior medical exam, said Gary Capistrant, senior director of public policy at the American Telemedicine Association, a trade group. “The situation seems to be getting worse, not better,” he said.

He cited a 2010 ruling by the Texas Medical Board that effectively blocks a physician from treating new patients from the patients’ homes via telemedicine. The only exception is if the patient has been referred by another physician who evaluated him or her in person.  A first-time patient may get a virtual consultation in limited circumstances — if they go to a setting such as a clinic, EMS station or pharmacy that is equipped with diagnostic tools and staffed by a nurse or pharmacist who can help the physician make a physical evaluation.

“It’s about accountability,” said Dr. Humayun Chaudhry, CEO of the Federation of State Medical Boards. State boards insist on licensing doctors treating patients in their states so that if patients are injured, they have a state agency they can go to for help.

“We want to enable telemedicine to flourish, but at the end of the day we want patients protected,” Chaudhry said.

Some medical boards are loosening restrictions, he noted, citing nine, mostly rural, states, including Tennessee, Nevada and New Mexico, which in recent years passed rules to ease the licensing process.

Companies marketing telemedicine services say they are seeing strong demand. Bloomington, Minn.-based HealthPartners, a health system with four hospitals and 1.4 million health plan members, began an online service in fall 2010 that allows anyone in Minnesota or Wisconsin to consult a nurse practitioner for $40 or less.

Using an online interactive tool called Virtuwell, 23,000 patients have received a treatment plan often including a prescription, after answering questions about their condition and medical history.

Laurie Fedje, of Coon Rapids, Minn., tried Virtuwell last fall when her son, Noah, had a high fever and other flu symptoms and she did not want to go out in bad weather. She said it took her about 15 minutes to answer about 50 questions about her son’s health, such as whether he had ear pain, how long he had been sick and whether he had any allergies. Within a few minutes, she received an e-mail and a call from a nurse practitioner who diagnosed him with flu and sent a prescription.

“It was wonderful,” Fedje said.

About 80% of patients using Virtuwell have insurance, and many use the service as a covered benefit, said Kevin Palattao, a vice president at HealthPartners.

He notes that Virtuwell has turned away 45,000 prospective patients because they had problems that required in-person consultations, such as chest pain or multiple chronic conditions.

UnitedHealth Group subsidiary OptumHealth, which operates the NowClinic, said it leaves it to physicians to determine if they can diagnose a patient via computer.

“This is not intended to replace the intimacy of the doctor-patient relationship,” said Chris Stidman, senior vice president.

The company would not disclose how many people have used the service or how many physicians it employs.

Camp Hill, Pa.-based Rite Aid recently began testing NowClinic in several of its drugstores in Michigan and Pennsylvania. It’s a cheaper alternative to hiring doctors or nurse practitioners to work in store clinics.

At the stores, patients can pay $45 for a 10-minute teleconsultation with a doctor, or less if their employer has negotiated a reduced rate.

In a tiny office next to the pharmacy counter in one Harrisburg, Pa., Rite Aid, patients use a Web camera and microphone to talk to a doctor on a desktop computer, where they type in their symptoms, a brief medical history and their credit card information. A thermometer, blood pressure machine and scale are available nearby.

The physician sends an electronic prescription to the store that can be picked up minutes later.

On a recent afternoon when a reporter tested the service, there was a choice of only one doctor — Dr. Pardeep Shori, an internist in Irving, Texas, who is board-certified in family medicine.

Shori said he typically treats about a dozen NowClinic patients a day. While he is unable to look into a patient’s ears or throat, he noted, “The key thing you learn in medical school is that a lot of information comes from just listening.”

Young, the woman who talked to a NowClinic physician from her home in Woodbury, Minn., said she would use the service again even though she now has health insurance. She was impressed when the online doctor called her three days later to see how she was feeling.

“I’ve never had my own primary care doctor do that,” she said.