School administrators in Dothan, Ala., aren’t sure whether health act rules taking effect next year will require them to offer medical coverage to substitute teachers, who lack it now.

But they aren’t waiting to find out. The system has decided to hire subs through Kelly Services, a temporary staffing agency, to avoid any health-cost obligations that might come as their direct employer.

The district pays about $700 per month per full-time teacher for medical insurance. “You multiply that times 300 [substitutes] and you’ve got a big expense,” said Dell Goodwin, personnel director for Dothan City Schools.

The rush to implement the Affordable Care Act, which is generating billions for insurers, hospitals and technology vendors, also looks like a boon for staffing companies, whose share prices have soared. But some suggest that exceptions for temporary employees could leave holes in the health law’s expanded coverage. 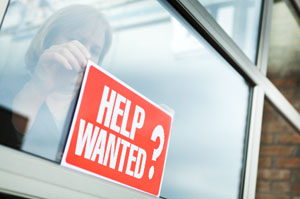 “That could lead to an increase in part-time workers” who lack insurance, said Susan Houseman, an economist at the Upjohn Institute for Employment Research who studies staffing companies. “You regulate something and people will always try to find a way around the regulation.”

Starting in January, employers with at least 50 workers must offer affordable coverage or pay a penalty. Some are considering outsourcing jobs to specialists such as Kelly, Manpower, Robert Half and Randstad to stay under this limit.

“We are already getting inquiries from our client base for companies in and around 50, asking us to help them understand this legislation, and to inquire as to how we might be helpful,” Keith Waddell, Robert Half’s president, told investors on a conference call a few weeks ago. “Our response is that we can legally help them remain under 50.”

The health law is also prompting larger organizations such as Dothan schools to use temp agencies. By requiring employer coverage only for those who put in at least 30 hours a week, the act creates an incentive to do less with permanent workers and more with part-timers, which are staffing agencies’ specialty.

Manpower is talking to clients about “a more flexible labor model” where workers “might be working 29 hours a week,” company CEO Jeffrey Joerres told investors in January. “We definitely look at it as positive.”

Manpower and Robert Half declined to make officials available for interviews.

Little-known, complex rules developed by the Internal Revenue Service could allow even some full-time jobs placed through temp agencies to come without health benefits.

Manpower, Robert Half and other staffing specialists are giant companies, with far more than 50 employees. So they are subject to the same health act requirements as everybody else to offer coverage to full-timers.

But in regulations issued last year the IRS left an opening for employers of “variable-hour” labor such as temp agencies. If it’s not clear upon hiring that an employee will consistently work more than 30 hours weekly, companies get up to 12 months to determine whether she is full time and qualifies for health benefits — even if she does end up working full time. Few temps last 12 months.

“The overwhelming majority of temporary help workers, even if they were working full-time on a weekly basis for a number of months, wouldn’t be covered because of that 12-month look-back period,” said the Upjohn Institute’s Houseman. The rules, she added, “were written in a very favorable way for the temporary help industry.”

There are good arguments for exempting new, variable-hour workers from health-coverage obligations, she said: tracking who worked 30 hours during which weeks for health-plan eligibility would cause confusion for employers and insurers alike.

The upshot, however, is that most temporary help workers — nearly 3 million on any given day — won’t have employer-sponsored medical coverage even if they’re working more than 30 hours, she said.

Under the health law’s mandate that everybody be insured, temp workers without insurance must pay a penalty or seek coverage in state-based marketplaces known as exchanges. Because of the lower wages typically paid by staffing agencies, temps will likely be eligible for tax credits or Medicaid.

Kelly CEO Carl Camden downplays the idea that employers will shed health coverage liabilities by hiring staffing companies. He sees clients’ adjustment to the health act as “a modest opportunity” for his company.

“There is a portion of the staffing industry who think there will be a large amount of companies trying to avoid obligations under the ACA and trying to shift over to staffing firms,” Camden said in an interview. “I don’t see that as happening.”

The bigger business may be helping companies navigate the law with consulting or by taking over temporary jobs they already have, say Camden and other industry officials.

Staffing company share prices have shot up, partly in response to the recovering economy and partly because of hopes for a surge in Affordable Care Act business, industry analysts say. Manpower has risen by half since November while Kelly, Randstad and Robert Half are all up more than 35 percent, far more than the market as a whole.

A few years ago, when Massachusetts implemented its own requirement that companies provide health coverage to full-time workers, temp jobs increased six times faster than in the country as a whole, said Jeffrey Silber, who follows staffing company stocks for BMO Capital Markets.

Sometimes subs work more than 30 hours and sometimes they don’t, she said, and keeping track of who would be owed health coverage “would just be a continuing accounting nightmare.”

Several other Alabama systems are hiring subs through Kelly, which has been offering health-law webinars through the state school superintendents association.

And no wonder, Goodwin said. At last year’s meeting of the American Association of School Personnel Administrators, “that was one of the hottest topics,” she said: “How this Affordable Care Act would affect school systems.”