While legislation expanding how and where Texans can carry weapons has dominated the Legislature recently, one state lawmaker is targeting the doctor’s office as a place to keep the federal government from learning who owns guns.

Over the objections of the medical community, state Rep. Stuart Spitzer, R-Kaufman, has filed a bill that would prohibit doctors from asking patients whether they own a firearm and makes the Texas Medical Board, which licenses physicians, responsible for doling out punishment.

“Pediatricians are asking children away from their parents, ‘Do you have guns in your house?’ and then reporting this on the electronic health records, and then the federal government, frankly, has access to who has guns and who doesn’t,” Spitzer said in a recent interview. He said he experienced the phenomenon firsthand when he took his daughter to the doctor, who asked her whether there were any guns in the house.

Spitzer, a surgeon, said he wanted to make sure that doctors “have the right not to ask that.”

But doctors’ groups say House Bill 2823 would squelch important discussions that are part of the physician-patient relationship.

“We, as physicians, ask all sorts of questions — about bike helmets and seat belts and swimming pool hazards, dangerous chemicals in the home, sexual behaviors, domestic violence. I could go on and on,” said Gary Floyd, a Fort Worth pediatrician and board member of the Texas Medical Association.

“All of that’s geared mainly to how we should direct our advice,” he said. “As a pediatric [emergency room] doc, one of the worst things you have to do is sit down with the family and explain that the child has died, or may never be the same, because of an unintended gunshot wound.” 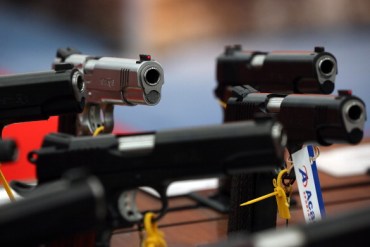 Handguns are displayed in the Remington booth during the 2013 NRA Annual Meeting and Exhibits at the George R. Brown Convention Center on May 5, 2013 in Houston, Texas. (Photo by Justin Sullivan/Getty Images)

Spitzer said his bill would still allow psychiatrists, who are more likely to encounter suicidal patients, to ask about gun ownership. But for most physicians, he said, asking about gun ownership is “not appropriate.” He suggested they could instead ask more “open-ended” questions about a person’s means to harm himself.

Florida passed a similar law in 2011. Challengers, including the American Academy of Family Physicians, challenged the law in court arguing that it infringed on doctors’ free-speech rights. The 11th U.S. Circuit Court of Appeals in Atlanta last year upheld the law as constitutional.

“The Act simply informs physicians that inquiring about a private matter irrelevant to medical care isn’t part of the practice of good medicine and that, as always, a physician may face discipline for not practicing good medicine,” Judge Gerald Tjoflat wrote in the majority opinion.

Texas Bill Would Prohibit Doctors From Asking About Guns