As the health law’s second open enrollment season barrels to a close on Sunday, nearly a million Texans have purchased or applied for health insurance. This time around, insurance brokers are aggressively marketing themselves to shoppers – it’s a big change for the brokers who have had an uneasy relationship with the health law for years.

Bart Franco is one customer who sought help from a broker this time. He is the pastor of a tiny community church that he founded in a garage behind his house near downtown Houston where he spends hours every day in prayer.

Franco, 65, is retired and covered by Medicare, so he needed to buy insurance for his wife and son. When he tried to enroll them in an Affordable Care Act plan last year, he got nowhere. 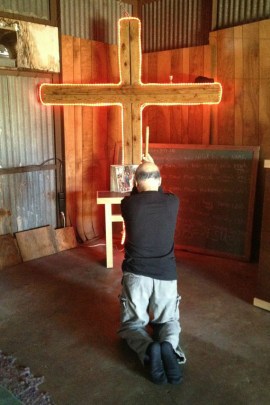 Bart Franco, 65, prays in the church he created in his backyard garage. After difficulties shopping on his own last year, Franco used a licensed broker to buy health insurance for his family in 2015. (Carrie Feibel/Houston Public Media)

Franco missed the 2014 deadline to get a plan on the federal marketplace exchange. He later called Blue Cross Blue Shield directly and succeeded in purchasing a short-term catastrophic plan for his family. But he felt the process was rushed, and he was uncomfortable with the plan’s high deductible.

“They just give you insurance and [say that] it costs this much, and you only pay $146 (a month) that sounds good, doesn’t it? OK, fine. You’re hooked, and you don’t even know what you have.”

So this year, when enrollment began again for 2015 plans, he turned to Jo Middleton, a licensed insurance broker who had advertised in the local paper.

Franco’s rough experience last year was common, says Middleton, who is also president of the Houston Association of Health Underwriters. People struggled to pick plans on their own, using the healthcare.gov website. Many learned later they couldn’t afford the deductible. Others discovered that a favorite doctor or hospital wasn’t accepting a particular plan.

“Buying an insurance policy is not like going online and buying a vacation,” Middleton said. “It’s much more complicated. There are a lot more nuances.”

Some shoppers did turn to government-funded navigators for help, but there are fewer than 500 of them in Texas, compared to more than 190,000 health insurance agents.

From the beginning, brokers felt left out of the law because the federal marketing focuses on the navigators and the website.

Last year, Houston brokers worked on their own to help consumers. But now they’re uniting to assert their expertise and market themselves. Middleton has organized two enrollment events featuring brokers from the Houston Association of Health Underwriters.

Brokers across Texas are trying multiple strategies: holding events with hospitals and community groups, putting up fliers and even buying TV ads.

Middleton said brokers have to become more visible, because the Affordable Care Act was written in a way that sidelined brokers and what they could offer.

“There has been a deep-rooted thought process that agents and brokers are superfluous. That we are not necessary, that we are an added expense,” she said.

Brokers say the health law’s impact on them is mixed.

Theoretically, the law created a whole new market of potential customers and agents get paid a commission every time they sign one of those people up for a new health policy.

But they also say their commissions have been cut.  That’s because of the law itself – it dictates how much money insurance companies can set aside for profit and overhead, and some companies have dealt with that by cutting the agents’ commissions.

Marcy Buckner of the National Association of Health Underwriters in Washington, D.C. says, “This has just kind of devastated the agent community, and has been in place for several years.”

The association is backing efforts in Congress that would help insurance agents and brokers by changing the rules on commissions.

In the meantime, Buckner says brokers have had to adjust.

“We’ve seen some agents who have been able to really work the new opportunities that they’ve had in the marketplace, and have continued to grow their business, and have succeeded very well, while the others have still been struggling under this cut in commissions, ” she says.

And some brokers have to switch their focus to Medicare policies or health plans for small businesses.

It’s too early for any exact numbers on how many brokers stayed in the game, or how many people they signed up.  What is clear is that more than nine million people have signed up or re-enrolled this year, with a few days left still before the deadline.  And about one in ten of those people is from Texas.