Texas officials have declined to establish a state-based health insurance marketplace, a major provision of the federal Affordable Care Act. So private organizations are working to educate Texans about coverage options through the federal health insurance exchange, which opens on Oct. 1.

Of the more than 6.3 million uninsured Texans — the state has the country’s highest rate of uninsured residents — almost half will be eligible to buy insurance through the federal exchange, an online tool for coverage shopping. 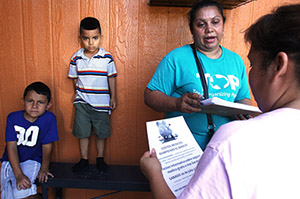 But Texans suffer from a “general lack of knowledge” about the law, said Allison Brim, a director at the Texas Organizing Project, one of several groups working to reach uninsured families before the federal exchange’s rollout.

“Folks just don’t have a lot of information about the exchanges and what their options will be,” she said.

The Texas Department of Insurance has made no extra effort to publicize the federal exchange, said John Greeley, an agency spokesman. In 2010, it conducted a federally financed campaign about health insurance options but has done nothing comparable since, he said, adding that those with questions could use the department’s website or telephone service.

Brim criticized the state for not promoting the exchange, saying its help would make it possible to reach all eligible Texans by October.

“The state has, as far as we know, done nothing to spread the word to uninsured Texans about the exchanges or the Affordable Care Act,” she said. “It leaves a mountain of work for us.”

In response to questions about publicizing the exchange, Lucy Nashed, a spokeswoman for Gov. Rick Perry, wrote in an email that the state was “not interested in implementing Obamacare, including the exchange.”

On July 10, a division of the U.S. Department of Health and Human Services awarded about $9.9 million to Texas community health centers to make people aware of their options.

The department will also finance at least two “navigators” — organizations intended to guide people through the exchange — per state. Texas’ navigators will receive about $8 million.

But Jacob Cortes, the lead organizer of the group Austin Interfaith, said that might not be enough. “The private sector would have to step up,” he said.

Julie Bataille, a spokeswoman for the Centers for Medicare and Medicaid Services, said navigators were just one federal resource. The agency also dispatches officials from its Dallas office and Washington headquarters to speak with health workers and organizers in Texas.

And it collaborates with local initiatives, Bataille said, including groups like Blue Cross Blue Shield, which started a Be Covered campaign; the Texas Organizing Project; and Enroll America, which promotes the health care act.

Be Covered has joined with churches, museums and other organizations in every Texas county to distribute literature on obtaining insurance, said Michelle Riddell, a Blue Cross Blue Shield of Texas spokeswoman.

The Texas Organizing Project and Enroll America are canvassing and organizing community meetings where Texans can get more information.

Reaching exchange-eligible people will not be easy, said Mimi Garcia, Enroll America’s Texas director. She added that groups like hers will have to work beyond January 2014, the deadline for Americans to obtain coverage.

“I would love it if we could get everybody enrolled in the first year and that would be it and we would be done,” she said. “But that’s not going to be the case.”

Cortes said ambiguity about the federal exchange — including yet-undetermined providers and premiums — make it difficult to spread a clear message.

Texas’ size poses another challenge, Brim said, because in rural areas “we just can’t reach as many people as fast.”

“There will be some folks,” she added, “who just don’t get the word.”