When she was 16, Cheri Huber considered her skin splotchy and pasty. She began to go to a tanning salon about three times a week.

“That was the new craze,” said Huber, now 40 and living in Kingwood, a suburb near Houston. “There were tanning businesses everywhere. I said, ‘This must be cool to do because everybody’s doing it.’” 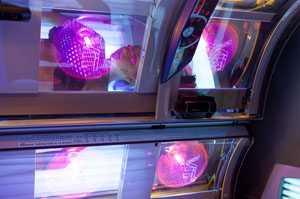 Huber continued her tanning regimen for more than a decade, eventually buying her own personal tanning bed. In 2008, she was diagnosed with melanoma, the most dangerous form of skin cancer.

“I wish I was a little more educated,” Huber said about her tanning routine.

The relationship between tanning beds and skin cancer has concerned lawmakers on a state and national level for years, but there has been no consensus on how to address it. The federal government requires tanning bed manufacturers to disclose the risks on warning labels, and some states require youth to have parental consent to tan.

This year, Texas joined a number of states that ban minors from tanning indoors. Senate Bill 329, by state Sens. Joan Huffman, R-Houston, and Sylvia Garcia, D-Houston, took effect Sept. 1. It overturns the previous law, which allowed certain minors — those between 16½ and 18 — to tan with parental consent.

“You have to take steps to make sure you provide for the public safety,” Garcia said. “Drinking, smoking, there are a number of other areas where you want to make sure people know the potential health risks and I think that is a good reason for us to step in.”

Garcia’s statement echoes a number of experts in the medical community, including the Texas Dermatological Society and the Texas Medical Association, which supported the ban. The measure has drawn the ire of business owners and industry leaders who say the government has no place telling people whether or not to tan.

Jeffrey Gershenwald, the medical director of the Melanoma and Skin Center at the University of Texas MD Anderson Cancer Center in Houston, said there is clear evidence that using a tanning bed increases the risk of melanoma.

Melanoma develops when skin cells are damaged by ultraviolet radiation and turn into malignant tumors. It is treatable in early stages but can be deadly if it spreads to other parts of the body.

In 2009, the World Health Organization classified tanning beds as carcinogenic, meaning they have a direct link to cancer. That same year, 61,646 people in the U.S. were diagnosed with melanomas of the skin, according to the Centers for Disease Control and Prevention, and 9,199 died from the condition.

“The challenge is when melanoma develops, it can be completely without any symptoms,” he said. “It’s not something that one would necessarily feel pain from or other kinds of symptoms other than a change in a mole, or a new mole.”

Joseph Levy, a scientific advisor to the American Suntanning Association, said the new law would force businesses to close and lead some to tan without supervision, which could increase sunburns and, subsequently, cases of skin cancer.

“If you’re going to tell people sunshine is bad for them, you may as well tell them air is harmful,” he said.

Levy said the scientific evidence linking melanoma to tanning beds was misleading because researchers often included tanning beds used in homes and doctors’ offices in addition to those at salons.

Zach Medlin, who owns Aruba Tan in Austin, said most of his clients are college students. He said that the ban would not immediately affect his business, but that it would have an impact on him in the long run because there will be fewer tanners.

“They’re going to know it’s been illegal since they were under 18 and think, ‘It’s really bad for me,’” Medlin said.

Texas Minors Can No Longer Use Tanning Salons