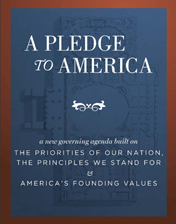 In late September, led by Minority Leader John Boehner, some House Republicans released “A Pledge to America” — an outline of their plan should they gain control of Congress. (Note: KHN summarized news coverage of the Sept. 23 event: GOP ‘Pledge’ To Create Jobs, Control Spending, Repeal Health Law Draws Mixed Reaction ) Here is the section of the text that talks about health care.

A PLAN TO REPEAL AND REPLACE

THE GOVERNMENT TAKEOVER OF HEALTH CARE

The American people wanted one thing out of health care reform: lower costs, which President Obama and Democrats in Washington promised, but did not deliver. Instead of expanding the size and scope of government with more debt, higher taxes, and burdensome mandates, Americans are calling for reforms that lower costs for families and small businesses, increase access to affordable, high-quality care and strengthen the doctor-patient relationship. We have a plan to do just that.

WHAT WE’RE UP AGAINST
The core promises Washington Democrats made to force the health care law through Congress have already been broken:

Jobs.
Employers large and small coast-to-coast have announced that they are considering laying off employees or dropping their health care coverage in response to the new law, despite President Obama’s boast that it is also a jobs plan.

Costs.
Both the nonpartisan Congressional Budget Office (CBO) and the chief actuary at the Obama Administration’s Centers for Medicare & Medicaid Services (CMS) have confirmed that the new law fails to lower health care costs as promised.

Deficits and Debt.
The Obama Administration’s Social Security and Medicare Trustees’ report confirms that the new law does little to address the nation’s growing fiscal crisis despite President Obama’s pledge that passing his plan constituted the “most important thing we can do” for the nation’s financial future.

Taxes.
The new health care law includes at least a dozen violations of President Obama’s pledge not to raise taxes on middle-class families. The Obama administration has conceded that the ‘individual mandate’ at the heart of the new law is indeed a tax, a notion the president “absolutely” rejected last fall.

Seniors.
The chief actuary at the Obama Administration’s Centers for Medicare & Medicaid Services has confirmed that the new law’s massive Medicare cuts will fall squarely on the backs of seniors, millions of whom will be forced off their current Medicare coverage.

If You Like ItYou Can’t Keep It.
The Obama Administration has been forced to acknowledge that the new law will force some 87 million Americans to drop their current coverage despite President Obama’s promise that Americans would be able to keep the coverage that they have.

Abortion.
Americans are overwhelmingly opposed to using tax dollars to pay for abortion, and the executive order issued by President Obama in conjunction with congressional passage of the health care law is inadequate to ensure taxpayer funds are not used in this manner.

Instead of bringing the full weight of the government to bear in enforcing this job-killing health care law, Washington Democrats should listen to the American people and stand down.

Repeal the Costly Health Care Takeover of 2010
Because the new health care law kills jobs, raises taxes, and increases the cost of health care, we will immediately take action to repeal this law.

Purchase Health Insurance across State Lines
Americans residing in a state with expensive health insurance plans are locked into those plans and do not currently have an opportunity to choose a lower cost option that best meets their needs. We will allow individuals to buy health care coverage outside of the state in which they live.

Expand Health Savings Accounts
Health Savings Accounts (HSAs) are popular savings accounts that provide cost-effective health insurance to those who might otherwise go uninsured. We will improve HSAs by making it easier for patients with high-deductible health plans to use them to obtain access to quality care. We will repeal the new health care law, which prevents the use of these savings accounts to purchase over-the-counter medicine.

Strengthen the Doctor-Patient Relationship
We will repeal President Obama’s government takeover of health care and replace it with common-sense reforms focused on strengthening the doctor-patient relationship.

Ensure Access for Patients with Pre-Existing Conditions
Health care should be accessible for all, regardless of pre-existing conditions or past illnesses. We will expand state high-risk pools, reinsurance programs and reduce the cost of coverage. We will make it illegal for an insurance company to deny coverage to someone with prior coverage on the basis of a pre-existing condition, eliminate annual and lifetime spending caps, and prevent insurers from dropping your coverage just because you get sick. We will incentivize states to develop innovative programs that lower premiums and reduce the number of uninsured Americans.

Permanently Prohibit Taxpayer Funding of Abortion
We will establish a government-wide prohibition on taxpayer funding of abortion and subsidies for insurance coverage that includes abortion. This prohibition would go further and enact into law what is known as the Hyde Amendment as well as ban other instances of federal subsidies for abortion services. We will also enact into law conscience protections for health care providers, including doctors, nurses, and hospitals.

Through July 31, 2010, 3,833 pages of federal regulations have been issued regarding the new law.

Roughly 16,500 IRS auditors, agents, and other employees may be needed to collect the hundreds of billions of dollars in new taxes levied on the American people by the new health care law.

The new health care law includes $569.2 billion in tax increases  including taxes that will directly increase the cost of health care goods and services  and $528.5 billion in Medicare cuts, which will be used to create new programs not related to seniors.