On Monday, the first open enrollment period for the new Affordable Care Act will close, and the opportunity to sign up for health insurance will not reopen again until November. For our family, President Barack Obama’s promise to make health insurance “affordable and available to every single American” has not come true.

In 2008, during the recession, my husband, Mike, accepted a buyout during the downsizing of his company and began a new career as a Texas public high school English teacher. Despite more than 30 years of experience in the publishing industry and five years now teaching, he earns just $37,000 a year. Combined with my small freelance income, that puts our family of three at 200 percent of the federal poverty level, an income level that qualifies other uninsured families for hefty premium and cost-sharing subsidies for policies sold on the health law’s online marketplace. 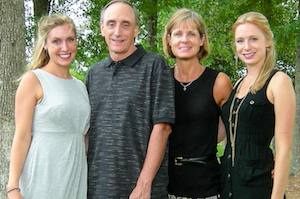 Laura Platt, Michael Platt, Kathie Platt, and Emily Platt, who lives independently and is not on the family’s health policy. (Photo Courtesy of Kathie Platt).

Good insurance coverage is important to us, especially because our daughter has a rare autoimmune disease. So we have opted for the PPO insurance plan offered through Mike’s school district, instead of the lower-cost HMO option. We pay more than $1,000 a month for the coverage, and that doesn’t include dental and vision insurance, which easily adds another $1,000 a year.

To try to save money, I got off his policy and purchased an individual plan that saves us about $100 a month.

When the ACA offered premium subsidies for the low-to-middle-wage worker, we began to have some hope of relief. We could not have been more wrong. Here’s why: Under Obamacare, people who get insurance through their employer are not qualified for subsidies if their work-place coverage is considered affordable—it cannot cost more than 9.5 percent their income—and it meets the minimum value standard—it must provide at least 60 percent of allowed medical expenses.

We’re paying nearly a third of our income for insurance, but the affordability standard is based on cost of coverage offered to the individual worker, no matter how much he pays in addition to that for spousal or family coverage. Mike’s insurance is considered very affordable, because the HMO offered to him alone costs just $420 a year, about 1 percent of his salary and well below 9.5 percent.

So I continue to look for full-time employment with benefits and keep my independent insurance.

Congress apparently built this exclusion into the health care law to prevent a mass exodus of workers from their employer-sponsored health plans. And the administration decided to interpret the law as referring to the cost of an individual’s coverage, despite lobbying from consumer groups and some Democratic lawmakers. However, offering some low-to-middle wage earners health insurance subsidies through tax credits, and not make it available to others like us, smacks of legalized disparity.

I wrote to the president and one of my senators, John Cornyn, a Republican, about the disparity.  The president responded with a form letter extolling the virtues of his new health care marketplace, and  Sen. Cornyn wrote back  condemning the atrocities inherent in the health law. I’m just guessing that neither of them ever read my letter or honestly considered my questions. Certainly, neither was prepared or willing to answer them.

While Sen. Cornyn boasted profusely for five paragraphs about his all-out-effort to repeal Obamacare (without ever addressing unsustainable health premium costs born by Texans before and after Obamacare), the president offered an equally profuse boast in the opposite direction. “The bottom line is that nobody is losing their right to healthcare coverage,” Obama wrote.

Right or left, red or blue, both sides of the power divide are conspicuously silent about the inequitable distribution of subsidies.

The operative question is: What exactly is a health care marketplace subsidy? It is essentially up-front tax relief and tax credit based on income, but only offered preferentially to those without employee health insurance that the government considers “affordable.” It does not matter that these subsidy-receiving workers are making just as much as, or more than, those who are ineligible for a subsidy by virtue of a bogus affordability formula.

I am reminded of the popular fairy tale, “The Emperor’s New Clothes.” The ACA has promised every American who doesn’t have health insurance a beautiful new suit of clothes. Some Americans may actually receive this new attire. The rest of America will help pay for it. While marketplace enthusiasts celebrate the ACA as a great success, low-to-middle income workers who already receive employee health insurance will see the ACA as it really is: window dressing, or successful enchantment, but a failed attempt to address some real disparities.

Kathie Platt is a freelance writer living in Beaumont, Texas.

For A Family With Job-Based Insurance, Premium Subsidies Fall Far Short Of Promises