What was once considered a groundbreaking U.S. study to track the health of children from birth to adulthood may be stopped before its official start, alarming advocates and researchers who say its findings are crucial to developing prevention strategies for childhood illnesses like asthma, autism and attention deficit disorder.

Researchers for the National Children’s Study, devised by Congress in 2000, say the study could eventually influence a range of parental choices – from what foods kids eat to the household products or medications they are exposed to. Study advocates also say the potential findings will likely go beyond advice given to parents, and could have an impact on insurance-coverage decisions and even broader public policy questions.

“We don’t have the evidence we need to truly improve children’s health in this country. We need this study. … The importance of the investment is clear,” said Lisa Simpson, who is president and CEO of AcademyHealth, a membership group of policy analysts and health services researchers, and was involved in the study’s early years.

The 21-year longitudinal study of 100,000 children was set to start this year. Its implementation, though, has snagged on concerns that it’s based on costly and antiquated research methods, and that it has been plagued by mismanagement. A National Institutes of Health working group is investigating these issues and offering recommendations –due out in December — about the initiative’s future. 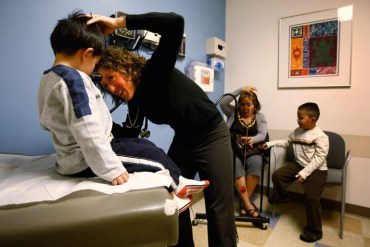 Almost 10 years before the study’s launch, and amid growing concerns that children suffered disproportionately from the effects of social and environmental factors, President Bill Clinton created a task force to look at policy solutions, which eventually called for legislation to mandate a large study. In May 2000, former Rep. Michael Bilirakis, R-Fla., introduced the Children’s Health Act, which was passed and then signed by Clinton that October.

The Vanguard Study, which began in 2007 as the official precursor to the NCS, is a small version of the main study. It has been operating through 40 sites to test ways to recruit women who expect to be pregnant in the near future, and to experiment with data systems. Since then, however, this blueprint has been marked by problems, which led to a July Institute of Medicine report questioning whether the main study should be given a green light to go forward without major changes.

Even researchers involved in the pilot project have criticized it for not identifying a streamlined sampling strategy. The study’s design also fails to take advantage of a number of communications tools, including social media, email, text messages and phone calls.

Jane Holl, a principal investigator who also is a professor of pediatrics and preventive medicine at Northwestern University, expressed frustration that researchers aren’t allowed to use these commonsense ways to keep in touch with participants. Despite this disenchantment, though, the potential findings keep her interested in the project’s potential.

“It could tell us so much about relationships — starting in the prenatal period through late childhood — and how those factors affect early adulthood,” said Holl, who is charged with overseeing ten of the 40 pilot sites.

Federal support for the research is also at risk. Funding was put on hold for the main study in 2013 after congressional appropriators provided $165 million per year for the main study — $30 million less than initially planned, and made that money hinge on the Institutes of Medicine evaluating progress. This reality has added to advocates interest in the NIH working group’s recommendations, and the potential ways that more could be done with less.

Often research is focused on adult illnesses instead of studying children until adulthood and figuring out how to prevent health problems later in life, said James Perrin, president of the American Academy of Pediatrics.

“If I’m a member of Congress, I’m more concerned about heart disease at 50 years old, and that’s where we’ve funded it more actively. We need to know what we can do in childhood,” Perrin said, adding that “we’re impatient at this point” and it’s important to “deal with the logistical problems.”

The Future Is Uncertain For The National Children’s Study