He thought it was pneumonia. Michael Trost, 52 and seemingly healthy, just wasn’t feeling right. During a chance break at work as a wood finisher, Trost’s wife brought him to an emergency room near where they live at the edge of the Poconos in Dingmans Ferry, Pa.

“They’ll give me a chest x-ray and antibiotics and I’ll be on my way,” Trost thought.

Trost left in April with much more than that: six weeks at home, recovering from open-heart surgery. Doctors had learned that Trost’s heart was “pumping really hard, and it’s not working,” he recalls, so they transferred him to a bigger hospital for a mitral valve repair. He was discharged a few days later. 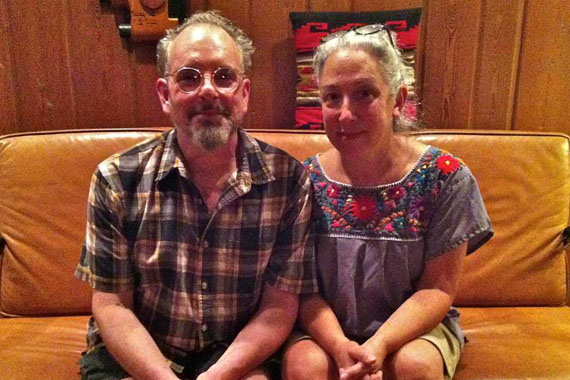 Michael Trost of Dingmans Ferry, Pa. (seen here with his wife, Susan Rosalsky) was billed $32,325 for a surgery with an out-of-network doctor at an in-network hospital. (Elana Gordon/WHYY)

But a few weeks after the unanticipated surgery, the bills started rolling in, including one for $32,325.

Turns out, even though the two had made a point of going to hospitals that were covered by their insurance, the doctor who performed the heart surgery was out-of-network. Their insurer then sent them a check directly for what it deemed a reasonable rate for the procedure, $4,016, meaning the two were on the hook for the rest.

”I guess in my naive view of health insurance, I had felt that because we were in network, that everything would be taken care of,” says Susan Rosalsky, Trost’s wife.

The situation Trost and Rosalsky experienced is known as balance billing, and it often comes as a surprise to consumers with insurance left holding large medical bills. It could happen to just about anyone with insurance because when doctors are out-of-network and don’t take a patient’s insurance, patients may then owe the balance between what the provider charges and what the insurance plan is willing to pay.

What Some States Are Doing

While patients may be on the hook for these bills, about a quarter of states have enacted protections, mostly for emergency room situations. A Kaiser Family Foundation analysis in 2013 noted that 13 states have some kind of restrictions on balance billing patients in certain situations.

“If you ask the insurance and physician community, they would say they’d love to keep patients from being caught in middle,” says Jack Hoadley, a research professor at Georgetown University’s Health Policy Institute who’s examined policies in seven states. “But until they can agree on how payments are worked out between the insurer and physician, it’s hard to get legislation passed.”

In Colorado, insurers must pay non-network providers what the providers charge patients at in-network hospitals or what they’re willing to negotiate. Under HMO plans in Florida, on the other hand, Hoadley says providers cannot bill for more than what an insurer agrees on. And insurers in Maryland must pay for covered services at rates the state sets.

Transparency in pricing is also an issue: California has rules mandating that certain insurers maintain accurate in-network provider lists. Texas has a mediation process for certain types of surprise bills and the governor there recently signed a law providing more price and network transparency at free-standing emergency facilities.

But New York, the state where Trost had his surgery and where he has insurance through Rosalsky’s health insurance plan, recently enacted the strongest, “most comprehensive” set of rules to date, according to Hoadley.

The state enacted legislation this spring that provides more transparency around what services cost and safeguards patients when they do get a surprise bill. Under the rules, if patients don’t know in advance that a doctor is out of network or if they have no choice, they won’t be responsible for the bill. Instead, it’s up to the insurer and provider to reach a payment deal through an independent resolution process.

“The broad principle is people who do everything right to stay in network, but get slammed with bills, they are going to be held harmless,” says Matthew Anderson, a spokesman for New York’s financial services office. “It’s already helping consumers. It’s a really great relief to those who otherwise would have been fighting for years with their insurance company over these bills that run into the tens of thousands of dollars.”

Doctors, however, were worried it could result in much lower payments.

Dr. Andrew Kleinman, an immediate past president of New York’s medical society, says key to getting doctor buy-in on the law was having an outside agency determine fair rates and mediate disagreements. Insurers, not patients, would then directly reimburse them for the settled amount.

Lawmakers in neighboring New Jersey have been debating legislation. California lawmakers have also been looking at expanding their protections beyond emergency room scenarios.

But dealing with the $32,325 bill from his surgery was a whole other heartache: making phone calls, writing letters, and filing appeals. At first it seemed like they’d be responsible for it.

But New York’s law protecting against balance billing went into effect March 31, 2015, a day before Trost had his surgery.

Much of the law doesn’t take effect until 2016, when insurance contracts are renewed, but after more calls, appeals and back-and-forths, the two say the state and their insurer told them they would not be responsible for the bill.

As for Trost, he says he can breathe easier now. “It was a huge relief,” he says.

Meanwhile, many have their eye on New York’s new law to see how well it works.

“It’s very new. We don’t know whether it’s going to work yet but it’s very promising,” says Dr. Kelly Kyanko, a researcher at New York University who’s analyzing the out-of-network phenomenon and how some consumers are handling it. “Everyone is waiting to see what happens because if works, hopefully it could be applied to other states as well.”

This story is part of a reporting partnership with NPR, WHYY’s The Pulse and Kaiser Health News.

The Hospital Is In Network, But Not The Doctor: N.Y. Tries New Balance Billing Law