This story also ran on The Boston Globe. This story can be republished for free (details).

Bea Lipsky shuffled into her wellness coach’s office one morning this fall and parked her walker by the wall. Lipsky, 89, had had a trying year, enduring a hernia operation and two emergency room visits for heart problems. She’s losing her hearing, and recently gave up her dream of riding in a hot air balloon for her 90th birthday.

That day, though, she was filled with pride: She told her coach she’d achieved her goals for the year, including attending her grandson’s wedding in China.

Lipsky spent two months training, doing leg curls and riding a stationary bicycle, to build up the strength to make it through a 10-day trip to China, accompanied by an aide. “It was absolutely divine,” she told coach Susan Flashner-Fineman, who works at the Orchard Cove retirement community in Canton, Mass., where Lipsky has lived for the past four years.

Lipsky’s check-ins with Flashner-Fineman are part of a well­ness coaching program, Vitalize 360, that Orchard Cove start­ed eight years ago in collaboration with the Kendal nonprofit senior living organization in Pennsylvania.

When seniors arrive at Orchard Cove, a coach measures their health and wellness in an hourlong, one-on-one session, assessing common problems for seniors, like loneliness, pain and distress. The coach also asks about se­niors’ families, friendships, and spiritual life. Then the se­niors meet with their coach every year before their physical checkup with a doctor, to talk about what matters most to them. The coaches, who come from a variety of backgrounds, including fitness, social work and chaplaincy, help seniors set goals for the year — which could be physical, social, in­tellectual or spiritual. These goals become the focus for the senior’s medical team, and the seniors follow up with their coaches every three months to stay on track.

Wellness coaching aims to rethink how we treat aging, said Aline Russotto, Orchard Cove’s executive director. “We used to be at our very best when somebody was in crisis,” she said.

But Orchard Cove staff think they can help residents live healthier and happier lives by shifting the focus away from “fixing what’s broken,” said Russotto, to “living your best day every single day until the end.”

Dr. Atul Gawande, author of “Being Mortal” and an expert on end-of-life care, calls the Vitalize 360 approach “transfor­mative.” It recognizes that “even as you may have health is­sues and frailty and the difficulties that can come with aging … people have lives worth living. And in fact have a lot more life worth living,” he said. 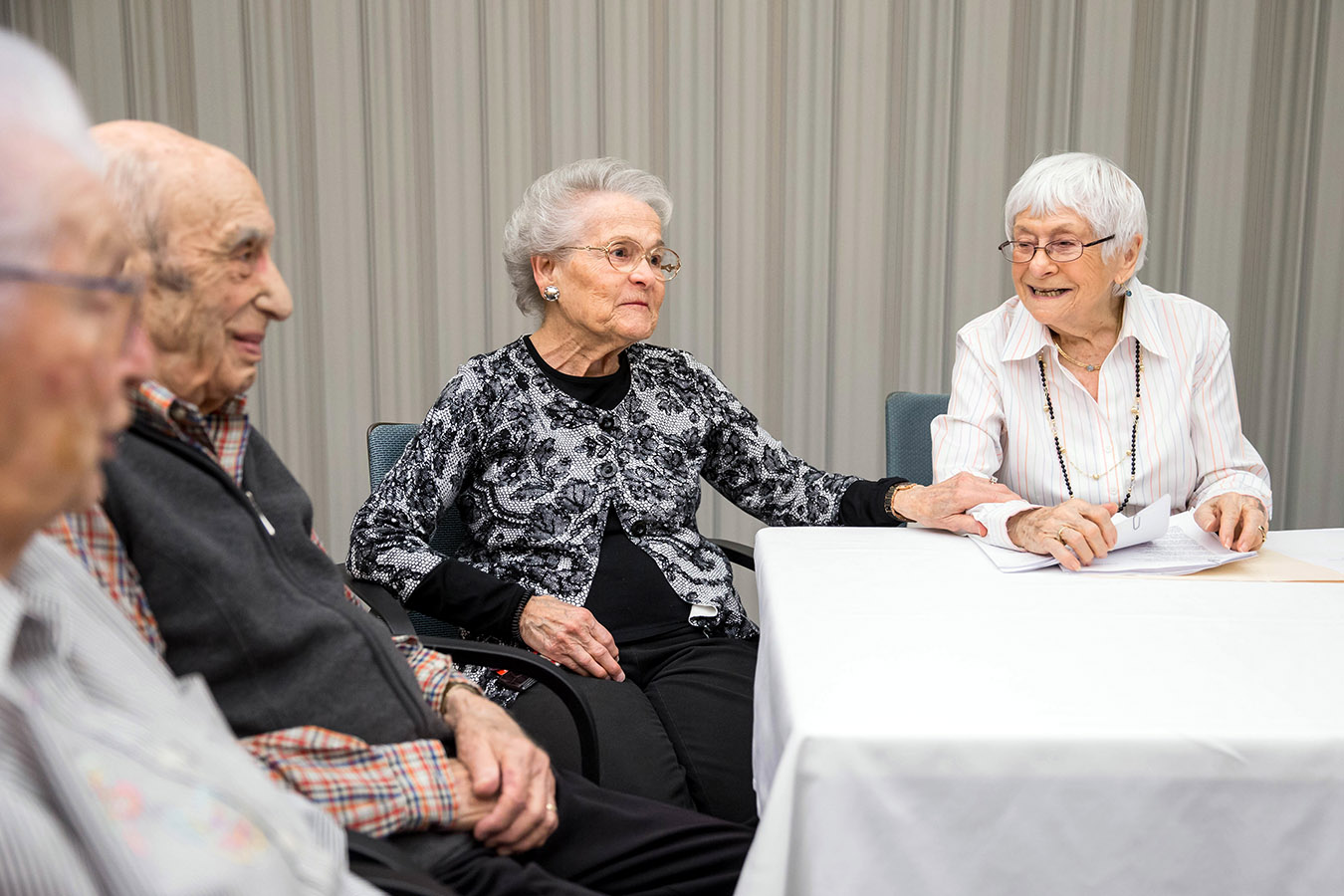 When young people become dis­abled, others often help them find ways to contribute to the world, he noted, but that is much less true for older people.

“I see it as the kind of thing that you’d like to see go population­wide,” Gawande said. “You’d like to make it routine.”

Since the program started at Orchard Cove, fitness par­ticipation — the proportion of residents who exercise at least three times a week — has more than doubled, from 30 to 77 percent, and one study found participants felt significant­ly less depressed than a control group, with a notable jump in the number who said they felt “delighted with life.”

The program itself has spread to 35 communities in 12 states, reaching more than 2,600 older adults in independent or as­sisted living. Since existing staff can be retrained to serve as coaches, the program isn’t costly, though there is an annual fee for training and data-tracking software.

Flashner-Fineman, who spent a decade as Orchard Cove’s fitness director, trav­els to new sites several times a year to run a three-day train­ing to teach new coaches the skills they’ll need to work with patients and run standardized assessments. She and her col­leagues also train health professionals, leadership and other staff on how to orient their care around seniors’ goals.

In a recent visit, an energetic Don­noe announced “great progress” on her fitness goals. She now gets up at 5 a.m. on Tuesdays to drive off-campus for nearly two hours of aqua “boot camp” and weight training. Flash­ner-Fineman asked if Donnoe, who moved there recently, is making time to meet her neighbors, too.

Programs like this have emerged because seniors are living longer and defying predictions of cognitive and functional decline, said John Morris, a researcher at the Institute for Ag­ing Research at Hebrew SeniorLife, which operates Orchard Cove. Morris designed the assessment tool that Vitalize 360 uses and is helping retirement communities track partici­pants’ wellness.

Esther Adler, a 93-year-old poet, writer and former He­brew school teacher, moved to Orchard Cove in 2012, a few years after her husband died. She set a goal to “be a pro­ductive person” but didn’t know exactly how.

After learn­ing about her background in an extensive intake interview, staff invited her to start teaching Hebrew to patients on the skilled nursing floor. Adler discovered their memories were too short for language lessons, and started teaching Bible les­sons and prayers instead — a practice she has continued for three years.

Adler, who also finds purpose in writing poetry and help­ing neighbors through hospice, has proved resilient amid physical setbacks: She broke her pelvis last year when she tripped in the lobby of a hotel room in Poland, the night be­fore the premiere of a documentary about her life.

“They thought I would never walk,” Adler said. “Here I am, I’m walking.”

Lipsky, despite her successful trip to China, confessed she feels “hesitant” about the year ahead. “I’m not as active as I’d like to be,” she said. As she spoke, her right hand started shaking — a new symptom she hadn’t yet told her doctor about.

But Lipsky lit up talking about achieving another goal, finding a new way to cope with loss. She sat with her granddaughter two weeks before and di­aled up a medium on Skype to try to communicate with her husband, Sidney, who died three years earlier.

“She breathed in our en­ergy — on the computer!” Lipsky said. “It was eerie. We felt like he was there.”

She said it helped the family grieve and brought her happiness. Since the experience, she said, “our lives haven’t been the same.”

In the year ahead, she plans to attend another wedding, this time in Canada, and continue “finding unexpected things that bring me joy.”

These Annual Checkups Help Seniors Not Only Survive But Thrive