A long-established belief about health costs is that some areas of the country, like McAllen, Texas, are expensive, while others like San Francisco are cheap. But an analysis released Wednesday provides evidence that prices can be exorbitant for some medical services and bargains for others—all in the same place.

The study from the Health Care Cost Institute, a Washington-based nonprofit, found discrepancies within some of the 41 areas of the country it studied using its rare data trove–billing claims from three of the biggest commercial insurers. Together the records show insurance payments for a quarter of the people under 65 who got their coverage through their employers between 2011 and 2013. 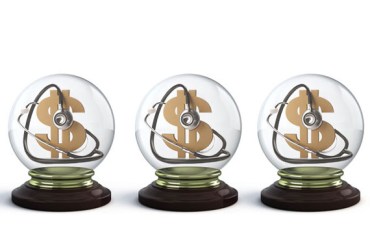 The study divided bills into inpatient care — services provided to overnight patients in hospitals and nursing facilities — and outpatient care done in labs, clinics, ambulatory surgery centers and at hospitals for patients who weren’t admitted. The study did not include any professional fees billed independently by doctors.

The researchers found that some areas had both high inpatient and outpatient prices in comparison to the other regions. Those included Bridgeport, Conn.; Boulder, Denver and Fort Collins in Colorado; Dallas and El Paso in Texas; Milwaukee; and Philadelphia. Other places had prices that were low in both inpatient and outpatient settings, including Louisville, Ky.; New Orleans, Peoria, Ill., St. Louis, and Tucson, Ariz.

But elsewhere, it was not so easy to categorize a region as high or low cost with just one composite measure. Inpatient prices were below average while outpatient prices were above average in Corpus Christi, Texas; Green Bay, Wis.; Lakeland and Miami in Florida; and Trenton, N.J.

The reverse was true in Orlando and Jacksonville in Florida.

“To say this area’s really good versus that area’s really bad is a little bit unfair because it ignores the underlying factors,” said Eric Barrette, the institute’s director of research. He said the discrepancies were possible because inpatient and outpatient care can be separate markets that are not competing with each other.

The findings were notable because the study is one of the few using private commercial insurance data. Until recently, most evaluations of spending levels in places were based on Medicare trends, even though Medicare sets consistent prices so the only differences are in the levels of use. This approach led to McAllen’s identification as a high cost area in a much cited New Yorker article, which was influential as the health law was being drafted. (McAllen was not one of the areas in the new study.)

For each of the areas, the institute published a Health Marketplace Index showing prices and the use of medical services for both outpatient and inpatient care. The study found that the level of use and the prices did not correlate, but did not delve into what factors—such as the intensity of hospital competition—might be driving price differences.

The study was funded by the Robert Wood Johnson Foundation, a New Jersey-based philanthropy.

Think Health Prices Are High Near You? Maybe Yes — And No