CANCUN, Mexico — Donna Ferguson awoke in the resort city of Cancun before sunrise on a sweltering Saturday in July.

She wasn’t headed to the beach. Instead, she walked down a short hallway from her Sheraton hotel and into Galenia Hospital.

A little later that morning, a surgeon, Dr. Thomas Parisi, who had flown in from Wisconsin the day before, stood by Ferguson’s hospital bed and used a black marker to note which knee needed repair. “I’m ready,” Ferguson, 56, told him just before being taken to the operating room for her total knee replacement. For this surgery, she would not only receive free care but would receive a check when she got home.

The hospital costs of the American medical system are so high that it made financial sense for both a highly trained orthopedist from Milwaukee and a patient from Mississippi to leave the country and meet at an upscale private Mexican hospital for the surgery.

Ferguson gets her health coverage through her husband’s employer, Ashley Furniture Industries. The cost to Ashley was less than half of what a knee replacement in the United States would have been. That’s why its employees and dependents who use this option have no out-of-pocket copayments or deductibles for the procedure; in fact, they receive a $5,000 payment from the company, and all their travel costs are covered.

Parisi, who spent less than 24 hours in Cancun, was paid $2,700, or three times what he would get from Medicare, the largest single payer of hospital costs in the United States. Private health plans and hospitals often negotiate payment schedules using the Medicare reimbursement rate as a floor. 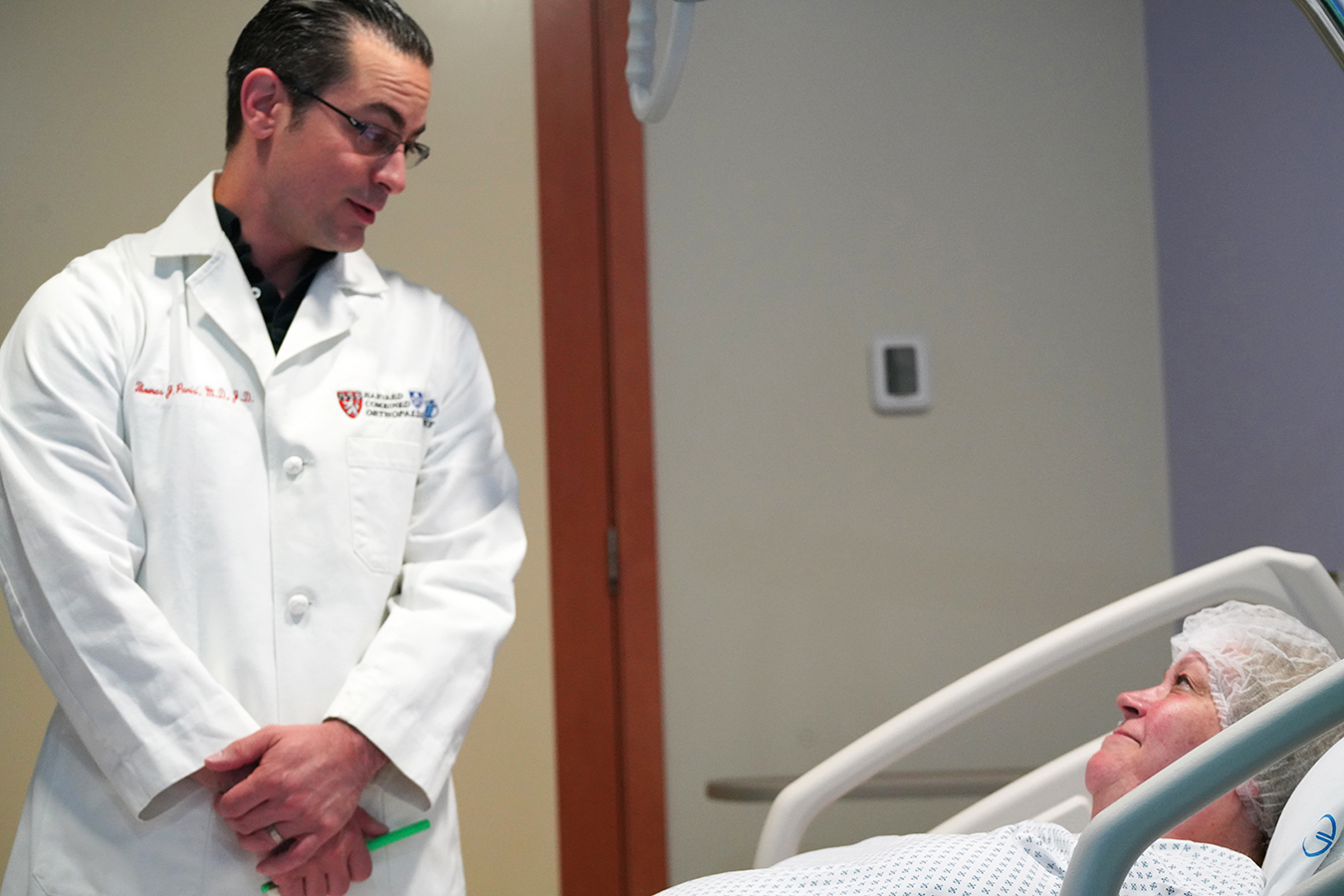 Ferguson is one of hundreds of thousands of Americans who seek lower-cost care outside the United States each year, with many going to Caribbean and Central American countries. A key consideration for them is whether the facility offers quality care.

In a new twist on medical tourism, North American Specialty Hospital, known as NASH and based in Denver, has organized treatment for a couple of dozen American patients at Galenia Hospital since 2017.

Parisi, a graduate of the Mayo Clinic, is one of about 40 orthopedic surgeons in the United States who have signed up with NASH to travel to Cancun on their days off to treat American patients. NASH is betting that having an American surgeon will alleviate concerns some people have about going outside the country, and persuade self-insured American employers to offer this option to their workers to save money and still provide high-quality care.

NASH, a for-profit company that charges a fixed amount for each case, is paid by the employer or an intermediary that arranged the treatment.

“It was a big selling point, having an American doctor,” Ferguson said.

The American surgeons work closely with a Mexican counterpart and local nurses. NASH buys additional malpractice coverage for the American physicians, who could be sued in the United States by patients unhappy with their results.

“In the past, medical tourism has been mostly a blind leap to a country far away, to unknown hospitals and unknown doctors with unknown supplies, to a place without U.S. medical malpractice insurance,” said James Polsfut, the chief executive of NASH. “We are making the experience completely different and removing as much uncertainty as we can.”

Medical tourism has been around for decades but has become more common in the past 20 years as more countries and hospitals around the world market themselves to foreigners.

There are, of course, risks to going outside the country, including the headache of travel and the possibility that the standards of care may be lower than at home. If something goes wrong, patients will be far from family and friends who can help — and it might be more difficult to sue providers in other countries.

The high prices charged at American hospitals make it relatively easy to offer surgical bargains in Mexico: In the United States, knee replacement surgery costs an average of about $30,000 — sometimes double or triple that — but at Galenia, it is only $12,000, said Dr. Gabriela Flores Teón, medical director of the facility.

The standard charge for a night in the hospital is $300 at Galenia, Flores said, compared with $2,000 on average at hospitals in the United States. 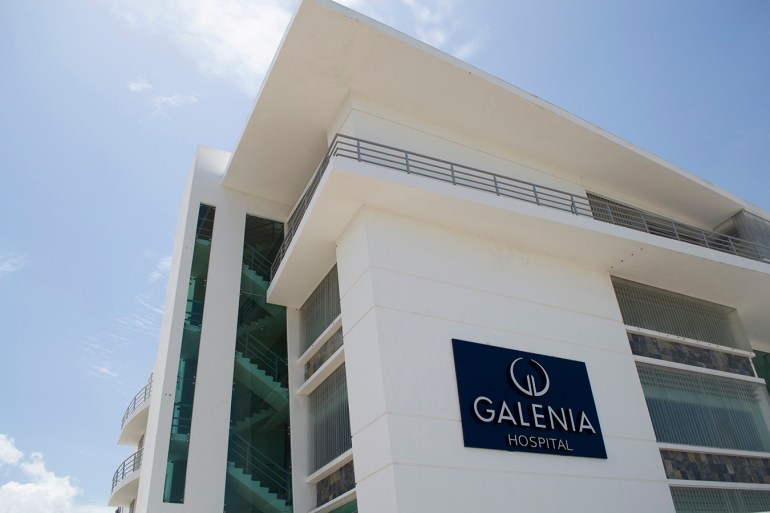 A knee replacement surgery costs an average of about $30,000 at U.S. hospitals, but only $11,000 at Galenia Hospital in Cancun, Mexico.(Rocco Saint-Mleux for KHN) 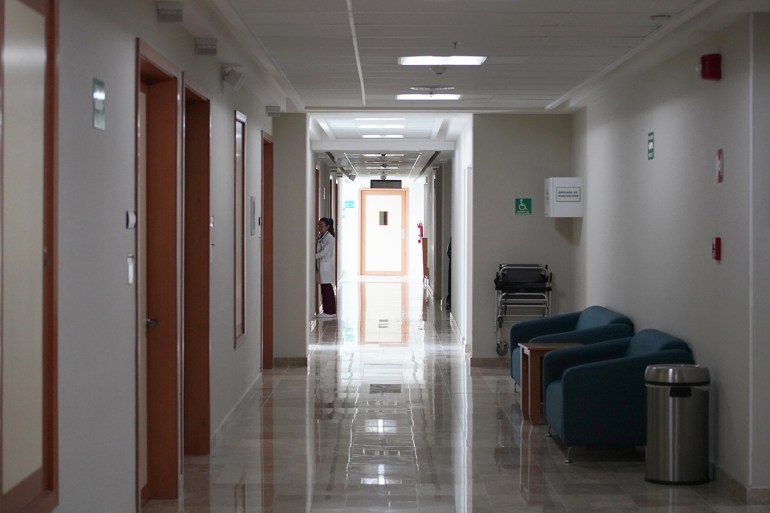 A hallway inside Galenia Hospital in Cancun, Mexico.(Rocco Saint-Mleux for KHN)

The other big savings is the cost of the medical device — made by a subsidiary of the New Jersey-based Johnson & Johnson — used in Ferguson’s knee replacement surgery. The very same implant she would have received at home costs $3,500 at Galenia, compared with nearly $8,000 in the United States, Flores said.

Galenia is accredited by the international affiliation of the Joint Commission, which sets hospital standards in the U.S. But to help doctors and patients feel comfortable with surgery here, NASH and Galenia worked to go beyond those standards.

I. Glenn Cohen, a law professor at Harvard and an expert on medical tourism, called the model used by NASH and a few other similar operations a “clever strategy” to attack some of the perceived risks about medical tourism.

“It doesn’t answer all concerns, but I will say it’s a big step forward,” he said. “It’s a very good marketing strategy.”

Still, he added, patients should be concerned with whether the hospital is equipped for all contingencies, the skills of other surgical team members and how their care is handed off when they return home.

Officials at Ashley Furniture, where Ferguson’s husband, Terry, is a longtime employee, said they had been impressed so far. The company offers the option of overseas surgery through NASH at no cost — and with an incentive.

“We’ve had an overwhelming positive reaction from employees who have gone,” said Marcus Gagnon, manager of global benefits and health at Ashley, a Wisconsin-based company with 17,000 employees. Ferguson was the company’s 10th insured person to go to Cancun. 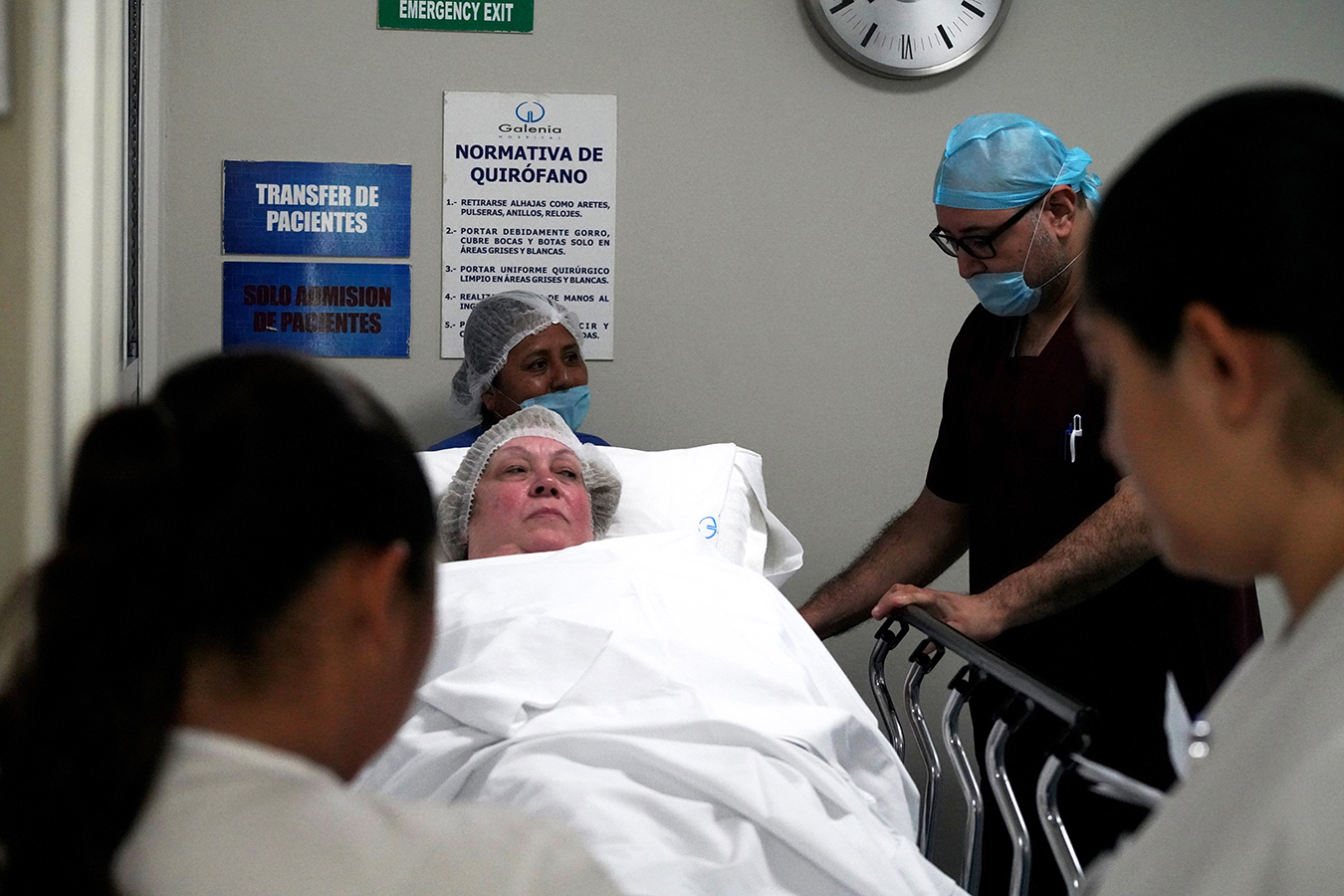 Donna Ferguson is wheeled into surgery at Galenia Hospital in Cancun, Mexico.(Rocco Saint-Mleux for KHN)

Ashley also has sent about 140 employees or dependents for treatments at a hospital in Costa Rica, and together the foreign medical facilities have saved the firm $3.2 million in health costs since 2016, he said.

“Ever after the incentive payments and travel expenses, we still save about half the cost of paying for care in the United States,” Gagnon said. “It’s been a nice option — not a magic bullet — but a nice option.”

NASH’s strategy has its skeptics.

“Building a familiar culture in a foreign destination may be appealing to some American consumers, but I do not see it as a sustainable business,” said Irving Stackpole, a health consultant in Rhode Island. “It’s not unusual for people thinking about this to have doctors, family and friends who will see this as a high-risk undertaking.”

Stackpole said only a limited number of Americans were willing — even with a financial incentive — to travel abroad because most perceive the care won’t be as good.

‘You Are Nuts For Doing This’

Ferguson’s knee started causing her trouble two years ago, and last fall a doctor recommended replacing it. She is on her feet most of the day assembling furniture toolkits at her job at American Furniture Manufacturing in Ecru, Miss. Terry Ferguson mentioned the Cancun option he had heard about at work. The couple pay $300 a month in premiums for family health coverage.

“I had a friend say, ‘You are nuts for doing this,’ but Dr. Parisi trained at Mayo, and you can’t do any better than that,” Ferguson said before the surgery. Also, having an American doctor meant that if something went wrong, she could file a malpractice suit in the United States, she added. 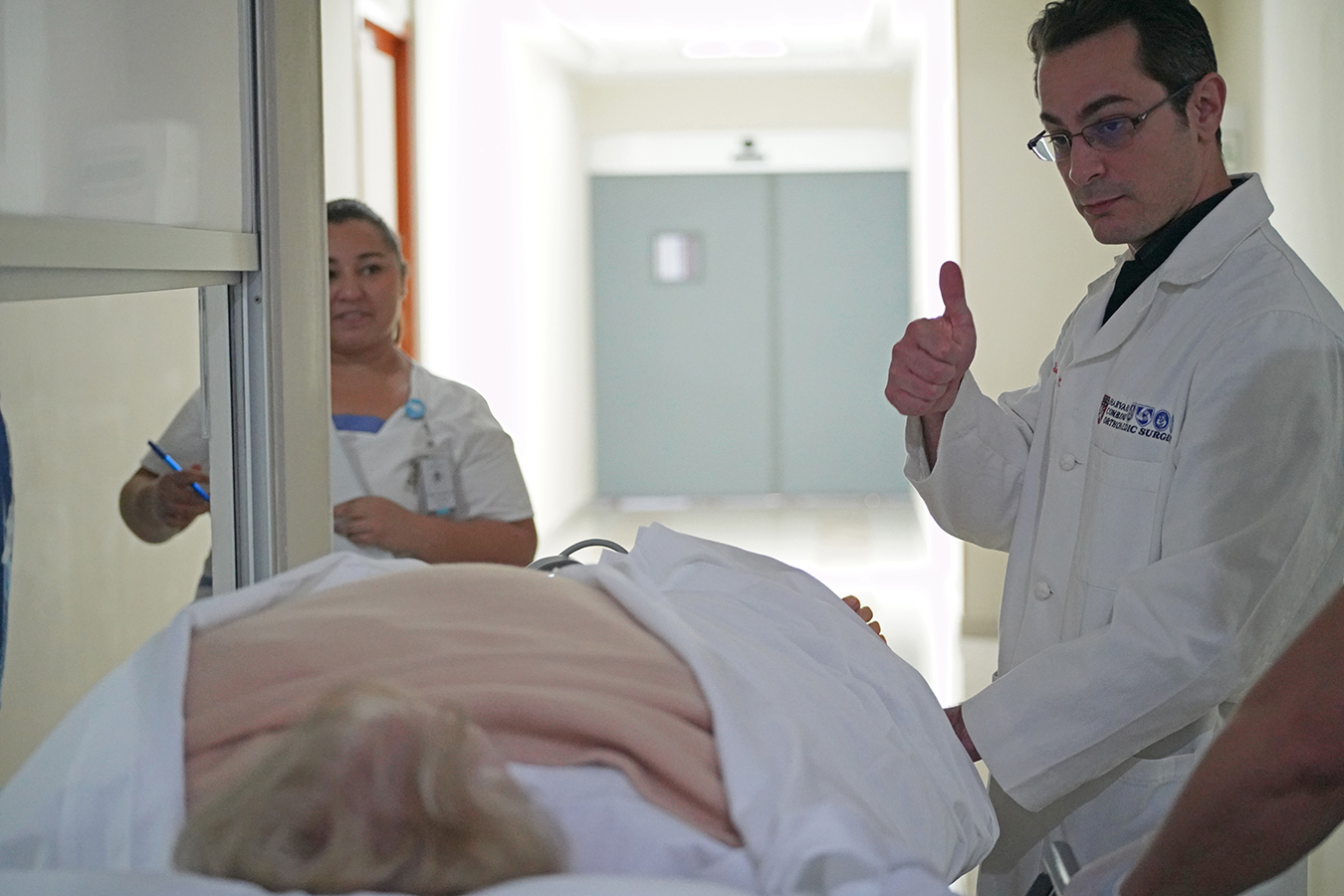 IndusHealth, Ashley’s medical travel plan administrator, arranged for her to get a physical exam, knee X-rays and heart tests near her home to make sure she was a good candidate for surgery. It even had her see a dentist to make sure she didn’t have an infection that could complicate her recovery. Parisi reviewed some of those records before Ferguson headed to Cancun.

The company also coordinated her medical care and made travel arrangements, including obtaining passports, airline tickets, hotel and meals for the couple.

In Mexico, the day before surgery, Ferguson had more X-rays and had her blood drawn. After lunch, the couple met with Noemi Osorio, a nurse, who reviewed Ferguson’s schedule and showed her the physical therapy facilities. Later, they met Parisi and the rest of the medical team.

“My job is pretty easy,” Parisi told her. “How you do over the next five or 10 years depends on how well you work with the physical therapy.”

The surgery began at 8:20 the next morning. Dr. Daniel Rios, an orthopedic surgeon who practices full time in Cancun, worked with Parisi. Rios, who had done a fellowship at Brigham and Women’s Hospital in Boston, checked on Ferguson for several days after the operation.

By 9:30 a.m., the operation was over, and at 11 a.m. she left the recovery area. Parisi checked on her there. “Everything went great,” he told her before heading to the airport for his 2:30 flight home.

Parisi said that the lack of English proficiency among some surgical staff members created “momentary delays” but that the bilingual surgical assistant helped.

A little more than three hours after the surgery, Ferguson was in her hospital room, and a physical therapist came and helped her out of bed. Using a walker, she gingerly took some steps to test out her new knee. By the next morning, she was on crutches walking the hallway and was discharged before noon. She stayed at her hotel 10 additional days while having physical therapy twice a day at the hospital.

“It’s been a great experience,” she said two days after the surgery. “Even if I had to pay, I would come back here because it’s just a different level of care — they treat you like family.” 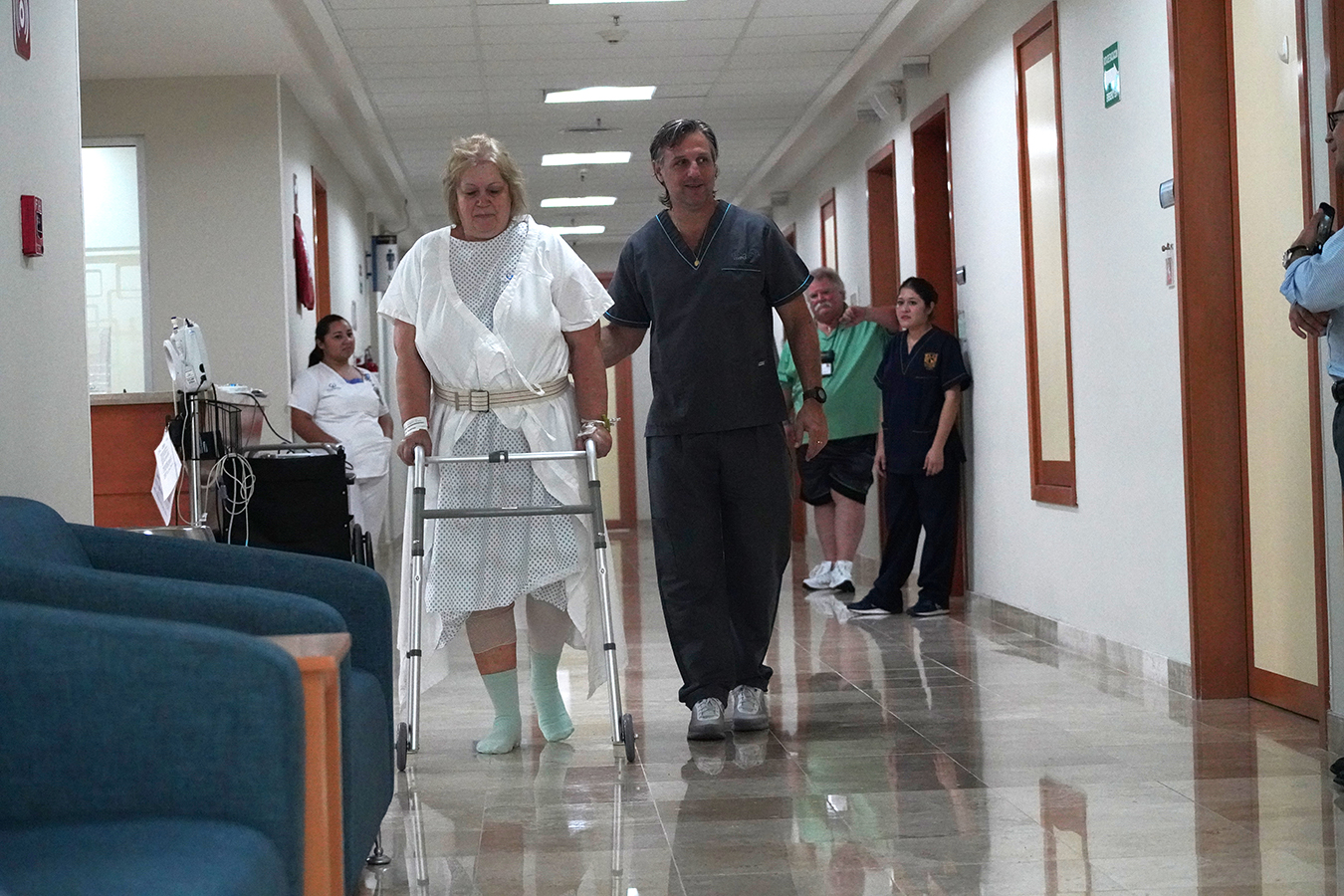 To Save Money, American Patients And Surgeons Meet In Cancun