JACKSON, Miss. – In Mississippi, one of 36 states letting the federal government operate the online health insurance marketplace created by the health law, consumers continue to face long delays and other technical difficulties as they try to log on and shop for affordable coverage. Sixteen other states and the District of Columbia are operating their own marketplaces.

“Why keep trying?” asked Meredith Stark, 29, a hotel desk clerk in the northeast Mississippi town of Blue Springs. “Because this is something we need. We have a right to life, liberty and pursuit of happiness. And, I am sorry, but not having health insurance denies life.”

Stark says she has a chronic blood condition and had been skipping medication for three years while uninsured because of its cost.

The marketplace, also known as an exchange, will offer plans based on four categories — gold, silver, bronze and platinum — with varying deductible costs, copayments and other consumer cost sharing. But the combination of heavy traffic – federal officials reports hits in the millions — and programming problems has made the web site difficult to access since its Oct. 1 launch.

After a week of trying, though, Stark managed to complete the online process and enroll her husband and herself in a plan that will cost $60 a month.

But other Mississippi residents report a very different story.

Robbie Gowdy, a 25-year-old uninsured bartender in Jackson, says he wants to enroll but when he attempted to use the site he found repeated errors, redundant requests for information, and long waits. He tried to use the website, but after an hour, he called it quits. 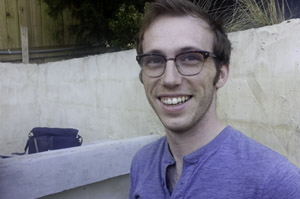 Jackson bartender Robbie Gowdy wants to sign up for health insurance, but has not yet enrolled (Photo by Jeffrey Hess/MPB).

“Usually when you have to jump through this many hoops you are at least going to have cable at the end,” Gowdy said. But he also plans to keep on trying.

“We got a little bit of the way, it wasn’t complete and total failure,” he explained. “I did get an account created in the marketplace. So that door is open for coming back later when the site is up and running more fluidly to see what kind of health coverage I am able to get.”

Officials need healthy young people like Gowdy to be persistent – if only people with serious health problems end up buying coverage, premium costs are likely to skyrocket in the marketplace in subsequent years.

The website is expected to be a main way the roughly 275,000 uninsured people in Mississippi get coverage. People who don’t have access to a computer or email account, though, will likely have to rely on the help of “navigators,” who can offer face to face help to enroll in the exchange. Currently there are around 50 navigators in Mississippi.

This story is part of a collaboration that includes Mississippi Public Broadcasting, NPR and Kaiser Health News.

Mississippi Consumers Try And Try Again To Use Healthcare.gov