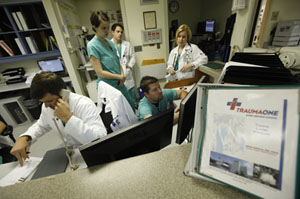 But that’s not how its competitor 18 miles away saw the move by Orange Park Medical and its parent, HCA Holdings, the nation’s largest for-profit hospital chain.

“We believe HCA is responding not to a market need, but instead is exploiting the system to increase their revenues,” said Jim Burkhart, CEO of nonprofit Shands Jacksonville Medical Center, which had operated the region’s lone trauma center since 1983.  “Adding new trauma centers will only increase costs for hospitals, taxpayers and consumers.”

Such disputes are becoming more common as hospitals across the country add trauma centers at a record pace, spurred in part by the lure of greater profits. More than 200 trauma centers have opened since 2009 in more than 20 states, and another 75 hospitals are seeking approvals, according to data collected by Kaiser Health News from state health agencies.

States with the greatest number of new centers include Texas, Alabama, Arizona and California. The growth reverses more than a decade of closures in the 1990s and early 2000s.

Leading the trend is Nashville-based HCA, according to state data. Since 2009, it has added or is planning to add about 20 trauma centers, including almost a dozen in Texas and Florida, as part of an expansion of its emergency room business. Another for-profit hospital chain, Community Health Systems, added seven trauma centers in the past three years. 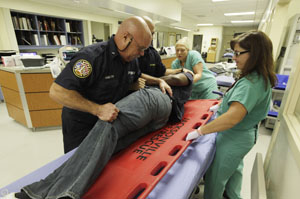 Kevin Hamilton and Jason Maddox, both with Jacksonville Fire and Rescue, work with Trauma Tech Jennifer Browning and Trauma Nurse Marilyn Perez-Horrell to remove the backboard from under an auto accident victim so that they can perform triage in the Trauma Center at Shands Jacksonville (Photo by Bob Self for USA Today/KHN).

Some nonprofits, including Kaiser Permanente and Dignity Health, a large Catholic health system, have also competed with hospitals in Sacramento, Solano, Ventura and San Luis Obispo counties in California to offer trauma services.

How Many Is Enough?

Trauma injuries, usually from car accidents, gun and knife violence, or falls, are the leading cause of death for people under 45.  Victims treated at trauma centers have a 25 percent higher survival rate compared to those seen in hospitals without those services, according to a 2006 New England Journal of Medicine study.

The highest-level centers (known as level 1 and level 2) have specially trained staff and surgeons either on call, or at the hospital 24 hours a day. Many also have their own operating rooms and diagnostic equipment. Lower-level trauma centers (known as level 3, 4 or 5), which account for most of the new centers, typically stabilize a patient and arrange for their transfer to a higher-level unit.

The American College of Surgeons, which verifies the quality of some trauma centers, generally recommends having one or two high-level trauma centers for every 1 million people. But that can vary based on factors such as the distance to the next high level trauma center, the presence of industries such as mining or logging and local speed limits.

While experts say some parts of the country, especially rural areas, need trauma services, they caution that too many higher level facilities in one area can result in higher cost and reduced quality.

When trauma centers operate too close to one another, they compete for specialists and have fewer patients to recoup high fixed expenses for staffing and technology, said Ellen MacKenzie, chairwoman of health policy at Johns Hopkins Bloomberg School of Public Health, who co-authored the New England Journal study.

That can end up costing consumers because hospitals bill insurers to cover their expenses, and insurers pass those on in the form of higher premiums, deductibles and co-pays. 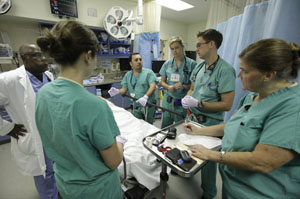 Some trauma centers also get direct support from taxpayers. Shands Jacksonville, for instance, gets funding from the city of Jacksonville to help cover care for the uninsured, and Burkhart indicated they may seek more if competition from Orange Park Medical Center increases their trauma center’s losses, which were $2.7 million in 2010.

The concentration of too many centers in one area can also undermine quality.  Studies show that trauma centers and surgeons who treat a large number of seriously injured patients have better outcomes.

“The more patients trauma surgeons take care of, the better they do in terms of treatment,” MacKenzie said. “But with too many trauma centers, you dilute that effect.”

Hospitals once regarded the centers as guaranteed money losers because of the high cost of delivering round-the-clock specialty care and the large number of uninsured patients.

But that view is changing, especially in suburban communities where patients are more likely to be car crash victims who have health or auto insurance to pay for their care.

“Trauma centers make money,” said Mike Williams, president of the consulting firm Abaris Group in Martinez, Calif. “If a hospital is not making money on trauma, then it’s not structured the right way.”

Hospitals can get higher reimbursements for trauma services because typically, few facilities offer them, and patients can’t shop for where to go in an emergency, Williams said. “Trauma centers can basically charge whatever they want,” he said.

The hospitals which typically lose money on trauma are those based in inner cities that treat mostly uninsured victims of gun or knife violence, Williams said.

But even those benefit from the “halo effect” of the trauma  designation, which helps drive patient demand as consumers perceive the facility provides better care overall, said Casey Nolan, a managing director of Navigant Consulting in Washington.

Another factor that has made the service more lucrative is a “trauma activation fee,” which the hospital charges any time ambulance crews bring in patients believed to have traumatic injuries. The fee is on top of other doctor and hospital charges.  Hospitals say the fee, which has become more common since 2006, helps cover their higher overhead.

While most hospitals charge these fees, HCA’s are significantly higher than others in Florida, where the company has 38 hospitals, according to data filed with the Florida Agency for Health Care Administration. For example, Lawnwood Regional Medical Center in Fort Pierce typically charges a fee of $29,000, and Orange Park, $20,000, compared to $7,000  at Shands Jacksonville.

“HCA does not do anything that does not improve their bottom line,” said Sheryl Skolnick, an analyst with CRT Capital Group in Stamford, Conn.  She said HCA is counting on generating higher reimbursement for caring for the most severely injured patients. In addition, patients treated for trauma often come back for other services, such as rehabilitation, she said.

HCA would not make any of its executives available to discuss its trauma center strategy. In a statement, Orange Park Medical Center spokesman David Goldberg said its new center would help save lives by boosting the percent of trauma patients treated in state-designated centers.  He noted the latest data from 2009 show that about 40 percent of trauma patients in Florida are treated in designated trauma centers, compared to the national average of 65 percent.

State health officials have contended that northeast Florida needs two trauma centers as a result of its large population.

For HCA hospitals in Florida and California, higher profits followed the addition of trauma centers, hospital records show, although officials declined to say how much the new units were responsible.

Lawnwood added a center in May 2009, becoming the only hospital with one between Melbourne and West Palm Beach. The year before, Lawnwood reported about $23 million in profits. In 2010, its profits rose to nearly $32 million. The same pattern occurred with HCA’s Los Robles Regional Hospital and Medical Center in Thousand Oaks, Calif., after it added trauma services in 2010. In 2009, the hospital made $24.6 million in profit. In 2011, its profit soared to $37.5 million.

Public funding has also helped spur trauma center growth. In Texas, dozens of hospitals added trauma units after the state in 2004 began using a surcharge on traffic fines to help hospitals with their uncompensated trauma costs, said Denise Rose, a lobbyist with the Texas Hospital Association.  More than half of the approximately 500 hospitals in Texas now have a trauma center, she said. Most of the 30 added since 2009 are lower-level centers.

In contrast, Florida certifies only the highest two levels trauma centers so only about 13 percent of hospitals have one even with the recent growth. That’s led to conflicts between hospitals competing for the same type of patients.

The new centers opened last year after getting preliminary approval. The case is now being considered by a state appellate court after an administrative law judge ruled in favor of the nonprofits.

Tampa General, which lost nearly $16 million in 2010 on its trauma unit, expects that loss to grow because the new centers would siphon off paying patients from the suburbs. In addition, the number of trauma patients is declining as a result of improved car safety standards, increased use of seat belts and bike helmets, among other factors.

“At a time when we are trying to figure out how to make health care in our community more cost effective, we are just duplicating the costs of infrastructure,” said Deana Nelson, chief operating officer at Tampa General.

Boom In Trauma Centers Can Help Save Lives, But At What Price?