Noting that science has “brought a once-distant dream within reach,” President Donald Trump on Tuesday night pledged to eliminate HIV transmission within 10 years.

“We have made incredible strides, incredible,” Trump said in the annual State of the Union address. “Together, we will defeat AIDS in America and beyond.”

It’s a goal long sought by public health advocates. But even given the vital gains made in drug therapies and understanding of the disease over nearly 40 years, it is not an easy undertaking.

“The reason we have an AIDS epidemic is not just for a lack of the medication,” said Dr. Kenneth Mayer, medical research director at the Boston LGBT health center Fenway Institute. “There are a lot of social, structural, individual behavioral factors that may impact why people become infected, may impact if people who are infected engage in care and may impact or affect people who are at high risk of HIV.”

Health and Human Services Secretary Alex Azar, who provided details of the initiative after Trump’s announcement, said the administration will target viral hot spots by providing local groups more resources, using data to track the spread of the disease and creating local task forces to bolster prevention and treatment.

Neither Azar nor other federal officials who briefed reporters offered cost estimates for the program.

That goal is predicated on growing use of current medications that suppress the virus to such low levels that it is not transmitted during sexual intercourse. PrEP, a drug combination available to individuals with a negative HIV status but may become infected, can reduce their risk of getting the virus by 97 percent, Azar said.”

“This is not the HIV epidemic of the 1990s,” said Terrance Moore, acting executive director of NASTAD, a nonprofit organization that represents officials who administer HIV and hepatitis programs. “We have the tools to end this epidemic.”

Gay and bisexual men made up two-thirds of the nearly 40,000 new HIV cases in 2017, but one clear signal of that difference in the epidemic today is the geography. The nation’s HIV hotbeds are no longer located just in coastal metropolitan areas. In 2017, more than half of the new cases were diagnosed in Southern states. 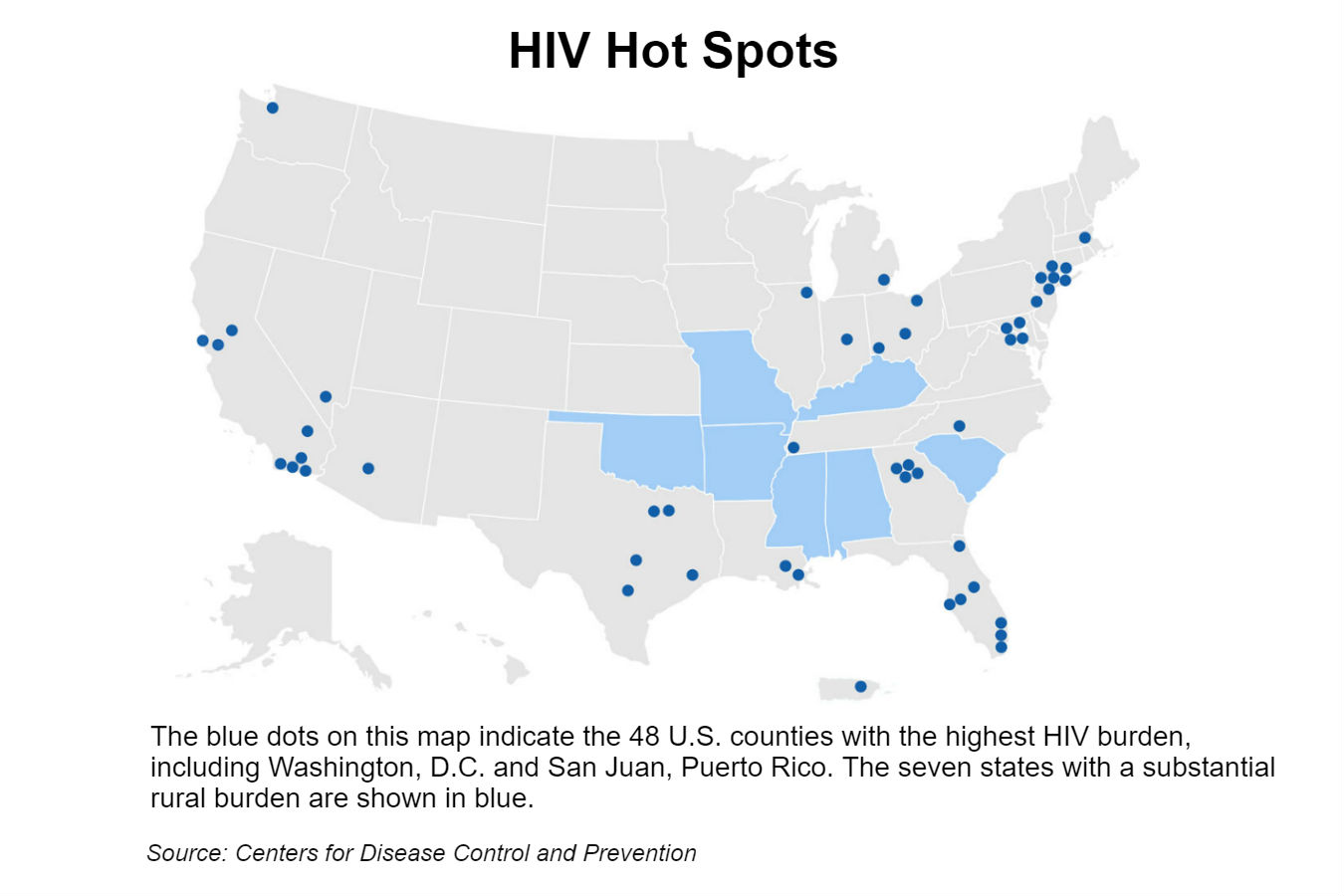 HHS said it will focus its efforts on the heart of the epidemic: 48 counties across 19 states; the District of Columbia; San Juan, Puerto Rico; and rural areas in seven states, many of which are in the South.

Medications alone are not the answer. Lawmakers must have the political will to move forward with policies based in science, said Moore. Existing programs do not provide enough infrastructure to achieve this goal, he added.

“You can’t be simultaneously attacking and undermining the needs of these communities, while claiming that you want to support them and end the AIDS epidemic,” said Scott Schoettes, HIV project director for the LGBT advocacy group Lambda Legal.

The Trump administration has pursued policies that may hinder the president’s goal. And efforts in the South face additional challenges, like higher levels of poverty, difficulty providing health care in rural areas and historical racial tension.

“I don’t think that these things are things that we cannot overcome,” said Greg Millett, vice president and director of public policy at the HIV research foundation amfAR. “But I also think that we need to be very clear about what the obstacles are and to start thinking now innovatively about how we’re going to be able to obviate them.”

Here are some of the challenges that experts said the president’s plan could face.

Comprehensive insurance helps patients access the expensive medications needed to keep the virus under control and vital tests to check on virus levels and white blood cell counts — key health indicators. HIV patients are also often susceptible to infections because the virus compromises the immune system. And they tend to have higher rates of mental health conditions, which could affect their ability to adhere to HIV medication if left untreated.

The Affordable Care Act opened up coverage for thousands of HIV patients with its guarantee of insurance for people with preexisting conditions, but many Republican officials are still calling for the law’s repeal.

In addition, the ACA’s Medicaid expansion led to a substantial jump in the number of people with AIDS who got that coverage, according to the Kaiser Family Foundation. But many states, especially in the South, have not expanded Medicaid. (Kaiser Health News is an editorially independent program of the foundation.)

A federal judge in Texas in December ruled the ACA unconstitutional in a lawsuit waged by a faction of conservative states and supported by the president.

“If you’re not going to provide it through the Affordable Care Act,” Schoettes said, “then there needs to be something that’s as comprehensive in terms of getting people care.

Although the federal government provides some housing assistance for people with HIV, it does not fill the need.

Those who are homeless or have unstable housing have lower access to HIV medications and poorer treatment outcomes.

A study from the Centers for Disease Control and Prevention found that among individuals living with HIV in certain impoverished urban areas across the country, the lower the household income, the higher the rate of HIV in the area.

The federal government provides assistance through a program called Housing Opportunities for Persons With AIDS, known as HOPWA. In 2016, HOPWA changed its  funding formula to better allocate its resources to Southern areas hardest hit by HIV.

However, some of these HOPWA programs have waiting lists that can extend years. The nation is also experiencing an affordable housing shortage, which further limits options for low-income individuals living with HIV and their families.

Experts continue to cite stigma as a key obstacle for treatment. Twenty-six states have laws that penalize an HIV patient for exposing someone to the virus, including 19 that require people who are aware they are infected to notify sexual partners and 12 that mandate disclosure to needle-sharing partners, according to the CDC.

The problems extend to doctors and medical staff. One study, published in 2016, found widespread stigma against HIV patients among health care staff in Alabama and Mississippi, especially among whites and men.

Gina Brown, a community engagement manager for the Southern AIDS Coalition, in part blames the culture of the South, where religious beliefs often clash with gay culture, for perpetuating these problems. “We are still in Bible Belt country, where religion plays a huge part in how we talk about sex or not talk about sex,” she said.

But federal policies, such as the Trump administration’s ban on transgender men and women serving in the military, also play a role.

Federal officials acknowledged these difficulties and affirmed the program would not discriminate against transgender patients.

In addition, minority communities hard hit by the HIV epidemic harbor lingering distrust toward the medical system due to historical abuses such as the Tuskegee syphilis trials, said Mayer.

The scourge of addiction has killed tens of thousands across the nation, spread hepatitis C and is now leading to spikes in HIV transmission, as drug users share needles. In 2015, Scott County, Ind., sought to combat an HIV outbreak fueled by injected opioid use that infected 215 people. Drug use has also been connected to multiple HIV clusters in Massachusetts and Kentucky.

HHS reported that injection drug users accounted for 1 in 10 new HIV cases in 2016.

Expanding syringe exchange programs across the country could minimize this problem, experts said.

“Unfortunately, in the United States we haven’t done as good a job as other Western countries in making sure that those programs are widely available for those Americans who need them,” said Millett.

The CDC and HHS consider syringe exchange programs effective interventions, but some cities, such as Charleston, W.Va., that implemented the programs have now shut them down because of neighborhood complaints, funding concerns and opposition from citizens who object to providing injection equipment.

Federal funds can be used to support this intervention, but these dollars cannot go directly toward purchasing needles.

Trump Pledges To End HIV Transmission By 2030. Doable, But Daunting.