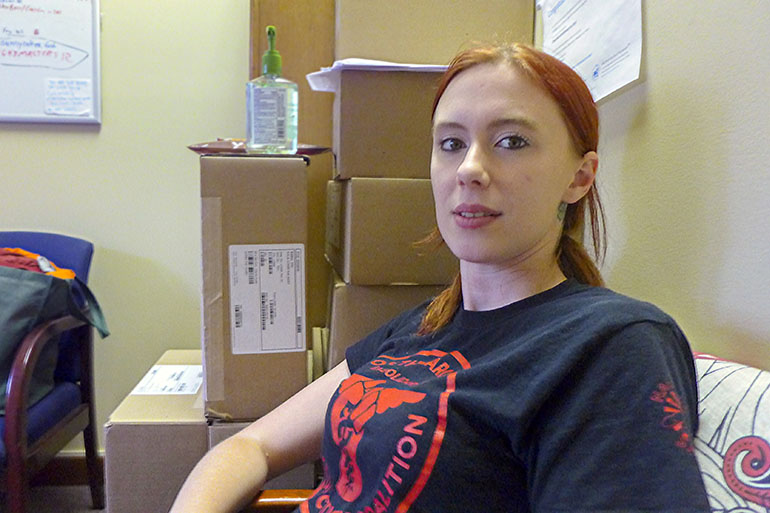 WILMINGTON, N.C. — Former heroin user Kendra Williams, 24, knows she’s lucky. She recalls sharing dirty syringes to shoot up, risking hepatitis C and HIV. More than two years into recovery, she knows about 30 people who have died from drug overdoses — this year. Over the past five, she guesses, it’s close to 50.

Against that grim backdrop, Williams has joined an unlikely coalition — composed of public health advocates, former addicts and the law enforcement officers who used to harass and arrest them — bent on battling sky-high rates of opioid abuse. With the goal of curbing the spread of disease and preventing overdose, the North Carolina Harm Reduction Coalition (NCHRC) has helped legalize needle exchanges, enabled safe disposal of used syringes and enacted protections for people who carry drug paraphernalia.

Such an approach might seem normal in liberal New York or California, and these strategies have long found support in public health and medical communities. Implementing them here — in a tough-on-drugs state with the help of a Republican-controlled Statehouse — is no small task.

“Even five years ago, I wouldn’t have seen this happening,” said Williams, whose hometown is considered one of the worst in the country for opioid addiction. “We’re in the Bible Belt. There are a lot of people that aren’t very friendly to people who use drugs. They get grouped into, ‘waste of time, waste of resources.’”

The shift is at odds with national rhetoric. U.S. Attorney General Jeff Sessions has instructed his state counterparts to take a hard line in the war on drugs, encouraging arrest and jail time for relatively low-level infractions. But even some of the most conservative corners of the country are moving in the other direction, often propelled by a growing awareness among veteran law enforcement officers that they can no longer try to arrest their way out of the problem. 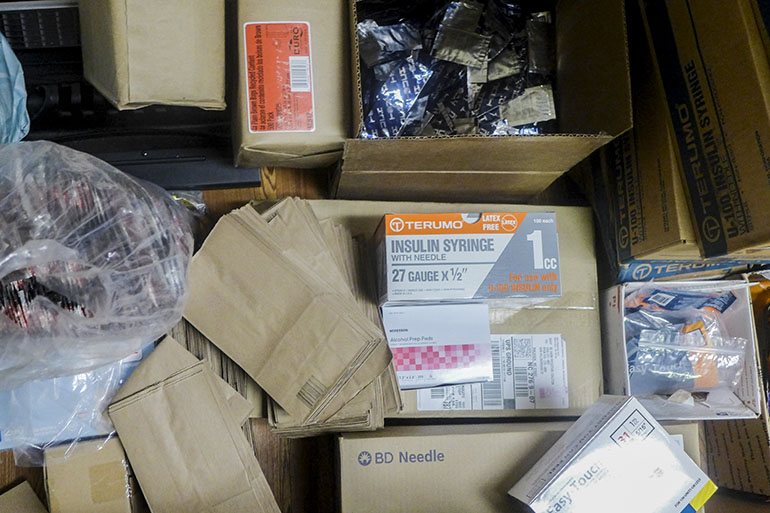 North Carolina legalized syringe exchanges but prohibits the use of public funds to pay for needles. Advocates hope to change that this year, noting it constrains their ability to buy syringes. (Shefali Luthra/KHN)

Kentucky has already legalized needle swaps. Ohio and Indiana have loosened restrictions on the practice. Georgia, South Carolina, Alabama, Tennessee, Mississippi and Louisiana are weighing it.

In North Carolina, NCHRC’s message found a compelling voice with champions like Ronald Martin, a transplanted New York City police detective sergeant who moved here in 2012 and works to educate police departments on why harm-reduction strategies could benefit them. He points out that in states where needle possession has been decriminalized, or where exchanges are legal, officers conducting searches are less likely to get pricked by infected needles. Cops are often on the scene of drug overdoses. They see the toll addiction takes, and they count the bodies.

Support from law enforcement — notably, many well-known sheriffs — was the “golden ticket” for getting harm-reduction laws such as legalization of needle exchanges through the Statehouse, said Tessie Castillo, who coordinates advocacy and communications for NCHRC. That flagship policy won approval in 2016.

There is no data yet indicating what effect the changes in North Carolina’s laws have had on opioid deaths or associated infections. The federal Centers for Disease Control and Prevention, which tracks overdose deaths, found that in 2015 — a year before syringe exchanges were legalized — heroin deaths in the state increased from the previous year by about 46 percent, and opioid deaths in general climbed by almost 15 percent. Rates of hepatitis C also climbed from 2014 to 2016, the state health department reports. Those numbers help explain the state’s shift.

“If you had told me 10 years ago I was going to advocate for syringe exchanges, I’d have said you’re crazy,” said Donnie Varnell, an investigator with the Dare County Sheriff’s Office, in eastern North Carolina.

Changing the mindset and culture among police and lawmakers in North Carolina was hardly simple. After all, harm-reduction advocates are asking the very people tasked with enforcing the law to permit illegal activity. Critics still worry that the new approach enables addiction and legitimizes crime.

Martin travels the state to teach officers about needle exchanges, syringe decriminalization and naloxone — a drug often sold in a nasal spray version as Narcan — that reverses overdoses. Despite his own background in narcotics, he wasn’t originally a harm-reduction evangelist. But after hearing the case NCHRC laid out, he says, he was convinced. His efforts are a break from the traditional emphasis on arresting drug offenders. Martin’s approach instead involves acknowledging that people use illicit drugs and then keeping them as safe as possible.

Martin, a burly 57-year-old, transports visual aids in a Wild Turkey bourbon box, eliciting jokes from fellow police. He peppers his speech with “Star Trek” jokes or, at a workshop this May, references to the new “Guardians of the Galaxy” movie. He describes the course as a safety training: role-playing about de-escalation tactics so cops avoid needle pricks, while sharing his own New York stories. He doesn’t mention the new harm-reduction laws until the presentation’s end, framing them as an obvious precaution. 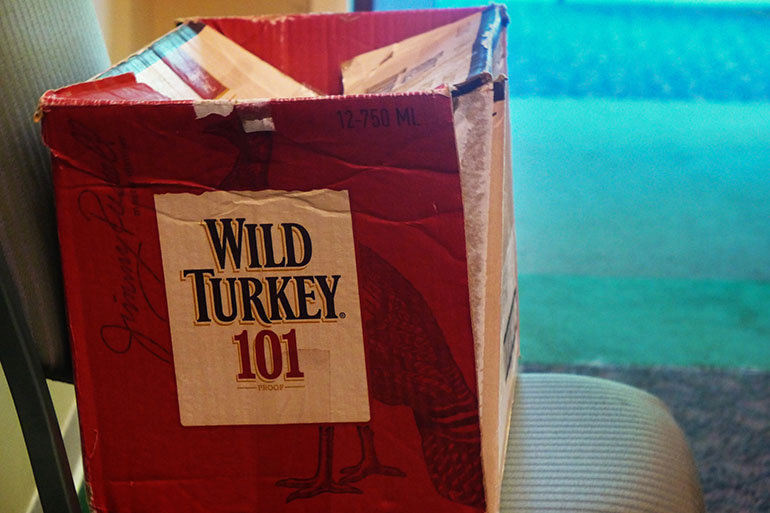 Martin carries visual aids in an old Wild Turkey bourbon box — one of the ways he tries to break the ice with officers he meets. Part of his effectiveness, he says, is that he can talk to officers as a colleague. (Shefali Luthra/KHN)

“I’m taking a needle off the street, so that little Johnny or little Betty doesn’t find it in the parking lot, and I’m giving you a clean one back so you won’t be exposed to HIV or hepatitis C,” he said. “When you keep it relatively simplistic … there’s not this tremendous resistance.”

Cop-to-cop, many officers come around to thinking that harm reduction is logical. Take Brad Shirley, chief of police in Boiling Springs Lakes, a small town near the border with South Carolina. Shirley was initially skeptical, but his police department now keeps a biohazard waste bin outside headquarters, where people can drop off needles anonymously.

Jarryd Rauhoff, an officer with the Fayetteville Police Department, said the idea of syringe exchanges first crossed his radar maybe two years ago. Harm reduction doesn’t match his crime-fighting philosophy, but he’s come to think of the idea as a no-brainer.

“If we’re able to improve the conditions of those people who have addiction — why would we not want to do that?” Rauhoff asked.

In Raleigh, officers are now generally on board with the changes, said Jesse Bennett, who coordinates Raleigh’s exchange. He keeps needles, disposal kits, condoms and naloxone in his car. When meeting drug users unfamiliar with how needle swaps work, he explains cops generally understand the rules: Needle possession is legal if you have an exchange membership card.

He still advises members to call him if an officer seems skeptical. NCHRC will help navigate court proceedings that could follow. 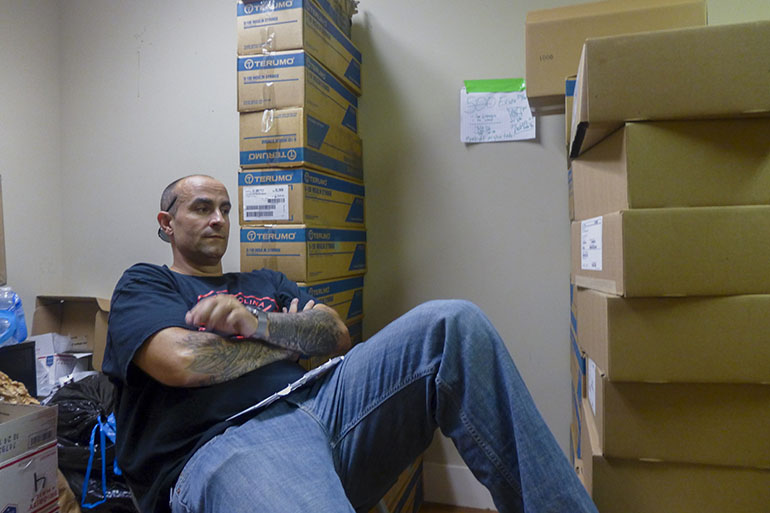 Still, advocates say they face challenges and resistance in fully implementing the strategy.

Chief is the awareness gap: Not all cops are as knowledgeable as the Raleigh squad is. When Martin spoke with 10 officers at a May event two hours outside of Raleigh, none knew needle exchanges were legal. And some maintain that, even with these laws on the books, they will not stop making drug arrests.

Plus, when North Carolina passed syringe exchanges, conservative lawmakers added a provision prohibiting public funds from paying for needles. This legislative session, NCHRC is pushing to get that ban reversed. Until that happens, meeting the demand for clean needles is harder and they must rely on private donations, said Robert Childs, NCHRC’s executive director.

Meanwhile, the new push from the Justice Department could complicate efforts in states looking to push harm reduction, said Daniel Raymond, a policy analyst with the national Harm Reduction Coalition. But he argued that the surge in drug abuse and climbing rates of hepatitis C would still push lawmakers to rethink these kinds of policies.

And for people like Kendra Williams — where this sea change has already begun — the impact is tremendous.

Williams, who focused on getting clean after learning she was pregnant with her now-2-year-old son, Nathan, initially used money from working as a secretary, at a local diner and then at a day care center to buy clean needles from Walgreens for friends. And even after she stopped using, she habitually crossed the street to avoid police officers.

Now, she works with the police and can operate a syringe exchange in plain daylight, without worrying about the consequences. The friends she once worried about, who still use drugs, know where to find help. They can call organizers like her, or dial 911 — something once inconceivable.

“I’ve had a friend go up to a cop and say, ‘I know y’all are carrying Narcan now. I need to find help,’” she recalled. “That was pretty cool.”