The health care overhaul provides a safety net for young adult children, who can now stay on their parents’ health plans until they reach age 26. But it doesn’t guarantee that their parents’ plan will cover a common medical condition that many young women face: pregnancy. 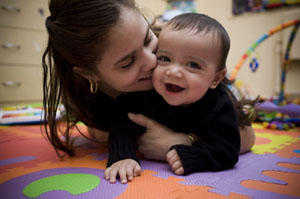 Although hard numbers aren’t available on how many companies don’t provide dependent maternity benefits, “I would say it’s common,” says Dania Palanker, a senior health policy adviser at the National Women’s Law Center. And the number could grow with the recent expansion of coverage to children under age 26, she says.

In 2008, an estimated 2.8 million women ages 15 through 25 got pregnant, 12 percent of all those in this age group, according to researchers at the National Center for Health Statistics. (That is the most recent year for which there are pregnancy estimates.)

When Wendy Kline learned this spring that her 17-year-old daughter was four months pregnant, she took her to the doctor for prenatal care. Her insurer denied the claim, citing her employer’s policy not to cover maternity care for dependents.

“At that point my jaw hit the floor, because I did not know how we were going to pay for this,” Kline says.

Kline asked her company, a medical equipment retailer in Martinsburg, W.Va., to change its policy. But company officials turned the 26-year veteran employee down.

“You work all your life and pay these insurance premiums,” she says. “Then you ask for help and can’t get any. It’s just so unfair.”

In some states, a pregnant young woman might qualify for Medicaid, the federal-state health-care program for low-income individuals, even if she lived at home with her parents, say experts. But when Wendy and her husband, Andy, investigated, they were told that eligibility would be based on their household income, which was too high to qualify for Medicaid.

So far, their daughter’s pregnancy has been uneventful, and doctor visits and lab work have totaled $300. But the Klines know the big bills are yet to come. Andy recently took out a $2,000 loan from his 401(k) to put toward the hospital bill. It’s a start.

According to the March of Dimes, the average cost for uncomplicated maternity care was $10,652 in 2007. That includes prenatal care, a routine delivery and three months postpartum care.

In 2010, researchers at the Center for Business and Economic Research at Marshall University in Huntington, W.Va., published a report that analyzed the costs associated with providing mandatory maternity coverage for dependent minors in West Virginia.

Teenagers, the report noted, are less likely to get early prenatal care, more likely to smoke and less likely to gain enough weight during pregnancy. Thus, they’re more likely to deliver prematurely, resulting in more complications, including a higher incidence of low-birthweight babies. The medical costs for such an infant is nearly 10 times higher than for a baby of normal weight, the report found ($32,325 vs. $3,325), citing March of Dimes data from 2009. Similarly, getting prenatal care sooner rather than later saved as much as $3,200 in medical costs per person.

Ensuring that young women have access to prenatal care and other maternity services is “definitely cost-effective,” says Jennifer Price, a senior research associate at the center and the lead author of the study. “But it’s such a polarizing issue.”

The health-care overhaul provides assistance to some young women who become pregnant while on their parents’ plans. Under the law, preventive health benefits that are recommended by the U.S. Preventive Services Task Force, a federal agency, must be covered by new plans and by plans that have changed enough to lose their status of being grandfathered under the law. The recommended services include a range of screenings for pregnant women, including those for anemia, hepatitis B and Rh incompatibility.

In addition, starting this month, when a non-grandfathered health plan begins its new plan year, it must provide certain other women’s health services at no charge, including an annual well-woman visit, screening for gestational diabetes and breast-feeding support, supplies and counseling.

Starting in 2014, maternity and newborn care is one of 10 so-called essential health benefits that must be offered by all health plans in the individual and small-group markets, including those that are sold through the state-based health insurance exchanges that will be up and running then.

Large-group plans, however, are exempt from the requirement to provide the essential health benefits, now or in 2014.

But advocates say that companies and insurers should cover maternity care even if they’re not required to. “For young girls, this is a basic health benefit that they need,” says Debra Ness, president of the National Partnership for Women and Families. “Why would they deny them access to a health benefit that’s so essential?”