A doctor’s training hasn’t historically focused on sensitivity. And too often while juggling heavy workloads and high stress, they can be viewed as brusque, condescending or inconsiderate.

A 2011 study, for instance, found barely more than half of recently hospitalized patients said they experienced compassion when getting health care, despite widespread agreement among doctors and patients that kindness is valuable and important. 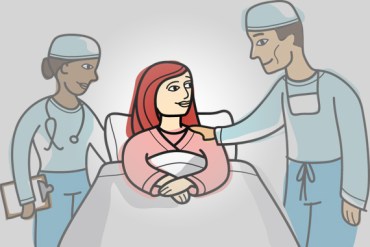 But payment initiatives and increasing patient expectations are slowly forcing changes, encouraging doctors to be better listeners and more sensitive to patients’ needs.

“We train people to ask the question, ‘What’s the matter?’ We train toward diagnosis,” said Martha Hayward, who leads public and patient engagement efforts at the Institute for Healthcare Improvement, a Massachusetts-based nonprofit. “We don’t train toward lifestyle understanding.”

Many medical centers across the country are striving to improve doctors’ bedside manner. Even some physicians in private practice are working to improve.

Much of the motivation is financial. Under the 2010 health law, Medicare payments to hospitals can be affected by patient satisfaction surveys.

The trend is also fueled by consumer demand. As patients pick up an increasing share of the cost of care, they’re becoming more particular about quality and experience and choosing doctors accordingly.

The University of Michigan, the Cleveland Clinic and some Catholic health systems are among medical systems experimenting with techniques to encourage physicians to be more responsive, said Tim Vogus, an associate professor of management at Vanderbilt University who has researched the relationship between compassion initiatives and patient satisfaction scores.

That research, led by Laura McClelland, an assistant professor of health administration at Virginia Commonwealth University, found that hospitals that promote compassion – especially with rewards — are more likely to have higher patient satisfaction scores.

Partners HealthCare in Massachusetts and medical schools such as Duke are requiring some residents to take courses to help them be empathetic and offering training to practicing physicians. Other medical organizations encourage physicians to put personal details about patients in their medical charts so they can bond over topics like hobbies or sports teams. Some urge doctors to send handwritten follow-up notes to patients and their families, according to a survey of 35 health systems published this March by the Schwartz Center, a Massachusetts nonprofit that promotes compassion in health care.

Small gestures, like a follow-up phone call from a doctor, go a long way, said Matthew Taylor, 57. After his daughter was prescribed new medication for her anxiety and depression, the doctor called to check up on her.

“That [the doctor’s office] considered it important — even if it’s only taking 30 seconds or a minute of time to say, ‘Are things going well? Is there anything we need to be concerned about?’ — shows that they’re paying attention to things they need to be doing,” said Taylor, who lives in Mount Airy, Md. “It’s not out of sight, out of mind.”

Such small behavioral modifications aren’t “a panacea,” the Schwartz Center researchers noted in their paper. But they can improve patient experience.

Doctors working in hospitals are at the forefront of the efforts, often because of the patient surveys’ effects on Medicare payments. But health staffers also need to know how patients view them, so they can figure out what actually works, experts said. At the Cleveland Clinic, employees get a quarterly report that includes feedback from patients’ reviews, said Adrienne Boissy, chief experience officer. If they do things patients dislike, they’ll find out and can adjust.

“If you really don’t get any feedback on your ability to communicate or be empathic,” she said, “you won’t think you have a problem.”

At the University of Rochester Medical Center in upstate New York, doctors who demonstrate compassion are recognized in monthly notes the department head sends out to the hospital’s faculty. Those notes are often based on patient evaluations, which mention, for instance, listening well, spending extra time at a bedside and answering questions in ways the patient can understand.

“These practices are pretty simple things – recognizing people publicly for giving especially compassionate care,” Vogus said. And they can pay off in higher patient satisfaction.

At Rochester, physicians can get coaching. Other doctors watch them practice and work one-on-one with them to help them talk to patients. After shadowing, the coach might talk the doctor through interactions that could have been more thoughtful; then, depending on the critique, they might role-play scenarios based on that conversation.

It’s hard to say whether factors like age make a difference, she said. Some older doctors are less enthusiastic about changing their ways, but often, they “know better how important good communication is, because of their years of experience,” McDaniel said. Younger doctors are likelier to have had some kind of communication training in medical school, but that doesn’t necessarily mean they’re always better at talking to patients.

“I don’t think I’ve ever in my medical career – this included medical school – had somebody observe me to this degree,” said Jonathan Friedberg, Rochester’s chief of hematology and oncology, who participated in the program. He has since noticed small changes, he said, in how he interacts with patients. The exchanges have become less rote and routine, and more of a conversation.

“Empathic care is a real intervention that has impact on patients’ adherence, whether they’ll come back to see the doctor or just skip town and go untreated,” said Stephen Post, who directs the Center for Medical Humanities, Compassionate Care and Bioethics at Stony Brook University in New York. And listening more carefully could lead physicians to pick up cues and details they might otherwise miss, and consequently prescribe better treatments.

When that thoughtfulness is absent, patients can be turned off. Harvest Moon, 42, who lives Grand Prairie, Texas, found a new doctor condescending and dismissive during a visit in August. She was so upset she forgot to ask about the problem that brought her in and left reluctant to get follow-up care.

“I was feeling obstinate,” she said. “It was almost a way to get back at him.”

When talking with a patient, doctors need to do more than just run through a list of questions. “It’s important to train physicians not to just ask about a patient’s medical history and medications but to make a meaningful inquiry,” Post said.

Doctors can easily forget to listen, Boissy said. Even in her own experience, she’s seen doctors who don’t introduce themselves when they walk into the exam room – a small gesture, but one that helps establish trust and gets patients to open up.

“It’s not that they don’t care. There’s a depth of caring,” she said. “But they forget.”

Under Pressure, Hospitals Push Physicians To Improve Their Bedside Manners