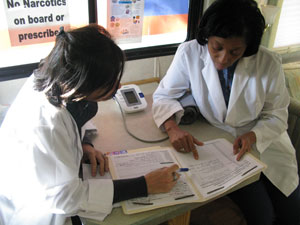 The national debate over health care appears to be taking a back seat to jobs creation – but the problem persists for people who have jobs but no health insurance.

As part of our series “Are You Covered,” we check back in with Fernando Arriola, a contractor in New Orleans who can’t get health coverage. He’s adopted an unconventional approach to medical care and is now working to set up a clinic for the uninsured.

Winter (what there is of it in New Orleans) is the slow season for Arriola’s construction firm. So late last year, he took care of a nagging medical problem.

“I had a minor surgery,” he says. “[It] wasn’t anything big – just had a growth removed. So I went to Guatemala. It cost me a grand total of $80, including the doctor visit. I was able to save some money. I couldn’t even pay for the doctor visit over here.”

More On The Uninsured

Arriola is a naturalized citizen who has called New Orleans home for 40 years. But his regular doctor these days is in his native Guatemala. So when he goes to visit family, he gets care and stocks up on his blood pressure medicine.

The 58-year-old self-employed businessman gave up his health coverage after Hurricane Katrina to save money when times were tough. When he tried to reinstate the policy, he was denied. Arriola had hoped Congress would allow people like him to buy into the Medicare system a little early.

“See, I’m willing to pay for what I am getting,” Arriola says. “That’s not the point. It’s just that I cannot even get it.”

He’s frustrated that politicians can’t seem to agree on a fix.

Hope For The Uninsured

For his part, Arriola has been trying to do something locally by serving on the board of directors of a fledgling health clinic for uninsured workers: the New Orleans Faith Health Alliance.

At First Grace United Methodist Church in the Mid-City neighborhood, a construction crew is transforming Sunday school classrooms into exam rooms. The full clinic won’t be ready until late spring, so for now a small, windowless choir room serves as a makeshift exam room. 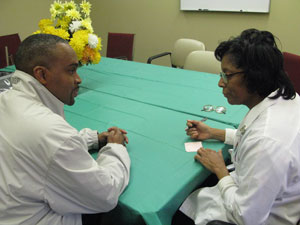 Nurse practitioner Gwen George is taking Lee Hardy’s blood pressure. It’s a little high. He tells her he was diagnosed with high blood pressure five years ago, before Hurricane Katrina.

Hardy is a morning show producer for a local AM radio station that does not provide health insurance. He had hoped Congress would create a public health plan.

“People think that it’s for other people out there that don’t want to work and people who are just lazy bums,” Hardy says. “I stand before you as living proof that that’s not the case. I mean, I work hard.”

And it’s been that long since he’s seen a doctor, even though his previous job was as a marketing director for a home health care agency.

George says Hardy is typical of the clinic’s patients. Most have chronic health problems, like high blood pressure or diabetes, and have gone for years without care. Katrina devastated the city’s health care system, including Charity Hospital. Even today, she says, there are few treatment options unless you wait for hours at a free clinic. 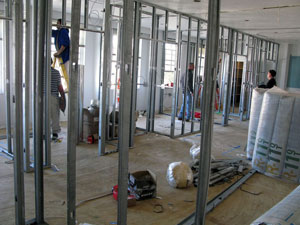 “And when you have a job, you really can’t wait 10, 12 hours to be seen because you’ll no longer have your job,” she says. “And so they’re really forced to have no care at all, or a place like this where they can get care.”

Since November, the New Orleans Faith Health Alliance has been seeing patients three half-days a week, addressing a mere fraction of the need in this city, where so many work in industries that don’t offer coverage – like construction and hospitality.

‘The Reality Of New Orleans’

Clinic director Luanne Francis says there are about 80,000 uninsured workers in the New Orleans metro area.

“We are specifically focused on serving these people,” Francis says, “because we believe these people are falling through the cracks and go a long period of time without seeing a provider.”

But it’s not a free ride. Patients must join, or become members by paying a fee based on their income. And they pay for each visit.

When Lee Hardy emerges from the exam room after an hourlong consultation, he calls the clinic “a blessing.” He says he’ll be recommending it to friends and colleagues.

“A lot of people I know are employed and not insured,” says Hardy. “That’s the reality of the New Orleans that we live in, particularly post-Katrina.”

The New Orleans Faith Health Alliance has signed up 15 members so far. And the newest is Arriola, who says the clinic will help him with routine matters such as his blood pressure. But he’s still concerned about major medical issues.

His plan for now? “Pray that nothing happens,” Arriola says.

At least not until he’s 65 and qualifies for Medicare.

As Focus Shifts To Jobs, The Uninsured Seek Solutions