BALTIMORE — There is little in Ruby’s life that is easy. Nearly blind and unable to walk more than a step or two, the 39-year-old struggles to raise three sons while dealing with a daunting array of health conditions, from diabetes that recently landed her in the hospital to pain from bulging spinal disks.

Without support, odds are she’ll end up back in a hospital. But Ruby, who asked that her last name not be used to protect her family’s privacy, is part of a growing effort to reduce those odds by arming home care aides and other non-medical workers with the power of data.

On a recent Monday, health coach Nhaomie Douyon visited Ruby in the small, rented two-story row house where she lives with her children. Douyon works for the Coordinating Center, a Maryland-based nonprofit that helps organize medical and social needs for clients like Ruby, who live in designated medically underserved areas.

The two chatted in the living room, where a couch and chairs share the space with a bed. White curtains obscure the view outside, where small groups of young people cluster on front steps and some homes have boarded-up windows. Douyon, 28, came equipped with a tablet loaded with a software program that uses predictive analytics to generate patient-specific questions.

The software was developed by Care at Hand, a privately held firm that is among a small but growing number of companies touting products they say can help spot potential medical problems before they require hospitalization. The software was created for use by non-medical workers like Douyon and home care aides who care for millions of elderly, ill or disabled people.

Skeptics note that there are few studies confirming whether the technology accurately predicts problems, prevents hospitalizations or saves money. Still, the business has attracted the attention of venture capitalists and may lead to more health care applications for consumers.

Was Ruby having trouble paying for her medications? Did she feel nauseous? Were her ankles more swollen today? Those were some of the 15 questions the program Douyon’s agency uses generated for Ruby. 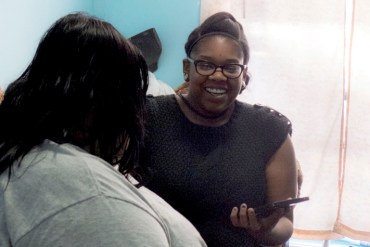 Health coach Nhaomie Douyon of the Coordinating Center asks her client, Ruby, a series of questions generated by a special software program loaded onto her tablet as part of a program aimed at preventing avoidable hospital readmissions with high-risk patients. (Julie Appleby/KHN)

When she typed in Ruby’s answer that her ankles and legs were definitely more swollen, it triggered an alert to the nurse manager back at her office. Within a few minutes, nurse Chris Parsons called from the Coordinating Center’s headquarters, asked more questions and directed the pair to contact Ruby’s doctor’s office for medicine that might help. Try to elevate your feet, she told Ruby, and go to the emergency room if the swelling gets worse.

“It’s like bringing a pocket nurse Chris with you,” said Douyon, who is also studying for a master’s degree in public health and has previously worked for groups doing health outreach in Ghana and Haiti.

“It doesn’t just go through medical questions but asks about resources they might need and helps us pick up on certain red flags or the barriers they face,” she said of the tablet.

Another firm, eCaring, is aimed more squarely at home care aides and their agencies. The company’s software allows aides to note a patient’s well-being hour by hour, using colorful icons, such as a toothbrush for recording personal care activities and a happy or sad face for documenting their mental state. It, too, uses the information to predict which patients might be at high risk and send an alert back to a care manager.

“It’s a portrait of what is going on in the home,” said Robert Herzog, CEO and founder of eCaring, a privately held firm that has contracted with home care agencies in New York to use its software programs. “It transforms the home from a black box into a data-rich environment.”

Other firms, such as Honor in California and Hometeam in New York, offer more consumer-directed services, such as apps that home care aides use to log their daily observations. The companies have each drawn low, double-digit million dollar funding from well-known venture capitalists, including Marc Andreessen, a cofounder of the Silicon Valley venture firm Andreesen Horowitz, Yelp cofounder and CEO Jeremy Stoppelman, and emerging technology investor Lux Capital. The apps help families hire and schedule home care aides, and then keep the family informed about how mom is doing with texts, pictures and updates on daily activities.

One big question is who will pay for the technology? Agencies using programs aimed at consumers can build the cost into their home care services, charging consumers more than agencies that didn’t use the technology. Herzog at eCaring says his firm pays for the tablets and gets a low-cost data package for internet use — which the tablets require — from Verizon. It then builds those costs into its contracts with hospitals or insurers. The Coordinating Center, which uses Care at Hand in Baltimore and other locations in Maryland, similarly builds those costs into its contracts. It also receives grant money from the state and other agencies for its care coordination efforts.

Thomas Scully, the former top administrator at the Centers for Medicare & Medicaid Services and now an attorney who advises clients on health care issues and a general partner in a private investment firm, said the idea behind these firms is good. But, he added, their growth potential may be limited because the expense of the tablets and software will make the home care services more expensive. “All of this is part of the answer, but it has to show economic savings,” said Scully.

Watching For Evidence Of Success

Billions are spent nationally each year on avoidable hospital admissions, prompting measures to prevent more of them. The federal health law, for example, created financial incentives for hospitals to reduce readmissions.

The new software fits into this focus. But obstacles remain, including the big question of whether they actually work better than other efforts aimed at this goal.

The companies themselves — mainly small, privately held ventures — say they have data showing significant reduction in hospitalizations and costs.

“Non-medical workers are able to make some guided observations that predict if a patient will be at risk of going to a hospital,” said Andrey Ostrovsky, a doctor who is CEO and founder of Care at Hand.

For example, a study done by consulting firm Avalere, with Ostrovsky co-authoring, reviewed the records of more than 2,200 patients using the technology. It concluded that hospital admissions dropped 29 percent for patients who had three or more hospital visits the prior year. It showed an overall 14 percent decrease in admissions among all those studied.

But not everyone is convinced that arming home care workers with software programs will prove to be an effective strategy.

“It’s more theory than reality,” said Bob Kocher, a partner at Venrock, a venture capital firm in California. After reviewing the firms out there, Kocher said his firm decided not to invest yet, although “I have no doubt that 10 years from now, we will improve the training of home care workers and have much better diagnostic tools in the home — and it will work.”

Still, the ranks of elderly Americans are growing rapidly and most want to avoid nursing homes. “The industry is placing a big bet that technology will be the missing variable … to allow us to care for a large elderly population at home,” said Jared Landis, practice manager at the Advisory Board, a firm that consults with hospitals.

’Just One Tool’ In A Larger Effort

For Ruby, the tablet is just one piece of a much larger effort by the Coordinating Center, which has also enrolled her in the practice of a local primary care doctor, signed her up for an appointment at an eye clinic and is seeking an alternative to a medication she was prescribed that wasn’t included on her insurance plan.

She is motivated: “I want to be here to see my kids walk across the stage at high school graduation, to see when they have kids.”

That combination — a motivated patient and a broad effort to coordinate her care — may help prevent Ruby from returning to the hospital with high blood sugar levels or other problems.

“The tablet is just one tool. We were reducing readmissions without it, but when we implemented it, we were able to squeeze out a little more,” said Carol Marsiglia, senior vice president of strategic initiatives at the center.