It’s not just veterans who are having trouble with health care. Now the health system for active duty military is under the microscope, too.

Longstanding issues with an overburdened system for caring for the nation’s veterans have burst into the news recently, particularly with allegations of fraudulent record-keeping to hide the size of the waiting list for care at the Phoenix Veterans Affairs Health Care System. 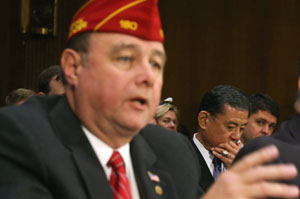 And just this week, Defense Secretary Chuck Hagel ordered a 90-day review of quality issues in the military health system. That action came following two unexplained deaths at an Army hospital in North Carolina that led to the sacking of several top officials there, although Defense officials said the actions were unrelated.

What is the VA health system?

The Veterans Health Administration, part of the Department of Veterans Affairs, is a system of approximately 1,700 hospitals, outpatient clinics, counseling centers and long-term care facilities that provides care to nearly 9 million veterans annually. Congress has appropriated $55.6 billion for VA health care services and facilities for the fiscal year that starts Oct. 1. Unlike Medicare, where the federal government pays for care provided by private doctors and hospitals, VA facilities are owned and run by the federal government, and its health care providers are largely, although not exclusively, government employees.

Through agreements with various medical, dental and other medical education programs, the VA has become the single largest provider of health care training in the country. In 2013 VA facilities participated in the training of more than 63,000 doctors and dentists.

Who is eligible for VA health services?

Just about any individual who serves on active duty in the armed forces and is discharged other than dishonorably is technically eligible to receive health services from the VA.

But because demand far outstrips capacity, the VA health system, under orders from Congress, created a priority system to provide care to those deemed most in need. The top priority group consists of those who are more than 50 percent disabled as a result of their military service and/or deemed unemployable due to conditions connected to their service. The second group are veterans with slightly less severe disabilities;  the third group  includes those who are former POWs or who were awarded Purple Hearts or Medals of Honor. There are currently  eight groups; rankings include not only health status, but also income and age.

Dependents of veterans who are permanently and totally disabled or who die of a service-connected disability can qualify for CHAMPVA, a health insurance program that largely uses private doctors and hospitals to provide care. Unlike active-duty military, most other veterans’ dependents do not qualify for government-paid or subsidized care.

Why is the VA so overburdened right now?

This is at the heart of the current debate, but there is general agreement that a number of factors are converging to put significant pressure on the VA health care system. One is simply the aging of baby boom-era Vietnam veterans, whose medical needs are increasing.  Another is a large influx of wounded warriors from more than a dozen years of combat in Iraq and Afghanistan with  serious disabilities. A third factor is recent changes in the law making it easier for veterans who were exposed to the herbicide Agent Orange or to hazardous substances in Iraq and the areas around the Persian Gulf to qualify for benefits.

How does the Department of Defense provide health services to active duty members of the military and their dependents?

The military – the Army, Navy, Air Force, Marines, and Coast Guard – has its own integrated health care system known as the Military Health System. In addition to providing medical care in combat situations and at bases overseas (as well as on ships), the system has 57 hospitals and 400 clinics.

The military also has its own medical school, the Uniformed Services University of the Health Sciences, in Bethesda, Maryland, on the campus of what was the Bethesda Naval Hospital and is now the merged Walter Reed National Military Medical Center. The university trains doctors, dentists, nurses and PhD scientists.

Like the VA, however, the military’s health facilities cannot accommodate the demand for care by all active duty service people, their dependents, and retirees (many of whom are not eligible for VA services). So it has its own government-provided insurance plan, called TRICARE, for those who cannot get care at a military health hospitals or clinics.

TRICARE, much like Medicare, is insurance that is paid by the government, but uses private doctors and hospitals. In fact, TRICARE rates are tied to Medicare rates.

FAQ: VA And Military Care Are Different, But Often Confused