Once a month at the Veterans of Foreign Wars building in Sacramento, a couple dozen former soldiers, many with white hair tucked under their service caps, stand and salute as they take up matters close to their communities.

For discussion at a recent meeting: proper burial services for homeless veterans and a Harley Davidson motorcycle BBQ fundraiser. Also on the agenda: California’s Proposition 61 — a controversial measure on the November ballot that aims to rein in prescription drug prices.

Meghan Callahan, who works for a Sacramento public affairs firm paid to help defeat the measure, was there with a simple message for the group: “It’s going to hurt vets,” she said. “We’re really hoping we can work with all of you in the room to help get the word out. Take these brochures with you, pass them on to veterans.”

Military veterans are being enlisted as key foot soldiers in the campaign to defeat Prop. 61, which would prohibit California state agencies from paying more for a prescription drug than what the Department of Veterans Affairs pays.

The pharmaceutical industry has contributed $86 million to convince California voters to defeat the measure, fueling the state’s highest-funded initiative campaign. The opposition’s strategy in the closely watched contest specifically has included reaching out to veterans groups for help, including advertising in their publications and exhibiting at veterans events.

“Veterans rank alongside firefighters, police officers and teachers as the best brand names in a ballot proposition fight,” says University of California, San Diego political science professor Thad Kousser. “There aren’t enough veterans in California to swing a statewide ballot proposition, but there are clearly enough people who love and trust veterans to swing a campaign.”

Backers of Proposition 61, the California Drug Price Relief Act, have recruited one national veterans group, VoteVets, in support of the initiative and has launched an ad to appeal to veterans too, although their spending so far doesn’t appear targeted to veterans.

Twenty-eight veteran groups oppose the measure, the vast majority of which are based in California.

In general, supporters have been vastly outspent by the opposition. The proposition’s author, the AIDS Healthcare Foundation, has contributed much of the $9 million dollars raised so far to pass it. Backers say Proposition 61 could save the state billions of dollars a year by controlling drug prices in programs including CalPERS and Medi-Cal, with some exceptions.

“Californians deserve to not be gouged” by high drug prices, said Roger Salazar, spokesperson for the Yes on Prop 61 campaign.

Opponents say the measure would end up increasing prescription drug costs for veterans and everyone else, and reduce patient access to needed medicines. Citing a VA memo, they say that pharmaceutical companies could stop giving the federal agency discounts to make up for the lower amounts California would be paying to the industry.

Despite the hefty spending against the measure and veterans’ significant opposition, a University of Southern California-Los Angeles Times poll in early September found that about two-thirds of California voters surveyed supported the proposition.

Still, the war isn’t over. Both sides are deploying veterans’ sympathetic and trusted image to win over voters.

In one video tweeted by the No on Prop 61 campaign, a veteran speaks over somber music, suggesting that veterans would have to pay more for prescription drugs. “If this [measure] does pass … it’s either dinner on the table for their family, or their medicine.”

A Yes on Prop 61 campaign video takes aim at drug companies. Veterans speak into the camera, accusing the companies of “scaring vets” into listening to their “self-serving lies.”

The No on Proposition 61 campaign has brought in the most money of any of the state’s 17 ballot initiatives, according to Maplight, a nonpartisan research nonprofit that assesses the influence of money in politics.

The consulting firm of Anthony Principi, the former Secretary of Veterans Affairs, has so far received $56,250 from the No campaign. And Pete Conaty, a long-time Sacramento lobbyist for veterans, has received more than $36,000 to reach out to veterans groups like the ones at the Sacramento meeting. Conaty says he had opposed the measure before he was hired by the campaign. 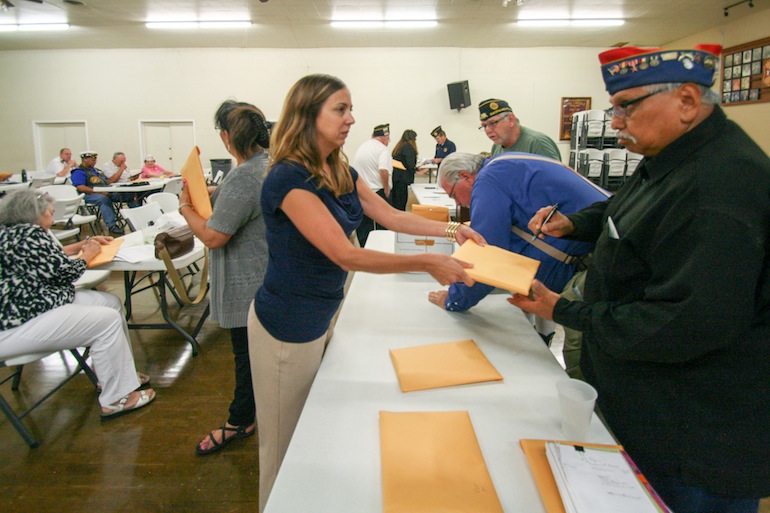 Meghan Callahan hands out envelopes of No on 61 campaign materials to veterans at a Sacramento Veterans Affiliated Council meeting on Sept. 1, 2016. Callahan works for a media relations firm paid by the campaign, which has received more than $86 million dollars from pharmaceutical companies. (Pauline Bartolone/California Healthline)

Kathy Fairbanks, spokesperson for the No on Prop 61 campaign and a partner at the same public affairs firm as Meghan Callahan, says it’s not only working with veterans to fight against the measure. Organizers have built a broader coalition, including mainstream physician organizations, business and labor organizations.

“Veterans clearly are an important part of our campaign,” said Fairbanks. “But they’re no more important than the rest of the … coalition.”

The campaign comes amid a national furor over drug prices, fueled most recently by the increasing costs of EpiPens to treat allergic reactions.

A Legislative Analyst’s Office review of Proposition 61 could not pin down potential savings or costs if the measure passes, citing uncertainty over how the measure would be implemented and how drug makers would respond to the price cuts.

That veterans are being recruited as part of the drug-industry-backed opposition to Proposition 61 doesn’t bother Vietnam veteran Don Harper, who attended the recent Veterans Affiliated Council meeting in Sacramento. That’s the right side to be on, he said.

The No campaign’s visit earlier this month wasn’t what turned the 69 year-old veteran against the measure, he said. Many of the veterans’ organizations opposed to the measure established their positions months ago.

“It’s going to raise prices for disabled, low-income and all veterans who are using VA care,” said Harper, who is the Legislative Commission Chair for the American Legion in California.

Harper and the No on 61 campaign argue that if the measure passes, the VA could face an added $3.8 billion in costs per year.

“It’s morally wrong,” Harper said. “We fought for these benefits for a long, long time.”

Harper believes veterans have been burned by similar policies in the past. When the Omnibus Budget Reconciliation Act of 1990 (OBRA) extended VA pricing to state Medicaid programs, veterans’ prescription prices “went up in a big way,” said Harper. But when the Government Accountability Office analyzed the change,  it could not determine if the VA pricing extension was responsible for the higher costs.

“We don’t want a free ride, but [we want to be] recognized as a special group, that deserves special benefits,” said Harper.

An earlier version of this story misstated the amount that California agencies spent on drugs in 2014-2015. It has been corrected to say “billion.”