Hospitals need to focus more on reducing preventable errors and infections and the government must create more economic incentives to improve patient safety, Vice President Joe Biden said at a conference in Irvine, Calif. over the weekend.

“Up until now, our health care system, in my humble opinion, hasn’t sufficiently linked quality … with safety,” he said. “Not enough time has been focused on keeping bad things from happening.”

But Biden said the paradigm is starting to change. Hospitals are now penalized for unnecessary readmissions and new technology alerts nurses of possible problems and reduces the reliance on handwritten doctors’ orders. 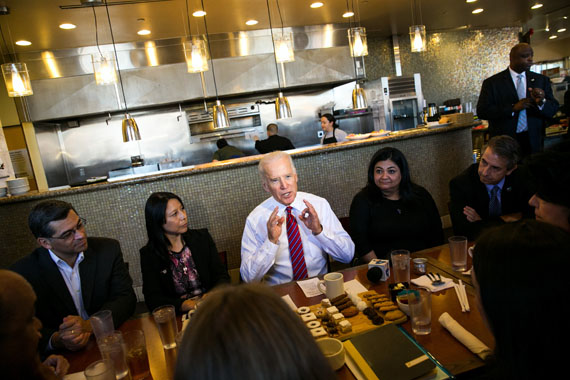 Vice President Joe Biden meets with health care officials for a talk at the Homegirl Cafe on January 23, 2015 in downtown Los Angeles, California.

Gains have been made in improving hand hygiene and reducing central line infections, he said. And a recent government report by the Agency for Healthcare Research and Quality found that 1.3 million fewer hospital-acquired conditions occurred – and 50,000 fewer deaths – in 2013, compared to 2010.

“This is the time to double down on your commitment to patient safety,” he told the crowd of doctors, nurses, hospital executives and patient advocates. “We’ve gone from accepting the inevitable to showing what’s absolutely within our wheelhouse to be able to change.”

The conference was sponsored by the Patient Safety Movement, an organization aimed at reaching “zero preventable patient deaths by 2020.” There were panels on patient involvement, on lessons learned from Ebola and on measuring hospital efforts to improve safety.

Alicia Cole, who attended and spoke at the conference, has spent years recovering from multiple hospital-acquired infections. She went into a Burbank hospital in 2006 for a simple surgery to remove small fibroids and ended up with a staph infection, sepsis and flesh-eating disease.

“Instead of getting better, I deteriorated,” Cole said. She has had numerous additional surgeries, had to stop working and still sees a doctor weekly. “My life completely changed.”

Bialick said he appreciates the government’s renewed focus on the issue. For instance, its Partnership for Patients program is working with 3,700 hospitals across the nation to reduce preventable infections and readmissions.

Much of the discussion at the conference focused on sepsis, a blood infection that costs the health care system more than $20 billion annually and has a mortality rate of up to 50 percent. Several hospitals, including UC San Francisco, have programs aimed at identifying victims early.

Chris Fee, associate professor of emergency medicine at UCSF, said reducing sepsis deaths is about recognizing symptoms in patients and getting treatment started as soon as possible. Technology can be key in alerting hospital staff of abnormal vital signs and lab tests he said.

“We have to remember that patients can be very ill and look quite well,” Fee said.

The UCSF project started as a pilot and has since expanded to the entire hospital. Fee said it is credited with reducing mortality from 18 percent in 2012 to 12 percent in 2014 and saving more than 100 lives.