It’s no secret that reforming the country’s health care system is an important issue in this year’s presidential election. According to a recent survey from the New England Journal of Medicine, one out of every five voters sees the 2010 health law as a top priority, but many are also still perplexed by it. That confusion has led about 15,000 physicians and medical students from around the country, working through the grassroots advocacy group Doctors for America, to take on the challenge of explaining the measure to patients and providers. 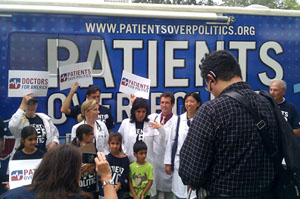 Doctors, part of the “Patients Over Politics” campaign, talk about their bus tour and goals (Photo by Doctors For America via Flickr).

The group, which first took shape in 2009, launched a bus tour in late August as part of its “Patients Over Politics” campaign. The tour visited points between the Republican National Convention in Tampa, Fla., and the Democratic National Convention in Charlotte, N.C. Along the way, its members spoke with more than 5,000 people.

Dr. Vivek Murthy, an attending physician at Brigham and Women’s Hospital in Boston and the co-founder of Doctors for America, views this kind of physician involvement as critical to addressing the ills of nation’s health care system.

A number of national medical professional organizations, such as the American Medical Association and the American Academy of Family Physicians, endorsed the health law and are now working to shape the implementation of specific provisions. Murthy says, though, that Doctors for America is unique in that it attempts to link its members on the ground with patients, community leaders and lawmakers to advance understanding of the overhaul and continue to build on it. 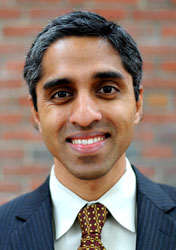 “We thought this is a moment where maybe we can make sure things are different – where we can bring physicians together to have more of an active voice,” Murthy said.

KHN’s Shefali S. Kulkarni spoke with Murthy, who also serves on the White House’s Advisory Group on Prevention, Health Promotion, and Integrative and Public Health Council and whose organization has become a non-profit project of the Center for American Progress. Edited excerpts follow.

Q: What motivated the bus tour?

A: The whole reason we began our campaign was to take this message to politicians in both parties and to communities. Our thesis going in was that people didn’t care if it was a Republican or a Democrat pushing for health care; ultimately what they cared about was how it could make their lives better.

People would tell us they were worried about how expensive insurance had become [or] that coverage wouldn’t be there for them when they got sick. We also heard a great sense of confusion — people had heard all kinds of myths and rumors that scared them [or] they just didn’t know what the [law’s] benefits were. There was a 23-year-old man at the University of South Florida who told us he was uninsured and fell sick last year. He told us, “Now I have a huge insurance bill and I’m in debt and I’m trying to finish school and after all that I still don’t have insurance.'” He didn’t know about the provision that could allow him to stay on his parents plan till he was 26. His eyes really lit up when we told him this.

Q: What’s the next step?

A: We’re organizing in states like Ohio, Massachusetts, Florida, and hopefully more states to get doctors [and] patients to sign “declarations of delivery”… to declare their support for the Affordable Care Act. We are going to deliver those declarations to elected leaders in those areas.

Q: And what about after the election?

A: The outcome of the election doesn’t change our mission. It isn’t about the party. It’s about building a sustainable system where everyone has access to quality health care. And that will require advocacy and hard work regardless of who wins the White House.

If President Barack Obama is reelected our goal is to make sure the health care law is implemented so that it will maximize benefits for patients. And we will go into communities and continue to explain how patients can take advantage of these benefits. We will also be pushing the president to go beyond the health law to make sure that we have a health care system that works. If [former Massachusetts] Gov. Mitt Romney is elected we will have to see what he intends to do with the law. He’s been running on a platform of repealing it, but there are already a lot of components of the health care law in place. We would work with the Romney administration to see that it is kept in place and perhaps build on it.

Q: How did Doctors for America start?

A: For years my colleagues and I noticed that people come into the medical profession with high ideals—wanting to help patients and do good for their community. But once they get into the practice of medicine they realize the system is broken. Many physicians have found themselves spending more time with paperwork than with patients, and feel like their soul is kind of being sucked dry. That is what’s driving so much of the burnout and the stress. It wasn’t just the fact that the health care system was broken — it’s that they were losing a sense of hope that it could actually get better — and that was the part that was most alarming to me. So we wanted to use the voices of doctors to move the health care system in a direction that ultimately places physicians and patients at the center of the discussion.

Q: If Doctors for America is a means to get physicians’ voices talking about changing the health system, what do doctors really want to happen?

A: If you talk to people on Capitol Hill, and you ask them, “What do doctors care about?” they’ll tell you two things: doctors care about medical malpractice and they care about reimbursement. What is frustrating to many doctors is that that didn’t really reflect the values of doctors who care about the quality of care we are delivering. So during the run up to health care reform we surveyed physicians on what their priorities were.

Physicians often told us that they thought it was a travesty that we had such a high uninsured rate — a rate that was only getting worse. A second big priority is that they wanted to improve and strengthen primary care. A lot of primary care docs and specialists see the system as increasingly untenable –both the quality of the work and in the reimbursement. That was leading to more burnout among primary care docs and it wasn’t an attractive option for medical school students. A third priority was ensuring we had a large enough workforce — enough physicians and nurses — to provide patients with adequate access to care.