DENVER — Amid clouds of choking tear gas, booming flash-bang grenades and other other “riot control agents,” volunteer medics plunged into street protests over the past weeks to help the injured — sometimes rushing to the front lines as soon as their hospital shifts ended.

Many are medical professionals who see parallels between the front lines of COVID-19, where they confront stark racial imbalances among those stricken by the coronavirus, and what they see as racialized police brutality.

So donning cloth masks to protect against the virus — plus helmets, makeshift shields and other gear to guard against rubber bullets, projectiles and tear gas — the volunteer medics organized themselves into a web of first responders to care for people on the streets. They showed up early, set up first-aid stations, established transportation networks and covered their arms, helmets and backpacks with crosses made of red duct tape, to signify that they were medics. Some stayed late into the night past curfews until every protester had left.

Iris Butler, a 21-year-old certified nursing assistant who works in a nursing home, decided to offer her skills after seeing a man injured by a rubber bullet on her first night at the Denver protests. She showed up as a medic every night thereafter. She didn’t see it as a choice.

“I am working full time and basically being at the protest after getting straight off of work,” said Butler, who is black. That’s tiring, she added, but so is being a black woman in America. 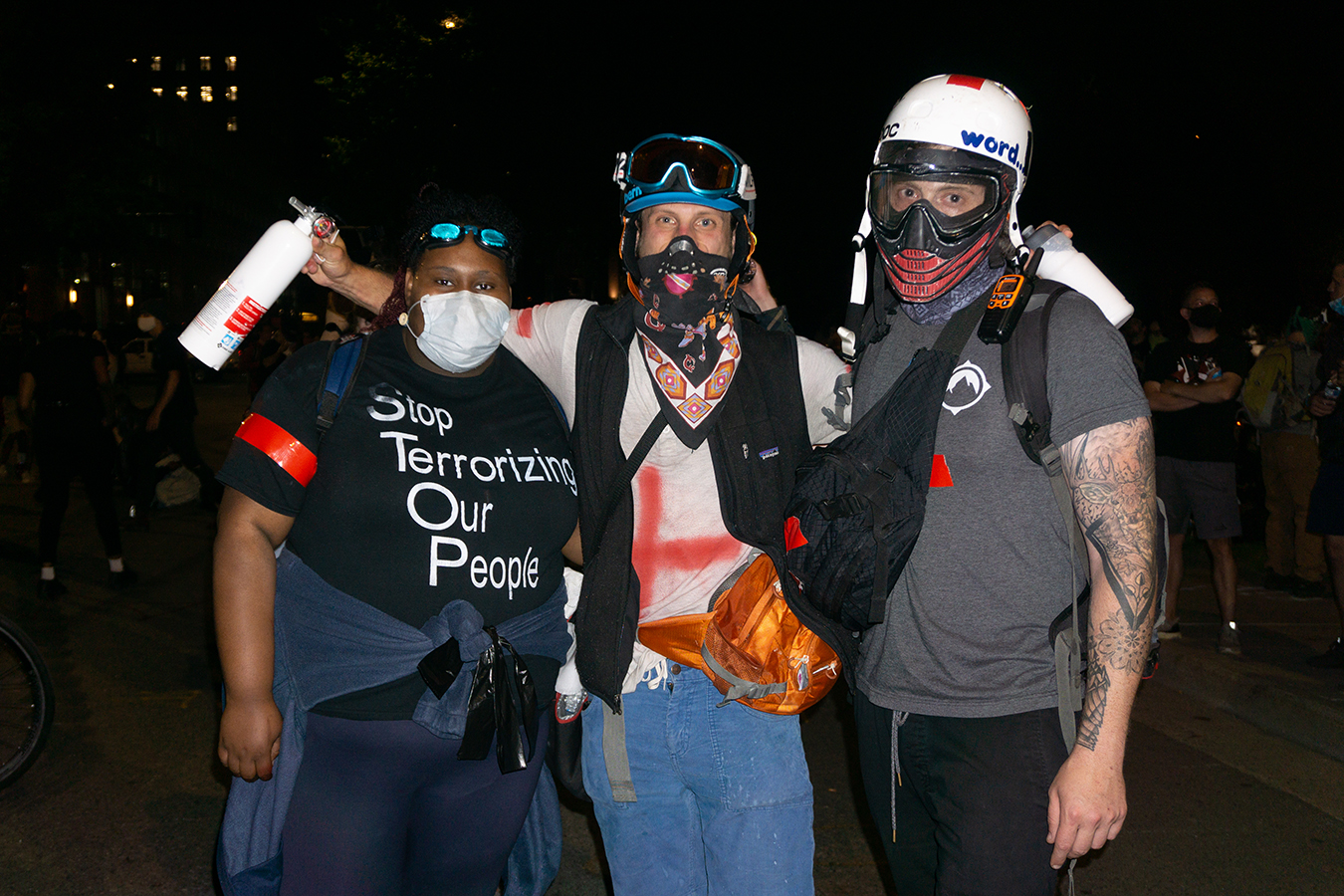 Iris Butler (left), a certified nursing assistant, stands with two other street medics she worked with during a protest on June 1, in Denver. She says she met the two, who declined to give their names, a few days earlier while tending to injured protesters.(LJ Dawson for KHN)

After going out as a medic on her own, she soon met other volunteers. Together they used text-message chains to organize their efforts. One night, she responded to a man who had been shot with a rubber bullet in the chest; she said his torso had turned blue and purple from the impact. She also provided aid after a shooting near the protest left someone in critical condition.

“It’s hard, but bills need to be paid and justice needs to be served,” she said.

The street medic movement traces its roots, in part, to the 1960s protests, as well as the American Indian Movement and the Black Panther Party. Denver Action Medic Network offers a 20-hour training course that prepares them to treat patients in conflicts with police and large crowds; a four-hour session is offered to medical professionals as “bridge” training.

Since the coronavirus pandemic began, the Denver Action Medic Network has added new training guidelines: Don’t go to protests if sick or in contact with those who are infected; wear a mask; give people lots of space and use hand sanitizer. Jordan Garcia, a 39-year-old medic for over 20 years who works with the network of veteran street medics, said they also warn medics about the increased risk of transmission due to protesters coughing from tear gas, and urge them to get tested for the virus after the protests.

The number of volunteer medics swelled after George Floyd’s May 25 killing in Minneapolis. In Denver alone, at least 40 people reached out to the Denver Action Medic Network for training.

On June 3, Dr. Rupa Marya, an associate professor of medicine at the University of California-San Francisco and the co-founder of the Do No Harm Coalition, which runs street medic training in the Bay Area, hosted a national webinar attended by over 3,000 medical professionals to provide the bridge training to be a street medic. In her online bio, Marya describes the coalition as “an organization of over 450 health workers committed to structural change” in addressing health problems.

“When we see suffering, that’s where we go,” Marya said. “And right now that suffering is happening on the streets.” 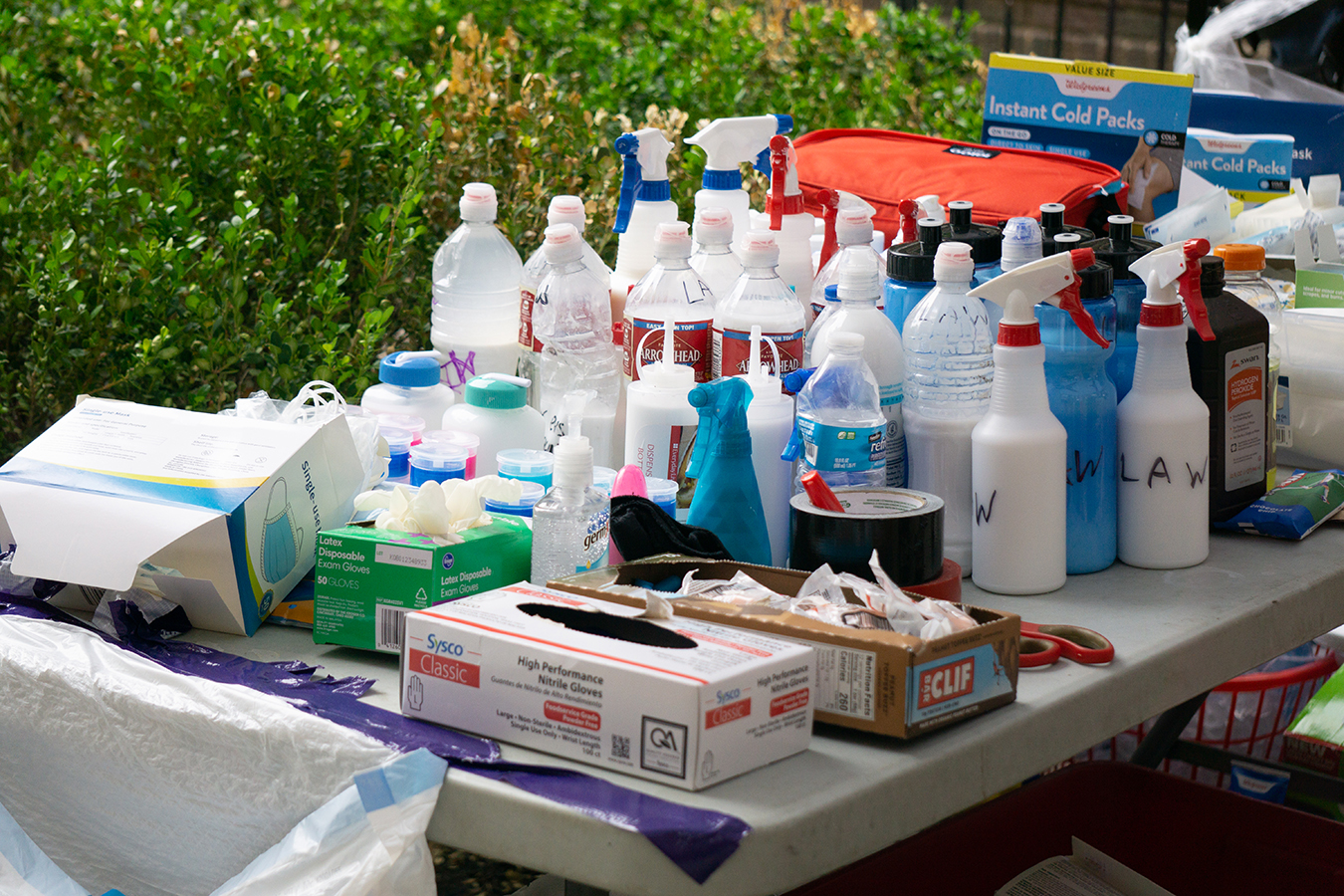 A table is filled with supplies for injured protesters at an apartment complex that became the central command for Denver’s street medics on June 1.(LJ Dawson for KHN)

In the recent Denver protests, street medics responded to major head, face and eye injuries among protesters from what are sometimes described as “kinetic impact projectiles” or “less-than-lethal” bullets shot at protesters, along with tear-gas and flash-bang stun grenade canisters that either hit them or exploded in their faces.

Garcia, who by day works for an immigrant rights nonprofit, said that these weapons are not designed to be shot directly at people.

“We’re seeing police use these less-lethal weapons in lethal ways, and that is pretty upsetting,” Garcia said about the recent protests.

Denver police Chief Paul Pazen promised to make changes, including banning chokeholds and requiring SWAT teams to turn on their body cameras. Last week, a federal judge also issued a temporary injunction to stop Denver police from using tear gas and other less-than-lethal weapons in response to a class action lawsuit, in which a medic stated he was shot multiple times by police with pepper balls while treating patients. (Last week in North Carolina police were recorded destroying medic stations.)

Denver street medic Kevin Connell, a 30-year-old emergency room nurse, said he was hit with pepper balls in the back of his medic vest — which was clearly marked by red crosses — while treating a patient. He showed up to the Denver protests every night he did not have to work, he said, wearing a Kevlar medic vest, protective goggles and a homemade gas mask fashioned from a water bottle. As a member of the Denver Action Medic Network, Connell also served at the Standing Rock protests in North Dakota in a dispute over the building of the Dakota Access Pipeline. 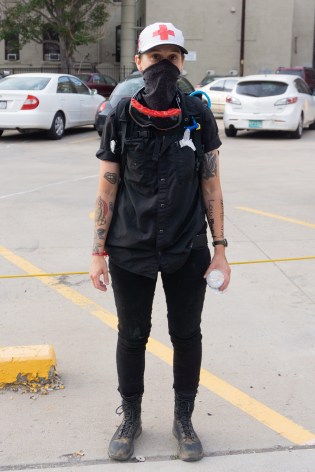 Aj Mossman prepares to go out as a street medic at a protest in Denver on June 1. Mossman, a Denver EMT studying for nursing school, was shocked to be tear-gassed and struck in the back of the leg with a flash grenade while treating a protester on May 30.(LJ Dawson for KHN)

“I mean, as bad as it sounds, it was only tear gas, pepper balls and rubber bullets that were being fired on us,” Connell said of his recent experience in Denver. “When I was at Standing Rock, they were using high-powered water hoses even when it was, like, freezing cold. … So I think the police here had a little bit more restraint.”

Still, first-time street medic Aj Mossman, a 31-year-old Denver emergency medical technician studying for nursing school, was shocked to be tear-gassed and struck in the back of the leg with a flash grenade while treating a protester on May 30. Mossman still has a large leg bruise.

The following night, Mossman, who uses the pronoun they, brought more protective gear, but said they are still having difficulty processing what felt like a war zone.

For Butler, serving as a medic with others from various walks of life was inspiring. “They’re also out there to protect black and brown bodies. And that’s amazing,” she said. “That’s just a beautiful sight.”