It used to be difficult for Edith Couturier, an 85-year-old resident of the District of Columbia, to explain to her adult children on the West Coast all the details of her medical appointments. But now she doesn’t go alone — she takes along a volunteer “medical note taker.”

“There are four ears listening to what the doctor says,” said Couturier.

That second set of ears belongs to Sharon Wolozin, who takes notes the old-fashioned way – with pen and paper – and then reads some of the main points aloud to confirm them with the doctor. If the patient forgets a question she told Wolozin she planned to ask, Wolozin will remind her. But she is not an advocate and has no medical training. 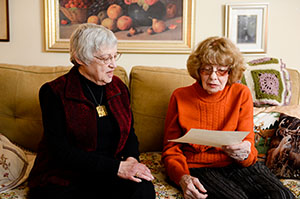 “We don’t get between the doctor and the patient,” said Wolozin. Her role is only to create an accurate record of what happened at the appointment that she gives to Couturier, who can then share it with her children or others.

Wolozin is a volunteer for the Northwest Neighbors Village in Washington, D.C., one of the more than 200 “villages” across the United States. These neighborhood membership organizations provide volunteers and other resources to help with everything from transportation and snow shoveling to hanging curtains and solving computer glitches.

But as many of the Northwest Neighbors’ 210 dues-paying members “age in place” – the village movement’s top goal — some need more than just a ride to the doctor, said executive director Marianna Blagburn. So the group is expanding its services this year with 16 newly trained “medical note takers” who will accompany members into the doctor’s office armed with questions prepared in advance and take notes (although they will leave during the physical exam, unless requested to stay). Then the notes are sent to the patient and anyone else the patient designates.

The Northwest Neighbors’ medical note-takers are modeled after the “Medpal” volunteer service introduced in 2009 at Avenidas Village, California’s first village group, which now has 375 members in the Palo Alto area.

“Members would come to us and say, ‘I’ve got a doctor’s appointment, I am really worried, and I need another pair of ears,'” says program director Vickie Epstein. Ashby Village, in Berkeley, Calif., began offering Medpals to its 275 members in 2011, and Capitol Hill Village in Washington, D.C., has been providing note takers since 2007 to its members, which now total 370. Newton At Home, the village in Newton, Mass., also offers its 180 members note takers.

The move comes as village organizations are seeking new ways to help members with their health needs. The Newton village also offers discharge planning services for members who have been in the hospital and will even make sure the refrigerator is well stocked when members return home.

Tips For A Successful Doctor’s Visit

The average doctor’s appointment is about 20 minutes, according to the most recently available statistics from the National Center for Health Statistics at the Centers for Disease Control and Prevention. Here’s what medical note takers at Northwest Neighbors Village recommend to make the most of the time:

No matter what their age, patients can have difficulty making sense of complicated diagnoses and medical terms, said Deb Rubenstein, care management director at Iona Senior Services, a nonprofit community service center in Washington, D.C. who helped design the training program with a grant from the city. An elderly patient may have arthritis that makes writing painful, have difficulty hearing or hesitate to interrupt the doctor with a question, she said. And as patients grower older, their medical needs become more complex and demand greater understanding.

Although these note-taker programs are limited to villages members, it’s important for all patients to be engaged in their medical care, said Lynn Quincy, senior policy analyst at Consumers Union.

“The evidence is overwhelming that when patients are active participants – taking notes and asking questions — they interact with their doctors better and get better outcomes,” she said.  “But on average patients don’t score very well on health literacy and  it can be hard for them to understand everything the doctor said and the instructions they have to follow.”

The ability to be engaged is further undermined when there is any kind of cognitive impairment, she said.  It could be temporary, due to illness, lack of sleep, or major stress.  When that happens, bringing another person with you to the appointment is a great idea, she said.

Barbara Dresner, 88, also brought Wolozin to a recent doctor’s appointment, even though she has four adult children, including a son who lives with her and two others who live in Maryland.

“I feel if I don’t have to bother them, I’m still being independent,” said Dresner.  And even though her doctor provided a written summary of the appointment, she said Wolozin’s notes were easier to understand.

But in the long run, note takers may not solve communication problems between elderly patients and their doctors, said Dr. Peter DeGolia, a geriatrician and professor of family medicine at University Hospitals Case Medical Center in Cleveland. The concept isn’t practical since most patients don’t have access to a volunteer note taker.  And even when a patient is assertive and asks a question, the physician still has to provide answers – written or oral – that the patient can understand. Otherwise, “it’s like two ships passing in the dark,” he said.

The Couturier family has been grateful for the service. Last year, one of Couturier’s doctors canceled leg surgery designed to improve her circulation and recommended a new medication instead. But when her children reviewed Wolozin’s notes, they confirmed that she had taken the drug, and it didn’t work. The surgery was rescheduled, and she’s doing better.

The medical note takers are “tremendously important,” said Couturier’s son, Andy, of Santa Cruz, Calif. “If the doctor comes in and says a lot of things really quickly, the crucial link in the system is lost if the patient doesn’t understand the diagnosis or what medication to take.”

Lend Us Your Ears: Note Takers Help The Elderly At The Doctor