Felicita Soto remembers finding blood in the oddest places. On her pillow in the morning. In her sandwich after she took a bite. Once, a coworker whispered with disgust: “Felicita, you’re bleeding.”

Soto felt mortified. She’d recently kicked a smoking habit she’d had since age 12. But it was too late for her teeth. Eventually, she found herself in a dentist’s chair, getting 23 extracted at once.

Now 56 and living in Orlando, Florida, Soto describes that experience as “the most torturous thing I ever went through.”

“Having babies wasn’t that bad next to that torture,” she said.

Soto is one of a handful of former smokers sharing stories as part of the Centers for Disease Control and Prevention’s national Tips from Former Smokers campaign. Personal stories like Soto’s — emotional and sometimes jarring — run on television, radio, online and in print around the country. And they are intended to resonate with the nation’s major ethnic groups.

When it comes to Latinos, the campaign is particularly important in states like California, where 38 percent of residents are Hispanic and efforts to reach them have, according to some experts, fallen short.

Jesse Nodora, assistant professor at the medical school at the University of California, San Diego, said that until now much of the outreach to Spanish-speakers is based on simple translation instead of culturally appropriate messages. He worries the Tips campaign has the same flaw.

“How do you reach them?” Nodora said. “It isn’t going to be through generic health promotion.”

“It isn’t the doctor telling you,” she said. “It is the smoker who has lost his ability to speak. Who has lost limbs from diabetes and bad circulation. Those who can’t walk up the stairs.”

That said, Noltenius says she would like to see the CDC place more ads in Latino media and design more ads featuring Latino former smokers.

“To me, that is one of their weaknesses,” she said. “The [tobacco] industry is targeting us constantly.”

Overall, Latinos have lower smoking rates than many other populations — about 11 percent of Hispanics smoke nationally, compared to about 18 percent of whites and blacks.

But taking the Latino population as a whole masks significant variation, according to Noltenius: Puerto Rican women, like Soto, have very high smoking rates on the U.S. mainland, she said; Mexican-American women have very low rates. Latino men generally smoke at higher rates than Latina women.

“You’re dealing with one-size-does-not-fit-all,” she said.

In general, smoking rates are down significantly in recent years. But tobacco addiction remains an intractable issue in many communities: Smoking still kills 480,000 Americans every year. Then there are the side effects that afflict the living — 16 million Americans suffer from smoking-related diseases ranging from cancer to heart disease to collapsed lungs to gum disease.

“A lot of people think that the problem of tobacco is solved,” said Diane Beistle, chief of the health communications branch of the CDC’s Office on Smoking and Health.

She said the campaign especially targets ads to low-income populations in parts of the country where smoking rates are high. The agency has worked to ensure that the ads resonate with minority groups, she said, especially those with high rates of smoking: American Indian and Alaskan natives, members of the military, people with mental health conditions, and gay, lesbian, bisexual and transgendered people, among others.

“If the Tips campaign only featured white males, it wouldn’t be very effective,” Beistle said. “We’ve done a very deliberate job of making sure ads are inclusive.” 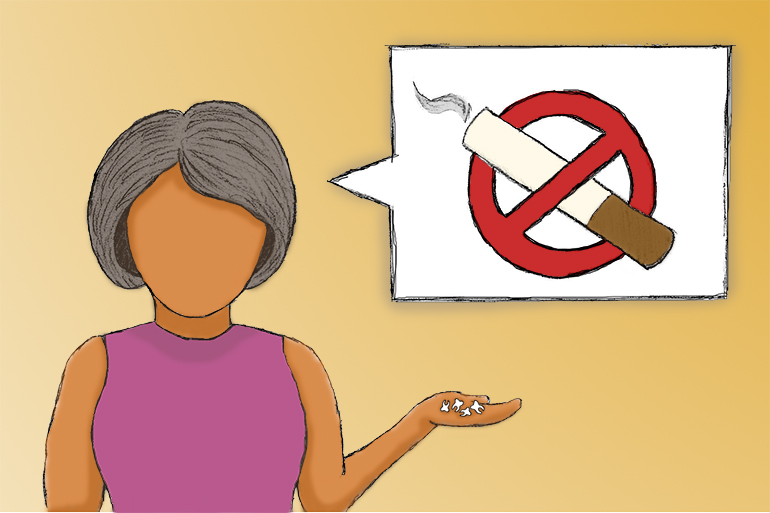 Recent data support the campaign’s effectiveness, she said: A study released in March showed that nearly two million people across the country attempted to quit as a result of the 2014 campaign, and 104,000 managed to go without smoking for at least six months.

Although Latinos have lower rates of smoking-related illness than other groups, those who do get sick often wait to seek medical attention until their diseases are more severe, said UC-San Diego’s Nodora.

Nodora said he worked with the Tips campaign early on and spent a decade overseeing tobacco education programs for the Arizona Department of Health. While education is important, he says, the most effective way to reduce smoking is to increase cigarette taxes and change policies to make it harder to smoke.

While California’s anti-smoking efforts are widely lauded, Nodora notes that the state still has one of the lowest cigarette taxes in the country. A package of anti-smoking laws was recently signed by Governor Jerry Brown. One bill raises the minimum smoking age from 18 to 21. Another regulates electronic cigarettes like tobacco products.

It isn’t the doctor telling you. It is the smoker who has lost his ability to speak.

Dr. Michael Fiore, director of the Center for Tobacco Research and Intervention at the University of Wisconsin School of Medicine and Public Health, says that data show the Tips campaign has proven “highly effective” over the years. He hears from his own patients about how the campaign has touched them.

“Smokers so often feel alone with their addiction,” he said. “They feel they are failures, personally. They feel they have failed their families, themselves, their children. To see others who have struggled and overcome is a very powerful motivator.”

Fiore emphasizes that education is an important aspect of the multi-pronged approach needed to effectively fight smoking — half the people who become addicted to tobacco will die from smoking-related illnesses, he said. On average, he said, smokers die 10 to 15 years earlier than non-smokers.

Rico Foz, from Belmont, California, is one of the faces of this year’s Tips campaign. Foz, who is Filipino, smoked two packs a day for years before being diagnosed with esophageal cancer in 2010. He lost his job — and his insurance — before he had surgery. No longer able to pay his mortgage, he lost his home and his family had to move. Recovery took two years.

Still, Foz considers himself lucky to have a second chance at life, and to be able to share his story with others. He knows from experience that quitting is very, very hard — he had tried and failed several times before his cancer diagnosis. But, he emphasizes, it can be done.