What is the best hospital in Washington, D.C.? It’s not as easy to figure out as you might think.

Over the past two decades, a cottage industry of nonprofits and companies has sprung up that offers grades and rankings on the quality of hospitals. Because of the proliferation in ratings, two-thirds of the hospitals in the Washington area have won at least one distinction from a major rating group or company. 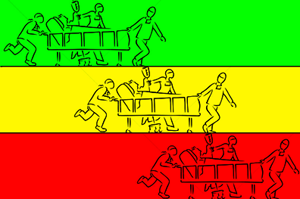 And the number of rankings continues to grow. Last year both the Leapfrog Group, a nonprofit funded by employers, and Consumer Reports began rating the safety of hospitals for the first time. Other companies, such as Healthgrades and US News & World Report, have expanded their lists to cover more procedures or localities. In 2011, for instance, US News began designating best hospitals in regions of the country as well as identifying national stars. This summer, US News singled out 738 hospitals for either national or regional excellence.

Many of the ratings are grounded in a common source: Medicare’s Hospital Compare website, which publishes 100 different bits of data about hospitals, including death rates and the results of patient satisfaction surveys. But beyond that, the hospital graders come up with their own unique formulas for creating their rankings. For example, Consumer Reports counts the number of patients who are readmitted, while Leapfrog does not. U.S. News is alone in surveying doctors about which places they think are the best for specific elective specialties, such as cancer or urology.

As a result, the raters often come to drastically different conclusions even when they purport to rate the same thing. Leapfrog gave an “A” for patient safety to Inova’s hospitals in Alexandria and Fair Oaks. But those two hospitals were absent from the list of 379 safest hospitals calculated by Healthgrades. Consumer Reports gave United Medical Center in Southeast the highest safety score in Washington, but Leapfrog gave it a grade of “D.” U.S. News ranked MedStar Washington Hospital Center as the 29th best hospital in the nation for cardiovascular care and heart surgery. But the hospital didn’t make the list of the 50 top cardiovascular hospitals published by Truven Health Analytics, a data and consulting company.

What’s more, as groups refine their methods of assessment, hospitals can rise and fall in their rankings from year to year. The Commonwealth Fund, a health care philanthropy in New York, found in a study that only 46 percent of hospitals ranked as top performers by Thomson Reuters in 2008 were also winners in 2007.

As a consumer, what are you supposed to do with all of this conflicting and confusing information? “We’re still trying to figure out what is high quality health care,” says Dr. Ashish K. Jha, a professor at the Harvard School of Public Health. “If you really want to use these ratings, then just looking at the top line may not be enough. You need to dig further to find the rating that reflects your values.”

Despite all the contradictions, Jha says ratings have been helpful in giving consumers something to rely on beyond the opinions of their friends or doctors. “There is a reason why some hospitals have reputations for being good—because they are good hospitals. But not all of them,” he says. “When these ratings use data, we do see some surprises. At the end of the day, I trust the data more than reputation.”

Here’s another surprise for consumers: Healthgrades, U.S. News, and Leapfrog charge hefty licensing fees to hospitals that want to advertise their awards. The fees can range from $12,500 to the mid-six figures. Healthgrades, for example, told NYU Langone Medical Center in Manhattan it would cost $145,000 to use its citations, according to Dr. Andrew Brotman, NYU’s chief clinical officer.

MedStar Health, which runs three hospitals in the District and seven in Maryland, pays $70,000 to US News to use its name and awards when promoting its hospitals, says Jean Hitchcock, MedStar’s vice president for public relations and marketing. With such an economic structure, it’s no surprise that the raters keep finding more ways to rank hospitals.

A number of the raters, including Healthgrades and Truven, offer consulting services to hospitals seeking better performance. “Some of the rating agencies have conflicts of interest and the consumer probably doesn’t know about that,” says John Sackett, the president of Shady Grove Adventist Hospital in Rockville. He adds that when he ran a hospital in Colorado, Healthgrades tried to charge $30,000 to use its ratings in advertising and offered consulting services that would have cost more than $100,000.

But the raters aren’t the only ones trying to benefit from these rankings—hospitals see them as a valuable marketing tool. Truven, the only major evaluator to include efficiency and profitability in its formula, created its top 100 list for hospital executives and boards to compare themselves and use toward improving their performance. Those not on the list can purchase the results.

Jean Chenoweth, a Truven vice president, says that hospitals began to advertise its rankings in the late 1990s. At one point, she recalls, “I had to call up a few hospitals to tell them ‘Your advertising is not appropriate. You can’t say every hospital in your system is a 100 Top Hospital just because one hospital made the list.'” While Truven wasn’t licensing its list for advertising, Chenoweth says, “We learned that we had to set some rules.”

Even though hospitals are spending tens of thousands of dollars to tout rankings, it’s not clear how much impact they have on consumers—a Pew Research Center survey released earlier this year found that only 14 percent of Internet users consulted online rankings or reviews of hospitals and medical facilities.

District resident Florence Harvey, 71, was one of those 14 percent. When Harvey moved here last fall, she picked a health plan and doctor affiliated with Washington Hospital Center after reviewing all the local hospitals rankings on U.S. News’ website. “I Googled best hospitals in DC,” she says. “Across the board, Washington Hospital Center seemed to be a really great place.”

But for others, ratings play no role in choosing a hospital. “Suburban Hospital has conducted many surveys and focus groups over the years, and these strongly suggest that when choosing a hospital, patients rely most heavily on the opinion of their personal physician,” says Ronna Borenstein-Levy, a spokeswoman for the Bethesda hospital. And of course patients needing emergency treatments aren’t in a position to comparison shop.

Still, rating groups say hospital boards and executives pay attention to the ratings, which keeps the pressure on them to improve quality. “If a rating in some way affects their reputation and jeopardizes their portion of revenue stream, they’re going to be responsive,” says Dr. John Santa, who directs Consumer Reports’ health ratings.

Avery Comarow, health rankings editor for U.S. News, believes consumers benefit from different vantages. “Just as with cars, no single set of ratings or evaluations can adequately define hospital quality,” he wrote on U.S. News’ web site earlier this year. “A hospital that does a fine job delivering babies or performing routine bypass surgery may not be where to look for delicate lifesaving cancer surgery or state-of-the-art care for cystic fibrosis.”

Dr. David Mayer, MedStar’s vice president for quality and safety, says he applauds organizations that are trying to make hospital data meaningful for the public. But he says he is concerned that too many hospitals view ratings on metrics like patient safety as ways to compete with each other for patients. “When you look at the aviation and nuclear industries, they never compete on safety,” Mayer says. “They share. When an airline learns something, the FAA puts it out immediately.”

That’s not the prevailing attitude around Washington. On its home page, Sibley Memorial Hospital proudly declares, in bold and underlined font, “Sibley is the only DC hospital honored with an ‘A’ Hospital Safety Score by The Leapfrog Group.”

Of course, given the ever shifting ratings, next year it may be a different hospital with that distinction.

This story was updated to correct how much MedStar pays US News to use its name and awards.