The federal online marketplace selling newly available health insurance in 36 states continued to frustrate consumers Wednesday with delays and software failures, although some reported success in signing up. 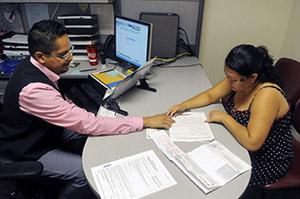 “I get on the page. It loads. Then something doesn’t happen,” said Ben Robertson, a New Hampshire actor and consultant who chronicled his 30-plus failed enrollment attempts on Twitter (@BenHRobertson), complete with screenshots.

But he was making progress. Earlier he got a confirmation email but was unable to complete registration. Wednesday afternoon he succeeded in registering but couldn’t log on.

But Whitaker expected the site “to start clogging up” later in the morning. “I guess that’s the busiest time of the day,” she said. “People get lunch breaks and they have access, and that’s when they get on.”

“Volume at HealthCare.gov continues to be high, with 4.7 million unique visits in the first 24 hours,” said Joanne Peters, spokeswoman for the Department of Health and Human Services. “We expect to see similar volume [on Wednesday] as yesterday. While this overwhelming interest is continuing to cause wait times, there will be continuing improvements in the coming hours and days.”

HHS operates the marketplace created by the Affordable Care Act for the more than 30 states that declined to build their own sites or that partnered with the federal government. State-operated sites in Maryland, Minnesota, Connecticut, Rhode Island, California and elsewhere appeared to be working.

HHS reminds consumers lacking insurance that they have until Dec. 15 to sign up to get coverage starting Jan. 1, and until March 31 before the enrollment period ends.

The federal shutdown wasn’t helping the process. Patsy Dowling, executive director of Mountain Projects, a North Carolina nonprofit enrolling consumers, said she can’t get questions answered from the government because her contact at HHS was furloughed.

“It’s kind of amusing,” she said. “The biggest change since Medicare and the government shuts down.”

Meanwhile, the Kansas Association for the Medically Underserved, which won a $524,000 federal “navigator” grant to help consumers use the federal exchange, has not been able to access Healthcare.gov Tuesday or Wednesday. “We have not been able to get to see any insurance plans in Kansas,” said spokeswoman Katrina McGivern. She said in the training last month officials advised the navigators to not even try to get people enrolled the first week for fear the website would be flooded.

“I’ve had no access at all today or yesterday,” said Fabienne Pierre, navigator for the Sickle Cell Foundation of Palm Beach County and the Treasure Coast. For now she is telling people who call to set up appointments in the next few weeks.

The University of South Florida was enrolling applicants on paper even though that requires more than one meeting with each consumer, said Jodi Ray, director of the signup project.

“We have been trying to get online virtually nonstop since 5 a.m. Tuesday and have not been able to,” John Foley, who supervises navigators at the Legal Aid Society of Palm Beach County.

At the Southern United Neighborhoods’ office in the Dallas area, “some people got up to entering their income and then [the site] freezes it,” director Marie Hurt said Wednesday. “Most of the time you can’t even log in. Nobody has been able to see their plans.”

At Oak Hill Missionary Baptist Church in Hernando, Miss., the software seemed to be working a little better Wednesday, “but we’re not able to get anything completed,” said Minnie Wilkinson.

A continuing problem was the “security question” for users to validate their identity, which HHS officials said was caused by volume, not software flaws.

In New Hampshire, the site cued Robertson to call an 800 number after he registered but was unable to log in.

“I got through to somebody really quickly,” he said. “She told me that a lot of people are not able to log in to the site just because of traffic. What she recommended was waiting for a couple hours.”

By Phil Galewitz and Jenny Gold and Jay Hancock and Ankita Rao and Marissa Evans October 2, 2013