WILLIAMSON, W.Va. – It was a frosty December afternoon in downtown Williamson, with hot tomato and beef soup on the menu at Jacobs Well.

Ronald Washington warmed up at a long wooden table. The 58-year-old security guard, wearing a striped winter hat and brown jacket, came during his lunch break for one of the free meals that the faith-based mission provides. 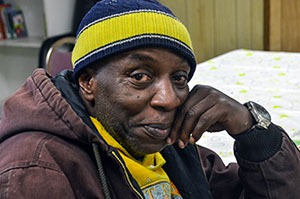 Ronald Washington, a Williamson resident, works as a security guard and signed up for Medicaid in December. Pictured at Jacobs Well, a faith-based soup kitchen/mission in downtown Williamson (Photo by Ankita Rao/KHN).

He has to stretch his salary of about $950 a month, and worries that with his high blood pressure, thyroid and eye problems, he won’t be able to afford the $150 cost of medicine. Washington was hopeful that the state’s decision to expand Medicaid would help him get covered.

Under the Affordable Care Act, states have the option to increase eligibility for Medicaid, a state-federal insurance program for low-income people. Now an individual who earns up to 138 percent of the federal poverty line, or $16,105, can qualify. Many Republican governors refused to expand the program, but West Virginia Gov. Earl Ray Tomblin, a Democrat, persuaded a divided legislature to go along.

More than 75,000 people have enrolled so far, exceeding the state’s projection of 63,000. Some advocates for the poor are thrilled, but they caution that insurance coverage alone won’t overcome the deeply rooted health problems of many poor West Virginians who live in isolation and poverty.

“If your premise is that Medicaid expansion will make a community healthier, it’s wrong. You have to look at the culture,” said Donald Reed, a program coordinator for McDowell County’s West Virginia University Extension, which brings some of the university’s resources to the area.

McDowell and adjacent Mingo County, where Washington lives, are among the poorest in the state and share problems common to other impoverished areas of the U.S.

In Mingo – where Williamson is located – 17 percent of the population is uninsured, compared to 11 percent nationally. Almost one-third of the adult population is obese, and the rate of physical inactivity is almost double the rest of the country, according to the Robert Wood Johnson Foundation.

McDowell ranks even lower when it comes to health. It has the highest rate of prescription drug abuse in the country; a 33 percent obesity rate; and early death from drugs and other illness has become increasingly common. Both counties were among the one percent of U.S. counties with the shortest life expectancies. 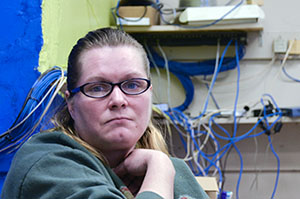 For anything other than very basic health care, people have to travel, sometimes far. “They can’t even fix a broken bone here,” said Mary Anne Dudley, a McDowell resident.

Dudley, 30, who has Medicaid, said she has driven to Bluefield, W.Va., about an hour and a half away from her hometown of Coalwood, to see a doctor for an asthma attack and during her first pregnancy.

There are two federally funded health centers in McDowell County, mostly staffed by nurses and physicians’ assistants – and one community hospital. But specialized care and mental health care are not easily available, Reed said. Mingo County also has one hospital and will soon have a new federally funded health center, but patients often travel across the border to Kentucky to receive care.

Reed said the isolation of McDowell’s communities is one of the reasons government insurance cards aren’t all that’s needed. “Access,” he said, “does no good unless you can get somewhere.”

Still, Medicaid is an essential part of improving care, said Dr. James Becker, who helped the state to expand Medicaid and is now a professor at the Marshall University Joan C. Edwards School of Medicine in Huntington. “It will do a great deal to make sure they have preventive care,” he said.

To reach those likely eligible for Medicaid, the state health department sent letters to 118,000 people who receive food stamps from the Supplemental Nutrition Assistance Program. This brought in the majority of applications, while local health departments, in-person insurance assisters and the state’s online exchange, which is a partnership with the federal Department of Health and Human Services, accounted for the rest.

The state is also expanding insurance coverage by helping people who don’t qualify for Medicaid to seek private insurance with a federal subsidy through the website. 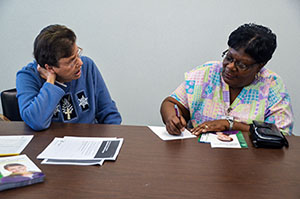 Sister Janet Peterworth travels through southern West Virginia to help people sign up for health insurance. She works with the Healthy Kids and Families coalition (Photo by Ankita Rao/KHN).

“West Virginia has, and is, making a big, big difference,” said Sister Janet Peterworth, who works with the West Virginia Healthy Kids and Families Coalition and is funded by a state government grant to help people enroll in insurance plans.

She has been driving her white Ford Escape across five counties since October to assist consumers. She picks places like busy libraries and pharmacies to reach the most people.

In early December, Peterworth parked her briefcase and sign-up forms on a table at the Williamson Housing Authority, which helps low-income individuals and families find affordable housing. An uninsured woman, Pat Blackman, who lives in a nearby subsidized housing community, showed up in the first few minutes.

The first step was to total Blackman’s household income. Her disabled husband receives a monthly check from the state. Blackman provides home help to the elderly. Together they make about $22,000 a year – just a few dollars too much for Medicaid. The limit for a household of two is $21,707.

Blackman, 60, said maintaining her health without insurance has been tough. Her prescriptions for medication for high blood pressure and stomach acidity would cost over $300 a month if she filled them regularly, which she couldn’t afford to do.

“Some doctors and pharmacists will work with you,” she said, “but sometimes you get turned away.”

Peterworth gave Blackman instructions on checking options through the federal website and assured her she would qualify for a subsidy and find an affordable plan.

For Washington, the success of the new program is crucial to staying healthy.

As he finished his soup and vanilla cookies at Jacobs Well, Washington said Medicaid coverage would offer him relief in the daily struggle of working to pay rent, gas and finding time to see his son, who lives in a different city.

“Most of this health stuff is caused by stress,” he said. With insurance, Washington saw a way out. “It’s about peace of mind.”

A month later, he was approved for Medicaid.

Medicaid Expansion Only A First Step To Better Health In Troubled W.Va. Communities