Nothing Jenn and Jason learned in parenting class prepared them for the challenges they’ve faced raising a child prone to violent outbursts.

The couple are parents to two siblings. They first fostered the children as toddlers and later adopted them. (KHN has agreed not to use the children’s names or the couple’s last names because of the sensitive nature of the family’s story.)

In some ways, the family seems like many others. Jenn and Jason’s 12-year-old daughter is into pop star Taylor Swift and loves playing outside with her older brother. He’s 15, and his hobbies include running track and drawing pictures of superheroes. The family lives on a quiet street in central Illinois, with three cats and a rescued pit bull named Sailor.

Jenn described their teenage son as a “kind, funny and smart kid,” most of the time.

But starting when he was around 3 or 4 years old, even the smallest things — like being told to put on his swimsuit when he wanted to go to the pool — could set off an hours-long rage.

“In his room, his dresser would be pushed across the other side of the room,” Jason said. “His bed would be flipped up on the side. So, I mean, very violent. We’ve always said it was kind of like a light switch: It clicked on and clicked off.”

Jenn and Jason said their son’s behavior has gotten more dangerous as he has gotten older. Today he’s 6 feet tall — bigger than both of his parents.

Jenn said most of the time her son directs his initial anger and aggression toward her. But when the 15-year-old has threatened to hit her, and Jason has intervened, the teen has hit his father or thrown things at him.

“The way he will look at me is just evil,” Jenn said. “He has threatened to slap me in the face. He’s called me all sorts of horrible names. After an incident like that, it’s hard to go to sleep, thinking, ‘Is he going to come in and attack us while we’re sleeping?'” 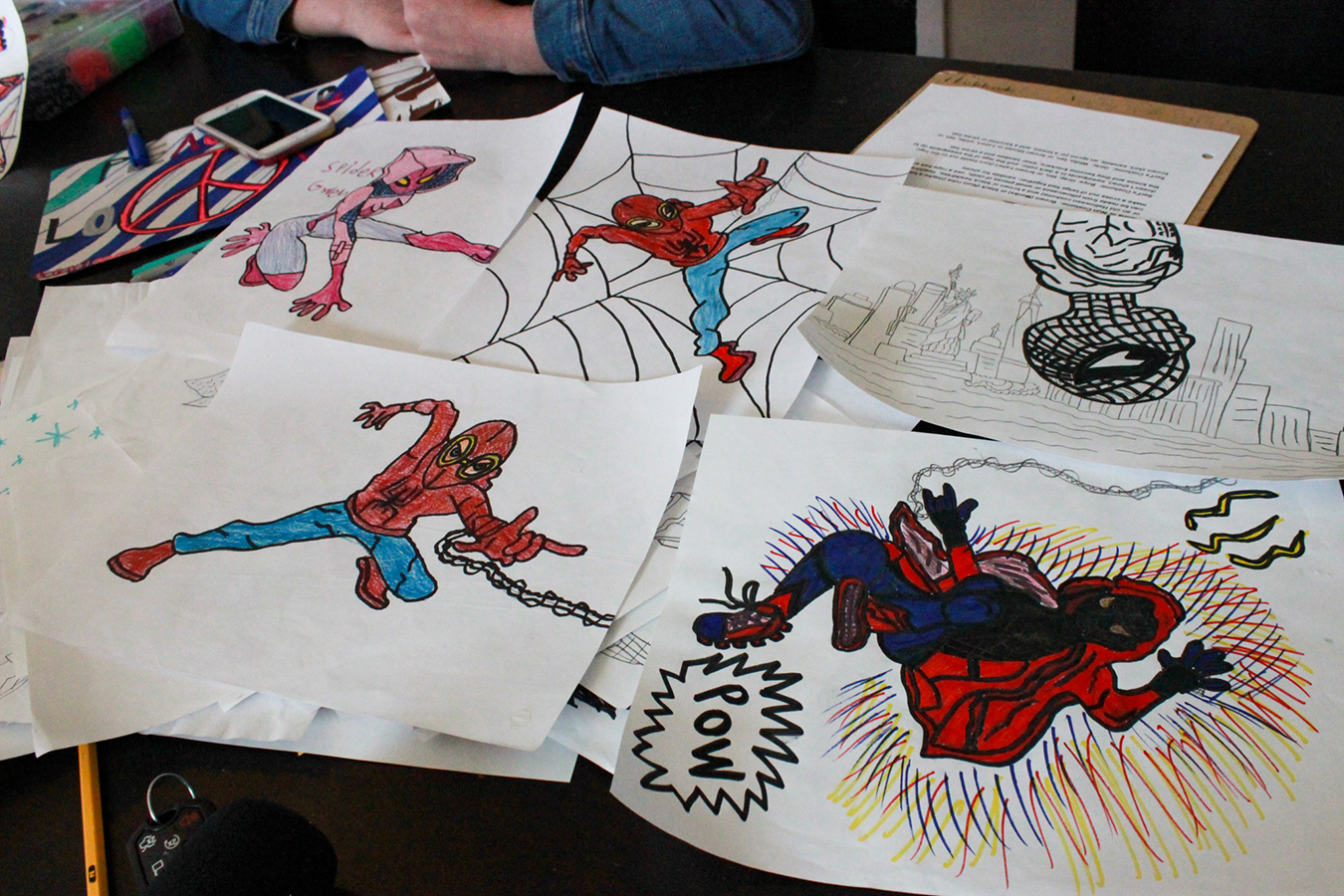 Drawings made by Jenn and Jason’s 15-year-old son lie on the family’s dining room table in their home in central Illinois. Though his angry outbursts reveal a violent side, his parents say that most of the time he is “kind, funny and smart” — a teen who enjoys drawing pictures of superheroes.(Christine Herman/Illinois Public Media)

People who are victims of domestic violence are advised to seek help. But when the abuse comes from your own child, some parents have said there is a lack of support, understanding and effective interventions to keep the family safe.

While research is limited, a 2017 review of the literature found child-on-parent violence is likely a major problem that’s underreported.

Jenn said she’s concerned about everyone’s safety and worries about her 12-year-old daughter being exposed to recurrent violence in their home.

The stress has taken a significant mental and emotional toll on Jenn. She sees a therapist to cope with the violence at home and to deal with her anxiety.

“There are days when it’s hard to breathe,” Jenn said. “You just feel it in your chest — like, I need a breath of air, I’m drowning. We say to each other all the time, ‘This is insanity. How can we live like this? This is out of control.'”

Blamed And Shamed Into Silence

It’s hard to know exactly how common Jenn and Jason’s experience is, since research is sparse. In one nationally representative survey in the mid-1970s of roughly 600 U.S. families, about 1 in 11 reported at least one incident of an adolescent child acting violently toward a parent in the previous year. In about a third of those cases, the violence was severe — ranging from punching, kicking or biting to the use of a knife or gun.

Other more recent estimates of the prevalence of child-on-parent violence range from 5% to 22% of families, which means several million U.S. families could be affected.

A 2008 study by the U.S. Justice Department found that while most domestic assault offenders are adults, about 1 in 12 who come to the attention of law enforcement are minors. In half of those cases, the victim was a parent, most often the mother.

While most children who are abused or witness domestic violence do not go on to become violent themselves, and while most people with mental illness are not violent, those life experiences have been identified as risk factors for children who abuse their parents.

Lily Anderson is a clinical social worker in the Seattle area who has worked with hundreds of families dealing with a violent child. Along with her colleague Gregory Routt, she developed a family violence intervention program for the juvenile court in King County, Wash., called Step-Up.

Anderson said, in her experience, many parents feel ashamed about their situation.

Anderson said many of the incidents take place at home, where the assaults are hidden from the public eye. That contributes to the lack of public awareness about the issue and makes it even harder for affected parents to find support.

“The whole issue becomes perceived as being the parent’s problem and the parent is to blame for the youth’s behavior,” Anderson said. “I think the main issue is that we need to talk about this. We need to talk — be willing to put it out there and make it an important issue and bring resources together for it.”

Jenn said that she has talked to her son’s therapists about why he has such trouble regulating his emotions, and they’ve told her it could be linked to the severe trauma he experienced as a baby and toddler.

When the couple began fostering the siblings in late 2007, the boy was 3 and his sister younger than 1. They had been removed from the home of their birth parents, where police were regularly called for drug and domestic violence issues. Jenn said her son remembers being beaten by men in his home and watching as his biological mom cut herself.

Jenn and Jason started their son in therapy at a young age, and he has been diagnosed with reactive attachment disorder, PTSD, attention deficit hyperactivity disorder and autism. 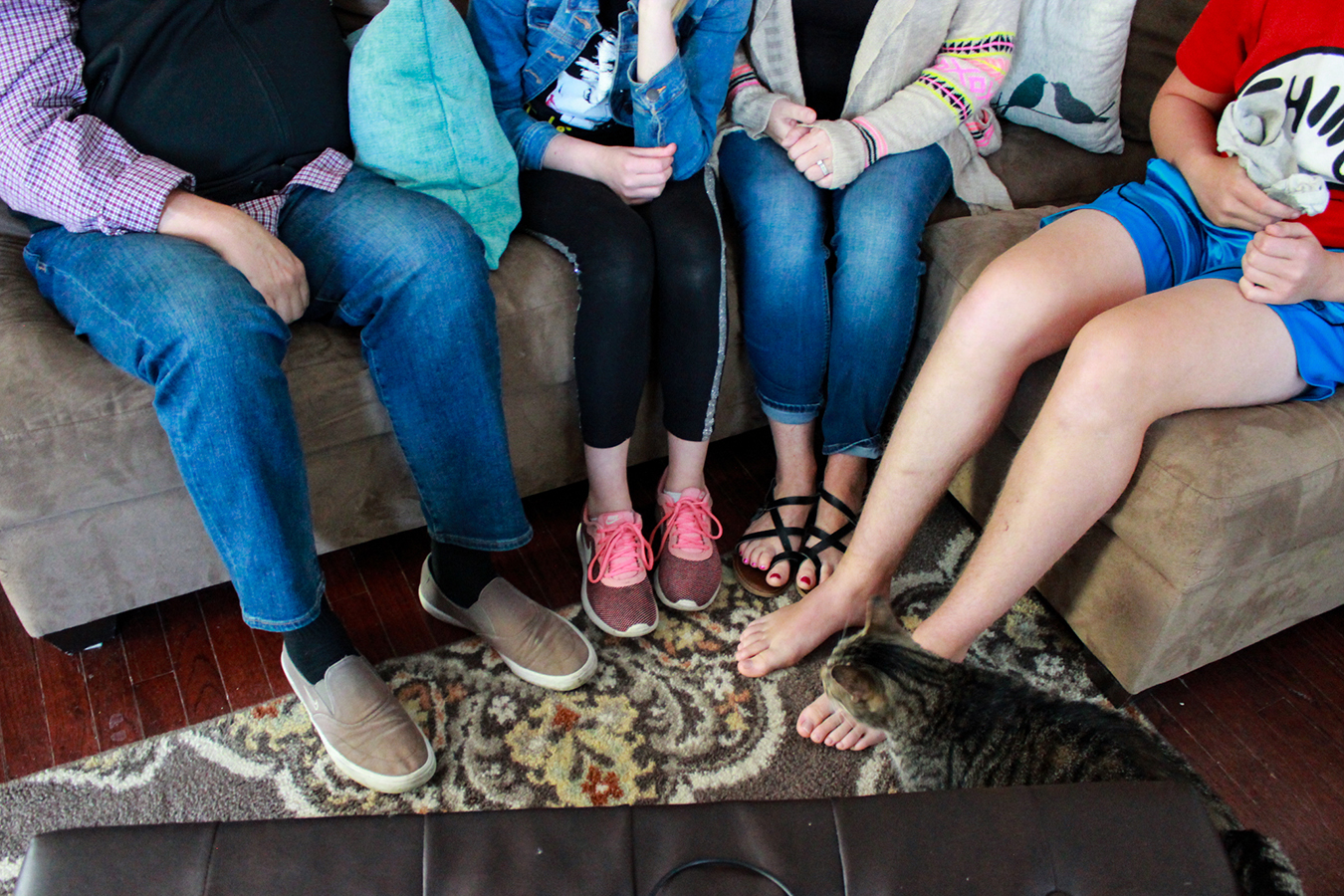 Jenn, Jason and their kids together at home last spring. Before they were adopted, the kids experienced or witnessed significant abuse in their birth family, Jenn says. That severe trauma, according to therapists, is likely a source of their son’s difficulty in regulating his emotions.(Christine Herman/Illinois Public Media)

The teen has attended art therapy and equine therapy regularly for years. He also participated in a mentorship program and attended a school designed for children with behavioral health needs. Jenn and Jason participated in family therapy sessions with their son, where they learned coping skills and practiced de-escalating situations at home.

The teen was also prescribed medication to help regulate his emotions.

Jenn said her son enjoyed going to therapy and seemed to be making some progress, but his anger remained unpredictable.

During the worst of the conflicts, the teen has kicked holes in walls and broken appliances. He has attempted to run away from home and created weapons to try to hurt his parents and himself. In recent years, Jenn and Jason have had to call police to their house about once a month to get help restraining their son. They’ve also sometimes had to have him admitted to the hospital for brief psychiatric stays.

Keri Williams is a writer in North Carolina who advocates for parents raising children who have trauma-related behavioral issues, including attachment disorders that can manifest as intentional violence directed toward parents.

Williams’ own son became so violent that her family had to place him in a residential facility at age 10. He’s now 18.

“I actually thought I was the only person going through it,” Williams said. “I had no idea that this was actually a larger issue than myself.”

Williams manages a blog and Facebook page where parents like herself — who feel isolated and unsure of where to turn — can find others who can relate.

Many parents she meets online struggle to accept that they’re dealing with a serious domestic violence issue, she said.

“You just don’t want to think like that,” Williams said. “That’s just not how our culture is and how parents perceive things. And that denial actually is what keeps parents from getting their kids help.”

Jenn — the mother of the 15-year-old in Illinois — said parenting her son often feels like being stuck in an abusive relationship.

“But it’s different when it’s your son,” she said. “I don’t have a choice. I can’t just, you know, shove him away or break up with him.”

Jenn said anytime she sees a news story about a child who has killed a parent, she worries. Such events are extremely rare, and Jenn doesn’t want to think her son is capable of that.

“But, unfortunately, the reality is, when he is in those rages and in those meltdowns, he really isn’t thinking straight, and he’s very impulsive,” Jenn said. “So, it’s very scary.”

Despite all the challenges, she and her husband both said that adopting their son has brought them a lot of joy.

“It’s made me a better, stronger person, a better and stronger wife and teacher,” Jenn said.

But, she adds, she wishes there were more effective treatments that could help kids like her son live safely in the community and more places where traumatized parents could turn to find help.

“I feel like we’re doing everything that we can for him, but it just seems like it’s not enough,” Jenn said.

Just before the beginning of the school year, Jenn and Jason made the difficult decision to send their son to a residential facility for children with severe behavioral health issues. He’s living there now.

The couple wrestled with that choice for some time. The boy had already spent almost three years in residential treatment all told, starting when he was 10. He’d moved back home last year because they thought he was ready.

The boy’s 12-year-old sister said she has mixed feelings about her brother leaving home again to reenter residential treatment.

“It makes me feel happy and sad,” she said, “because, well, I love my brother. And I know he’ll be getting the help he needs.”

She’s comforted knowing her parents will be safe but said she’ll miss her brother a lot.

When Teens Abuse Parents, Shame And Secrecy Make It Hard To Seek Help