Before the Affordable Care Act, older adults who couldn’t afford to buy their own health insurance would count the days until their 65th birthday, when Medicare would kick in. Now, 10,000 Americans hit that milestone every day, but for some who have coverage through the ACA’s insurance marketplaces, Medicare may not be the obvious next step. 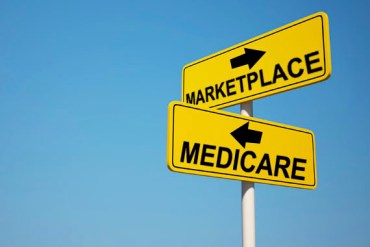 However, only a minority of those who have qualified for the health law subsidies that reduce their plans’ premium costs and cost-sharing will be able to keep that financial assistance once they become eligible for Medicare, Ozinal said. This option is available, he explained, only for people who would have to pay for Medicare Part A, the hospitalization benefit, but have not enrolled. That generally happens when seniors didn’t pay into Medicare for at least 10 years, which is sometimes the case for recent immigrants and people who may have come into the workforce late in their lives.

The majority of older adults — those eligible for free Part A coverage — cannot keep their subsidies when they qualify for Medicare, usually at age 65, according to an Internal Revenue Service spokesman.

Although seniors can pay full price to stay in their marketplace plans as long as they don’t enroll in Medicare, advocates say postponing the switch is   generally a bad idea. If they later decide to enroll, they will face late fees that will raise their premium costs, sometimes substantially.

Yet there are few guideposts to keep most consumers with marketplace insurance from making what could be an expensive mistake.  Except for people receiving  Social Security benefits before they turned 65, there’s  no reminder from the federal government or most state exchanges when it’s time to enroll in Medicare. There’s no warning to individual consumers when they become eligible for Medicare about the financial risks they could face if they don’t notify the marketplace and insurers to stop their subsidies. And there’s little help from the maze of conflicting marketplace and Medicare rules.

But there is a way to minimize the chance of problems, said Joe Baker, president of the Medicare Rights Center.

“The federal government should send a notice to everyone 64 years old saying you’re going to become eligible for Medicare at age 65 and here are your options, and some information about how to enroll, why to enroll and when you should enroll,” he said.

Determining whether marketplace coverage is better than Medicare depends very much on the individual, said Bonnie Burns, training and policy specialist for California Health Advocates, a nonprofit advocacy organization. For a small percentage of wealthy older adults, it may be cheaper to keep a marketplace plan rather than pay Medicare’s highest premiums for Part B, which covers outpatient care. But premiums should never be the only consideration, she said.

“It boils down to a comparison of benefits and costs,” Burns said. And that’s a difficult task since marketplace plans have different deductibles, cost-sharing, covered drugs and provider networks. Some plans restrict members to a limited number of providers, while traditional Medicare does not. And the calculation is also going to depend on whether you have chronic health conditions or if you are someone who doesn’t go to the doctor very often, she added.

Plus how much health care someone needs can also change over the years. In the final analysis, if someone is eligible for Medicare, Burns recommends signing up.

But whether they join Medicare or keep their marketplace policy, it is up to consumers to notify the marketplace and the insurer to stop the subsidies as soon as they qualify for Medicare. If they fail to do that and continue to receive subsidies after they became eligible for Medicare, they may have to repay that money when they file their taxes. If seniors with marketplace coverage also enroll in Medicare Part A, the government willeventuallycancel their marketplace plan if they don’t cancel it themselves.

Medicare rules established well before the marketplaces were created encourage people to sign up when they first become eligible — within the period from three months before and three months after their 65th birthday. People with job-based insurance or coverage through their spouse’s workplace, usually have until eight months after that insurance ends.

Enrolling later can result in penalties. People who would pay a monthly premium for Part A and sign up late may be charged an extra 10 percent in their premiums for  twice the number of years they could have had Part A but didn’t get it.

For Part B, beneficiaries may pay a 10 percent permanent penalty for every year they were late in signing up. Under some circumstances, there’s also a fee for postponing enrollment in a Medicare prescription drug plan.

“This is an area of great confusion,” said Burns. California Medicare counselors are reporting that people in marketplace plans are seeking help after their initial Medicare enrollment period has passed. “They didn’t understand the consequences of not signing up for Medicare,” she said.  “And some didn’t even know they should.”

When Turning 65, Consumers With Marketplace Plans Need To Be Vigilant In Choosing Health Coverage