People who fit this description are more likely to die from COVID-19 than any other group in the country.

They are perishing quietly, out of sight, in homes and apartment buildings, senior housing complexes, nursing homes and hospitals, disproportionately poor, frail and ill, after enduring a lifetime of racism and its attendant adverse health effects.

Yet, older Black Americans have received little attention as protesters proclaim that Black Lives Matter and experts churn out studies about the coronavirus.

A KHN analysis of data from the Centers for Disease Control and Prevention underscores the extent of their vulnerability. It found that African Americans ages 65 to 74 died of COVID-19 five times as often as whites. In the 75-to-84 group, the death rate for Blacks was 3½ times greater. Among those 85 and older, Blacks died twice as often. In all three age groups, death rates for Hispanics were higher than for whites but lower than for Blacks.

(The gap between Blacks and whites narrows over time because advanced age, itself, becomes an increasingly important, shared risk. Altogether, 80% of COVID-19 deaths are among people 65 and older.)

The data comes from the week that ended Feb. 1 through Aug. 8. Although breakdowns by race and age were not consistently reported, it is the best information available.

Social and economic disadvantage, reinforced by racism, plays a significant part in unequal outcomes. Throughout their lives, Blacks have poorer access to health care and receive services of lower quality than does the general population. Starting in middle age, the toll becomes evident: more chronic medical conditions, which worsen over time, and earlier deaths.

Yet many vulnerable Black seniors are deeply distrustful of government and health care institutions, complicating efforts to mitigate the pandemic’s impact.

The infamous Tuskegee syphilis study — in which African American participants in Alabama were not treated for their disease — remains a shocking, indelible example of racist medical experimentation. Just as important, the lifelong experience of racism in health care settings — symptoms discounted, needed treatments not given — leaves psychic scars.

“A lot of Black elders in this area migrated from the South a long time ago and were victims of a lot of racist practices growing up,” said Margaret Boddie, 77, who directs the program. “With the pandemic, they’re fearful of outsiders coming in and trying to tell them how to think and how to be. They think they’re being targeted. There’s a lot of paranoia.”

“They won’t open the door to people they don’t know, even to talk,” complicating efforts to send in social workers or nurses to provide assistance, Boddie said.

In Los Angeles, Karen Lincoln directs Advocates for African American Elders and is an associate professor of social work at the University of Southern California.

“Health literacy is a big issue in the older African American population because of how people were educated when they were young,” she said. “My maternal grandmother, she had a third-grade education. My grandfather, he made it to the fifth grade. For many people, understanding the information that’s put out, especially when it changes so often and people don’t really understand why, is a challenge.”

What this population needs, Lincoln suggested, is “help from people who they can relate to” — ideally, a cadre of African American community health workers.

With suspicion running high, older Blacks are keeping to themselves and avoiding health care providers. 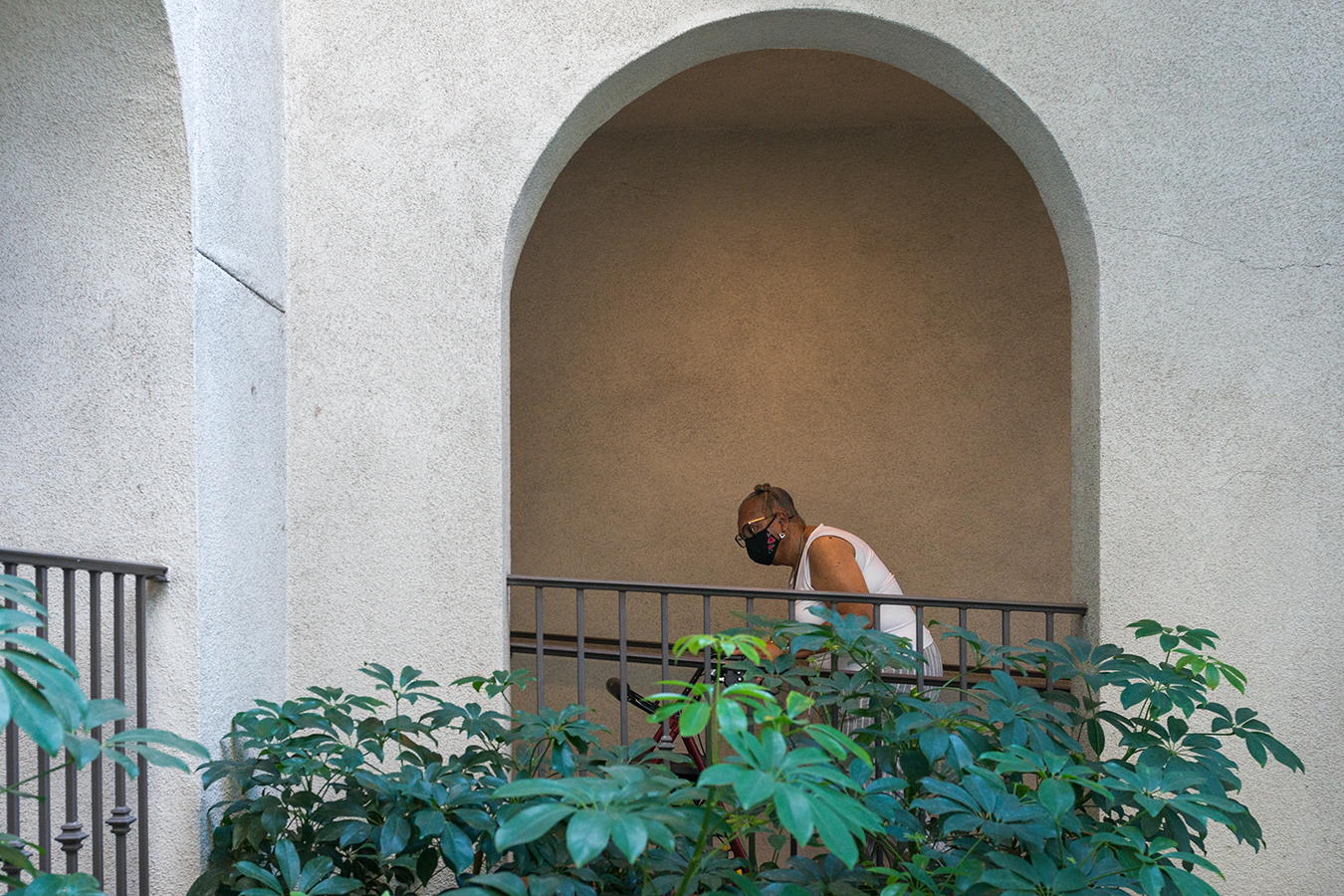 Mardell Reed has high blood pressure, anemia, arthritis and thyroid and kidney disease. The 80-year-old says she rarely goes outside because of COVID-19. “I’m just afraid of being around people,” she says.(Heidi de Marco/KHN)

“Testing? I know only of maybe two people who’ve been tested,” said Mardell Reed, 80, who lives in Pasadena, California, and volunteers with Lincoln’s program. “Taking a vaccine [for the coronavirus]? That is just not going to happen with most of the people I know. They don’t trust it and I don’t trust it.”

Reed has high blood pressure, anemia, arthritis and thyroid and kidney disease, all fairly well controlled. She rarely goes outside because of COVID-19. “I’m just afraid of being around people,” she admitted.

Other factors contribute to the heightened risk for older Blacks during the pandemic. They have fewer financial resources to draw upon and fewer community assets (such as grocery stores, pharmacies, transportation, community organizations that provide aging services) to rely on in times of adversity. And housing circumstances can contribute to the risk of infection.

In Chicago, Gilbert James, 78, lives in a 27-floor senior housing building, with 10 apartments on each floor. But only two of the building’s three elevators are operational at any time. Despite a “two-person-per-elevator policy,” people crowd onto the elevators, making it difficult to maintain social distance.

“The building doesn’t keep us updated on how they’re keeping things clean or whether people have gotten sick or died” of COVID-19, James said. Nationally, there are no efforts to track COVID-19 in low-income senior housing and little guidance about necessary infection control.

Large numbers of older Blacks also live in intergenerational households, where other adults, many of them essential workers, come and go for work, risking exposure to the coronavirus. As children return to school, they, too, are potential vectors of infection. 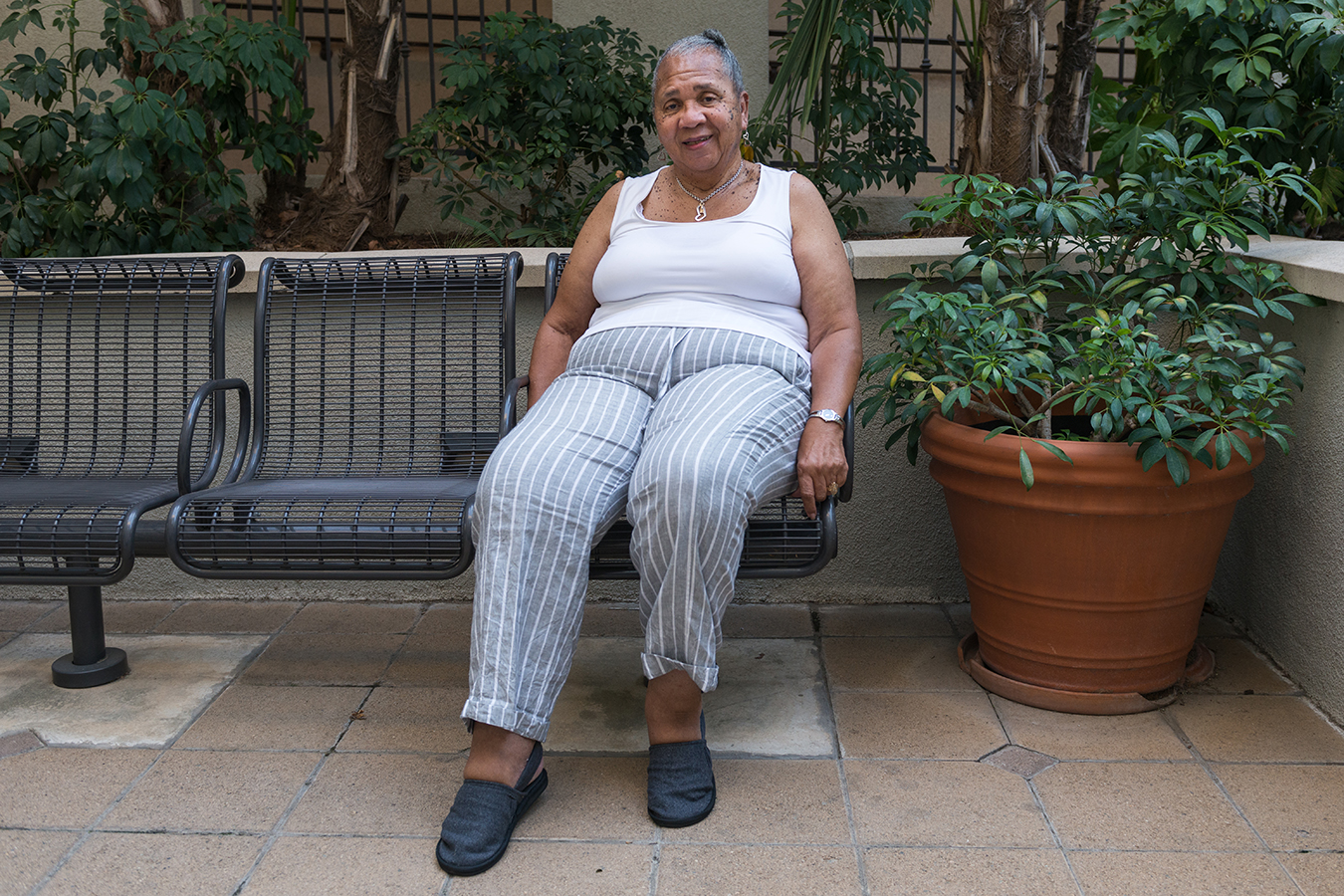 Mardell Reed says she knows only a couple of people who have been tested for COVID-19. African American seniors are deeply distrustful of government and health care institutions. As for being vaccinated, “that is just not going to happen with most of the people I know,” says Reed. “They don’t trust it and I don’t trust it.”(Heidi de Marco/KHN)

In recent years, the American Psychological Association has called attention to the impact of racism-related stress in older African Americans — yet another source of vulnerability.

This toxic stress, revived each time racism becomes manifest, has deleterious consequences to physical and mental health. Even racist acts committed against others can be a significant stressor.

“This older generation went through the civil rights movement. Desegregation. Their kids went through busing. They grew up with a knee on their neck, as it were,” said Keith Whitfield, provost at Wayne State University and an expert on aging in African Americans. “For them, it was an ongoing battle, striving yet never arriving. But there’s also a lot of resilience that we shouldn’t underestimate.”

This year, for some elders, violence against Blacks and COVID-19’s heavy toll on African American communities have been painful triggers. “The level of stress has definitely increased,” Lincoln said.

During ordinary times, families and churches are essential supports, providing practical assistance and emotional nurturing. But during the pandemic, many older Blacks have been isolated.

In her capacity as a volunteer, Reed has been phoning Los Angeles seniors. “For some of them, I’m the first person they’ve talked to in two to three days. They talk about how they don’t have anyone. I never knew there were so many African American elders who never married and don’t have children,” she said.

Meanwhile, social networks that keep elders feeling connected to other people are weakening.

“What is especially difficult for elders is the disruption of extended support networks, such as neighbors or the people they see at church,” said Taylor, of the University of Michigan. “Those are the ‘Hey, how are you doing? How are your kids? Anything you need?’ interactions. That type of caring is very comforting and it’s now missing.”

In Brooklyn, New York, Barbara Apparicio, 77, has been having Bible discussions with a group of church friends on the phone each weekend. Apparicio is a breast cancer survivor who had a stroke in 2012 and walks with a cane. Her son and his family live in an upstairs apartment, but she does not see him much.

“The hardest part for me [during this pandemic] has been not being able to go out to do the things I like to do and see people I normally see,” she said.

In Atlanta, Celestine Bray Bottoms, 83, who lives on her own in an affordable senior housing community, is relying on her faith to pull her through what has been a very difficult time. Bottoms was hospitalized with chest pains this month — a problem that persists. She receives dialysis three times a week and has survived leukemia.

“I don’t like the way the world is going. Right now, it’s awful,” she said. “But every morning when I wake up, the first thing I do is thank the Lord for another day. I have a strong faith and I feel blessed because I’m still alive. And I’m doing everything I can not to get this virus because I want to be here a while longer.”

Why Black Aging Matters, Too