When Maria and Vadim Brodsky’s then 7-year-old daughter needed an MRI two years ago to examine a tumor in her head, they took her to a hospital in their health plan’s network and were dismayed to receive a $4,500 bill.

The couple had a $6,000 deductible on their family plan. And even though the bill was reduced to $3,000 — the price the provider and insurer had agreed to by contract — the Brodskys had to cover all of it. 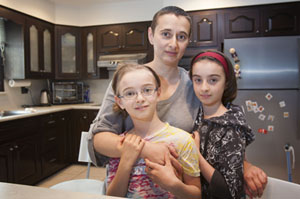 Maria Brodsky and her two daughters Sarah, 9, left, and Rachel 10, right, in the kitchen of their Huntington Valley, Pa., home (Photo by Ed Hille/Philadelphia Inquirer).

The following year when their daughter needed another MRI, the Huntingdon Valley couple took her to a standalone facility and put the procedure on a credit card. The total bill: $600.

Welcome to the new world of health insurance where high deductible plans are growing more popular and the consumers in those plans often have an incentive to haggle with providers.

Although many plans still protect people from high out-of-pocket costs for care, these days an increasing number of consumers have cheaper, high deductible plans where they must cover the first $1,000, $5,000 or even $10,000 of care before insurance kicks in.

For this group, it pays to shop around, say experts.

“It’s definitely worth it to look at different hospitals or outpatient services, because prices can vary dramatically,” says Carrie McLean, senior manager of customer care at eHealthInsurance.com, an online vendor.

Five years ago, 12 percent of workers faced a deductible of at least $1,000 for single coverage. Today more than a third do, according to the Kaiser Family Foundation’s 2012 survey of employer-sponsored plans.  Increasingly, a high-deductible plan, often linked to a tax-advantaged health savings account, is the only insurance offered on the job, even at big companies that have long offered generous coverage.

Proponents of high-deductible plans say consumers will make more cost-conscious health care choices if they have to spend more of their own money. According to an analysis by the Robert Wood Johnson Foundation, consumers in such plans cut their medical spending by between 5 and 14 percent. But results were mixed on whether they cut back only on unnecessary care or on treatment that was needed.

As patients increasingly owe a bigger share of the bill, “providers and patients have gotten creative about paying out-of-pocket costs,” says Mark Rukavina, a principal at Community Health Advisors in Boston who consults for nonprofit hospitals. “The price that appears on an invoice may be fluid.”

Insurers in recent years have helped ease some of the burden by only billing consumers for the companies’ lower contracted rates just for the companies’ lower, contracted rates. And the Affordable Care Act takes some pressure off by requiring many health plans to cover preventive services without applying those charges to the deductible. Still, high bills are a fact of life.

One effective way patients can cut costs is by agreeing to pay cash at the time a service is provided. Many doctors and hospitals offer such “prompt pay discounts.”

“If they’re willing to pay in cash and I don’t have to wait six weeks for reimbursement [from the insurer], I’ll reduce the bill by 10 to 25 percent,” says Dr. Joseph Mambu, a family physician in Lower Gwynedd, Pa.

Patients who pay hospitals within 30 to 60 days of billing — the time frames vary — can often get up to a 30 percent discount, adds Rukavina.

It’s also worth asking a hospital about their financial assistance policies, says Rukavina. They’re not necessarily only for uninsured patients. “Many have policies for the uninsured as well as underinsurance and might provide relief for the amounts due after insurance has paid,” he says.

Paying directly, however, can have downsides because it bypasses the insurance claims process, advocates warn. For one thing, those immediate payments won’t be applied to the deductible, so if the patient has more medical expenses later in the year, he or she won’t get “credit” for the amount spent. And, if there’s an error in the bill, you may not find out about it.

“If you don’t use your insurance, the bill won’t be reviewed [by the insurer] for errors,” says Pat Palmer, the founder of Medical Billing Advocates of America, which helps consumers resolve medical billing problems.

Some patients are willing to take those chances to snag a “cash” discount.

Typically, consumers’ medical bills are adjusted to reflect the contracted rate that the provider has agreed to accept from the insurer. This lower rate is applied even when consumers are paying 100 percent of the bill because they haven’t yet satisfied their deductible.

That’s how the Brodsky family’s first bill was reduced.

Still, it doesn’t hurt to ask. “As consumers, we shop around for just about everything else,” says Martin Rosen, executive vice president at HealthAdvocate, a company in Plymouth Meeting, Pa., that gives consumers clinical and administrative help to navigate the health system.

You are more likely to negotiate a lower price for care that’s not covered by insurance or that’s done by an out-of-network provider, say experts. “Usually patients are very successful in appealing [higher charges for] any out-of-network providers that took care of them while at an in-network facility,” says Palmer.

Insurers often have different discount deals with different types of facilities, says Palmer. At a standard radiology practice, the discount for an MRI may be only 20 percent, she says, but it can be 40 percent at a standalone imaging facility. Charges at teaching hospitals are often higher than at other facilities, she says. “Look to have the service done outside the hospital or hospital-owned facility,” says Palmer. “It’s often going to be less expensive.”

Drug prices vary widely, even for generic drugs. A recent Consumer Reports analysis compared prices at 200 pharmacies for five common generic drugs. The variation between the highest and lowest priced stores was a hefty $749 for the five drugs. The takeaway: shop around.

Dawn Herbert, 41, of Philadelphia saves a $14 copayment each month by filling her prescription for generic birth control at Walmart instead of CVS. “Whatever the insurance is paying for that drug, Walmart is considering it payment in full,” she says.

With High Deductible Health Plans, It Pays To Shop Around For Care