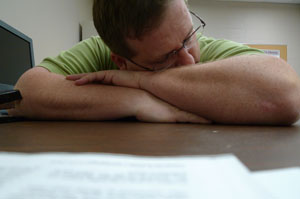 “Employers haven’t looked at the impact of health on absence from work or on performance while at work,” says Thomas Parry of the Integrated Benefits Institute, a nonprofit group that includes employers and benefit firms among its members.

Improving workers’ health through wellness programs and other efforts, Parry says, will pay off in the short term with improved productivity and fewer days off to illness. Long range, it may also slow rising medical costs if workers’ health improves.

The institute used its own data, along with data from the Bureau of Labor Statistics, to come up with the estimate.  Of that total, $227 billion are costs associated with workers taking days off because they are sick or showing up at work and underperforming.

An additional $117 billion is associated with wage replacement, including worker’s compensation costs and disability payments.

Those costs add up to more than the $232 billion Parry says private employers spend on medical coverage for their workers each year.

“To focus only on costs is missing the boat,” he says. “Unless we think about a healthier workforce, we will never crack this nut.”

The value of wellness and disease prevention programs has been widely debated, but many analysts think such programs reduce spending over time. An increasing percent of employers are tying financial incentives, such as insurance discounts, to employees actively participating in wellness efforts. Some even require them to meet specific medical guidelines for such things as cholesterol, blood pressure or weight.

To slow their cost growth, many employers have also raised deductibles.  Supporters of high-deductible plans say workers will act as better consumers of health care if they’re paying more out of their own pocket. Parry says that might be true, but the flip side is that some workers pay also put off needed care.

“And that may have productivity consequences,” he says.