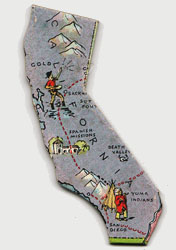 Researchers at the Center for the Health Professions at the University of California, San Francisco, wrote that “distribution (of health professionals) poses a bigger challenge than absolute numbers.” They found that the San Francisco Bay Area, Los Angeles, Orange County and Sacramento area regions that have more residency and training programs will be better equipped to handle the expected increase in patient demand. But rural and underserved areas such as the Inland Empire and the San Joaquin Valley will be significantly strained.

“The visual is really striking when you see which parts of the state are not well served,” said Susan Chapman, one of the report’s authors and the director of the center’s Allied Health Workforce Studies. “The issue is not do we have enough doctors. We are certainly graduating more doctors, but we’re not necessarily getting them to the areas that we need them to be and getting them into primary care, the area we need them to be.”

Researchers analyzed data on the numbers of physicians, nurses, dentists and nearly 50 other health professionals, including pharmacy technicians, respiratory therapists and medical assistants. They then mapped out current data on workforce availability and examined how that might be impacted by the 4 million to 6 million newly insured in the report “California’s Health Care Workforce: Readiness for the ACA Era.”

California is a diverse state where 40 percent of the population speaks a language other than English and 20 percent do not speak English “very well,” the report noted. It points out that the workforce will need to be more linguistically and culturally competent, especially since the newly insured will be even more diverse — with more than half of them being people of color and a third to a half of them speaking English “less than well.” For example, currently only 5 percent of California doctors and 8 percent of nurses are Latino despite the fact that 37 percent of the population is. Federal programs designed to train more minority health professionals to work in under served communities are currently under threat of losing funding.

“The lesson should really be to take a careful look at the workforce,” Chapman said. “Hone in on where the shortages are going to be and how to address them and get a jump on it before the patients appear at the door.”