SAN JOSE, Calif. — Angelica Cabrera doesn’t have insurance. There was a time when she thought she didn’t need it, but now that she’s trying to pay for school and rent on her own, she can’t risk getting sick.

“It’s been really tough. Sometimes, I can’t even pay my bills,” said the 22-year-old communications major at San Jose State University. “I really need this.”

She has severe allergies, and when she was 18, doctors found non-cancerous lumps in her breasts. She worries she could get breast cancer, like her grandmother.

“It’s always in the back of my mind. Is it going to happen again?” Cabrera said.

On campus recently,  armed with fliers, outreach worker Amanda Dougherty was glad to field her questions about insurance – and whipped out her phone to take down Cabrera’s contact information. 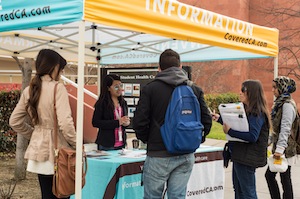 As the March 31 deadline approaches for enrollment in Obamacare, young adults like Cabrera are considered a prime target. Sometimes called “young invincibles,” these adults between the ages of 18 and 34 supposedly see themselves as invulnerable and health insurance as unnecessary.

But like Cabrera, many don’t view themselves as invincible at all – just strapped for cash and unsure of their options.

“The myth about students is…that they don’t want insurance,” said Walter Zelman, chairman of California State University Los Angeles Department of Public Health and director of a university-wide outreach project to educate and sign up students and staff.

Citing a recent poll at San Jose and two other campuses, he said “about 80 percent said they are uninsured because they perceive they can’t afford it.”

Zelman’s California State University Health Insurance Education Project is funded by a $1.25 million grant from Covered California, the state’s new insurance marketplace.  Young adults are crucial to making the federal law work: Aside from benefiting from coverage in case of illness or accident, they are needed to balance out the risk in a pool dominated by older, often less healthy enrollees.

The state is lagging in persuading enough of them to enroll.

Adults from 18 to 34 make up 36 percent of those who would qualify for subsidized coverage in Covered California, but just 27 percent have enrolled, figures released this month show.

According to Zelman, CSU students are largely lower income and disproportionately minorities—characteristics often associated with being uninsured. The three-campus poll found that 70 to 75 percent of CSU students live in households that might make them eligible for either subsidies under Covered California or Medi-Cal.

“I don’t think nationwide there is a riper block of people that Obamacare advocates should be going after to try and enroll,” Zelman said.

At 15 of 23 Cal State campuses, young advocates—mostly students and recent graduates– are pursuing their peers with vigor. 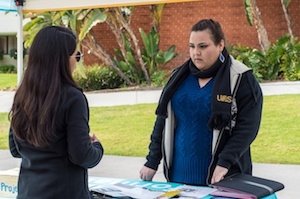 Some, like Carla Bracamonte, are recent enrollees themselves. As she briskly walked across the Cal State campus lugging a box of flyers, pamphlets and sign-up sheets, Bracamonte explained that not too long ago she was a public health student here– enrolled full time, working part time and uninsured.

“Previous to the new health law, I was priced out of the market,” she said. “I simply couldn’t afford it, so I went without insurance.”

She knows the tough calculations that young people must make.

Take Angelica Pizano, 27, who dropped by her booth on campus the other day. She suffers from high blood pressure and polycystic ovarian syndrome.  An employee at California State LA since 2012, she was hired on a temporary basis so is not eligible for employer-sponsored insurance.

She stopped to describe her predicament to Bracamonte. She was told she would have to pay a monthly premium of $86 – out of reach for someone who already hardly has enough to pay her rent, car and student loans.

Instead of signing up for Covered California, she will probably pay a penalty of about $200 this year, she said.

“I will be honest, it’s cheaper for me to be fined than to pay the monthly fee,” she said. “I’m just crossing my fingers I won’t get sick.”

Other students and staff are surprised to learn they qualify for subsidies that put coverage within reach.

“I was under the impression I was going to be paying hundreds of dollars a month for health insurance, when actually that’s not true,” said Desaray Ross, a recent Cal State L.A. graduate and part-time employee at the university’s cultural center.

Like many students, Maria Salazar, a 28-year-old uninsured graduate student at California State University Fullerton, didn’t know much about the new health law or where to start.

“I had heard about Obamacare in the news, but was too busy to learn more,” she said.

Salazar would frequent the campus health center when she was ill, but knew it wasn’t a substitute for health insurance.

Then Salazar attended a health forum hosted on campus and learned that under the new health law, combined with her modest income as a part-time graduate assistant, she qualified for Medi-Cal.

It was a huge relief.

“Just thinking an accident could happen to me was really frightening,” she said.

Young But Not So Invincible in California