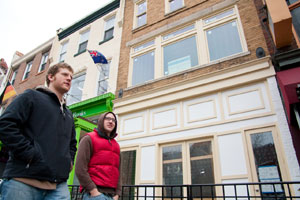 Roommates Jordan Watts and Dominic Ouellette are both uninsured and have different views on the possiblity of being required to buy a ‘catastrophic’ health plan if a health reform bill passes. (Chris Zimmer/KHN)

Like most Americans, Dominic Ouellette, an uninsured 23-year-old waiter in Washington, likely would be required to have health coverage under the legislation being debated in Congress. Because he’s younger than 30, though, he could buy a low-cost plan under the Senate bill and the new White House proposal.

These “catastrophic” illness plans would make insurance less of a financial burden, but they would require high deductibles – at least $5,950 in out-of-pocket spending before most benefits kicked in.

That’s igniting a fierce debate over how much young adults – sometimes known as the “young invincibles” because many don’t believe they need insurance – would benefit from such plans.

Critics warn that the low-cost policies would leave young people financially vulnerable and reluctant to seek care. “This would help the insurance companies, but it would not do much to help the individuals insured,” says Sen. Bernie Sanders, I-Vt.

Supporters counter that the plans would help young people who otherwise might be uninsured. “Any coverage is always better than no coverage,” says Leslie Norwalk, acting administrator of the Centers for Medicare & Medicaid Services during the George W. Bush administration.

People in their 20s have the highest uninsured rate of any age group in the country and make up nearly a third of the 46 million uninsured, according to The Commonwealth Fund.

Under the health care overhaul bills, about 10 million lower-income young adults would qualify for Medicaid, the state-federal health program for low-income people that would be expanded, or for government subsidies to buy private insurance.

‘Insurance in name only’

That could still leave millions of young adults who would get only small subsidies, or none at all, and they would be the most likely purchasers of the catastrophic plans.

Under the Senate bill and the Obama proposal, the plans would be offered on new state insurance exchanges that would be set up in 2014 for people who buy their own insurance and for some small businesses. They would be sold only to people under 30 and to others exempted from buying insurance because of financial hardship.

“This plan is insurance in name only,” a group called Y.I. Want Change said in a letter to Senate Majority Leader Harry Reid of Nevada. The coalition of liberal groups such as College Democrats of America, the youth arm of the Center for American Progress, and the Young Invincibles, wants emergency-room care and three primary-care doctor visits covered before the deductible is paid.

The Senate bill requires the catastrophic plans to cover certain screening tests and immunizations even if the deductible hasn’t been met. It’s ambiguous on coverage for primary-care visits before the deductible is paid, says Ari Matusiak, the Young Invincibles’ co-founder and a Georgetown University law student.

The House bill does not include a catastrophic plan but has more generous subsidies to pay for coverage. 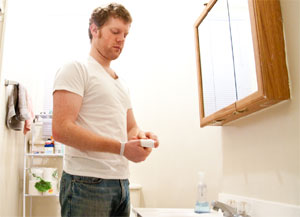 Dominic Ouellette recently went to the emergency room for stitches in his thumb, costing him several hundred dollars, none of which would have been covered under a catastrophic policy. (Chris Zimmer/KHN)

Matusiak, 33, estimates that people in their 20s would pay $138 a month for a catastrophic plan, compared with $190 for the cheapest conventional policy on the exchanges. He wants to raise the premium on the catastrophic plan by a few dollars to improve coverage.

The Young Invincibles say 4 million people between 19 and 29 – and another 3 million older adults – likely would buy these plans, which could not be purchased with the health subsidies.

Without the low-cost alternatives, Norwalk says, young adults might forgo coverage and pay a penalty for not buying insurance. Under Obama’s plan, individuals would pay penalties of up to $695, or 2.5% of their annual income, whichever is higher.

Jordan Watts, an uninsured 24-year-old waiter who is Ouellette’s roommate, said a low-premium, high-deductible plan sounds like a good idea. “If the price is right, it would be good to have,” he says. “It’s better than nothing.”

But Ouellette, who was covered by his parents’ insurance until he turned 21, says it’s impractical for a policy to require the enrollee to spend a lot before getting benefits. “I don’t understand what the point is,” he says.

A recent trip to a hospital emergency department underscored his concerns. After cutting his thumb on a broken glass while washing dishes, Ouellette ended up with eight stitches – and a bill for several hundred dollars. A catastrophic policy wouldn’t have covered any of it.

How Health Reform Could Affect The ‘Young Invincibles’