An increasing number of seniors who spend time in the hospital are surprised to learn that they were not “admitted” patients — even though they may have stayed overnight in a hospital bed and received treatment, diagnostic tests and drugs. 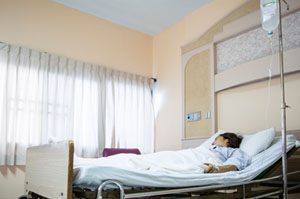 Because they were not considered sick enough to require admission but also were not healthy enough to go home, they were kept for observation care, a type of outpatient service. The distinction between inpatient status and outpatient status matters: Seniors must have three consecutive days as admitted patients to qualify for Medicare coverage for follow-up nursing home care, and no amount of observation time counts for that three-day tally. That leaves some observation patients with a tough choice: Pay the nursing home bill themselves — often tens of thousands of dollars – or go home without the care their doctor prescribed and recover as best they can.

Angry seniors have sued Medicare and appealed to Congress to change the rules they say make no sense. Although Medicare officials recently began experimenting with limited exemptions, they have been unable to resolve the problem.

But most observation patients with private health insurance don’t face such tough choices. Private insurance policies generally pay for nursing home coverage whether a patient had been admitted or not.

Regardless of what type of insurance they have, patients are kept for observation for the same reason — so that doctors can decide if they need care that can only be provided in the hospital. They may also receive diagnostic tests and, in some cases, treatment.

Medicare and most private insurers consider observation care an outpatient service – like a doctor’s visit or a lab test — even though observation patients may spend a night or more in a hospital room.

What Does It Cost?

Because observation care is provided on an outpatient basis, patients usually have co-payments for doctors’ fees and each hospital service. And they have to pay extra for routine drugs that they take at home if the hospital provides them during the observation period. For seniors who do not have a supplemental insurance policy that helps cover these expenses, the bill can be oppressive, according to Terry Berthelot, a senior attorney at the Center for Medicare Advocacy, a public interest law firm based in Connecticut.

Like Medicare beneficiaries, privately insured patients are usually responsible for a share of the cost of each treatment or test they receive when hospitalized for observation.

Those bills can add up, according to a study by the Health Care Cost Institute, a nonprofit, nonpartisan research organization. Privately insured people receiving observation and other outpatient services in the hospital paid about four times as much out of pocket as admitted patients in 2012 — an average of $47 per admitted person compared to $199 for an outpatient.

How Do You Know If You’ve Been Admitted?

Ask your doctor or hospital officials to be sure, because patients in observation care are usually treated in the same units and rooms as admitted patients and might not know that they have not been admitted. Most find out when they get a bill.

Although Medicare does not require that beneficiaries be notified when they are on observation status, at least two states — Maryland and New York — have passed laws compelling hospitals to tell all patients when they are under observation care and, as the Maryland notice warns, “that may increase the patients’ out-of-pocket costs for their stay.”

How Common Is Observation Care?

The number of Medicare observation patients has shot up 88 percent over the past six years, to 1.8 million in 2012, according to the Medicare Payment Advisory Commission, an independent government agency. Even after accounting for the overall growth in the Medicare population, the commission found that the number of observation stays per 1,000 beneficiaries eligible for Medicare’s Part B outpatient services rose 61 percent from 2007 to 2012.

That’s more than three times faster than the 18 percent increase among privately insured patients over the same period reported by the Health Care Cost Institute, which analyzed 5.7 billion claims from employer-sponsored insurance policies covering a representative sample of 40 million beneficiaries younger than 65.

“There is generally no commercial policy requirement that skilled-nursing-facility care can only be covered following a three-day inpatient admission — which is what Medicare requires,” said Kathleen Shure, a senior vice president at the Greater New York Hospital Association, which represents 150 hospitals.

“This just generally negatively affects Medicare recipients,” Bob Armstrong, vice president of elder care services for St. Mary’s Health System in Lewiston, Maine, said at the Senate Special Committee on Aging’s hearing on observation care in July. “The [private] insurance payers don’t have the same limitations in their contracts with us; they just require that the person need the skilled care.”

The cost difference can be huge: In some parts of the country, a person without insurance coverage might pay more than $10,000 for a month in a nursing home. When insurance covers the bill, the out-of-pocket costs for consumers might be little or even none, depending on the type of plan.

For Cigna’s 12 million members, “admission to a skilled nursing facility may occur at any time, whether hospitalization is inpatient or observation, and depends solely on the needs of the patient,” said company spokesman Mark Slitt.

Even most Medicare Advantage plans, the private insurance policies that are sold as an alternative to traditional Medicare and that are subsidized by the federal government, don’t require members to have a three-day hospital admission in order to receive nursing home coverage. This year, 95 percent of the 2,526 plans available have waived that requirement, according to an analysis for Kaiser Health News by Avalere Health, a health research firm.

Is Medicare Considering Any Changes?

Medicare is conducting pilot projects at hospitals across the country to find out what happens if it follows the example of private insurers and exempts seniors from the three-day requirement. If the experiments lead to better care and lower costs, officials say they may expand the exemption to more Medicare patients.

You’re Being Observed In The Hospital? Patients With Private Insurance Better Off Than Seniors