Updated, 7/29 at 11:00 AM: Florida officials confirmed that at least four cases of the Zika virus in the state are likely the result of mosquito-borne transmission.

In a span of 13 months, a relatively unknown virus morphed into a global health emergency thanks to a pest less than four millimeters wide.

The Pan American Health Organization reports more than 50,000 people in the Western Hemisphere are infected with the Zika virus. The primary mode of transmission is by mosquitoes — the Aedes aegypti, to be precise — and its relative the Aedes albopictus. But the virus can also be transmitted sexually.

For most, the illness causes flu-like symptoms. It has also been connected to Guillain–Barré Syndrome, which is marked by muscle weakness in the arms and legs, and sometimes severe nerve damage and even paralysis.

Pregnant women are considered especially at risk of the threat, because Zika can cause severe birth defects, such as microcephaly.

So far, no cases of locally transmitted Zika infection have been reported in the U.S. But, with summer vacations on many people’s minds, here is a breakdown of what travelers should know about where the virus is most likely to circulate and how the risks could affect travel plans.

What is the normal season for these mosquitoes?

The Aedes aegypti mosquito thrives in hot, humid, tropical climates. This is why, in the U.S., states such as Texas and Florida are expected to be among the hardest hit. Meanwhile, one study found more than 22 million people live in areas of the country where the Aedes mosquito can thrive all year.

But these pests are also not immune to changing weather patterns.

Experts note, though, that mosquitoes generally follow the seasons’ temperature fluctuations. Their numbers rise in the spring and reach their peak in the summer, then dwindle in autumn until they die in the winter. In tropical conditions, the mosquitoes can live all year round.

This means travelers need to be conscious of the weather patterns in their destinations to determine the Zika risk they could face.

Where have the outbreaks occurred so far this season and what areas are expected to be hard hit?

Forty countries and territories in the Western Hemisphere have locally transmitted Zika, according to the latest report from the Pan American Health Organization. The CDC also is tracking Zika virus activity.

The Zika HealthMap, an online disease tracker created by Boston Children’s Hospital and Harvard School of Medicine, shows the number of Zika cases in South America are concentrated in areas along the equator and near a coast, like western Colombia and eastern Brazil.

Countries such as Brazil, Bolivia and Paraguay that have areas with consistently warm weather and are beginning their dry seasons will likely see fewer mosquitoes, said Mauricio Santillana, faculty member at Boston Children’s Hospital and HealthMap lead researcher. In some such locations, the number of cases are already declining, based on WHO data.

Meanwhile, some countries entering their wet, rainy season, such as Panama and Dominica, are reporting lower case numbers than expected. However, Santillana said some Caribbean countries, such as Martinique and Jamaica, are experiencing erratic rates of infection.

Though no cases have yet been locally transmitted in the continental U.S., New York, Florida and Texas have reported the highest tallies of travel-associated cases, according to the CDC. Meanwhile, Puerto Rico has reported nearly 2,000 locally acquired cases. 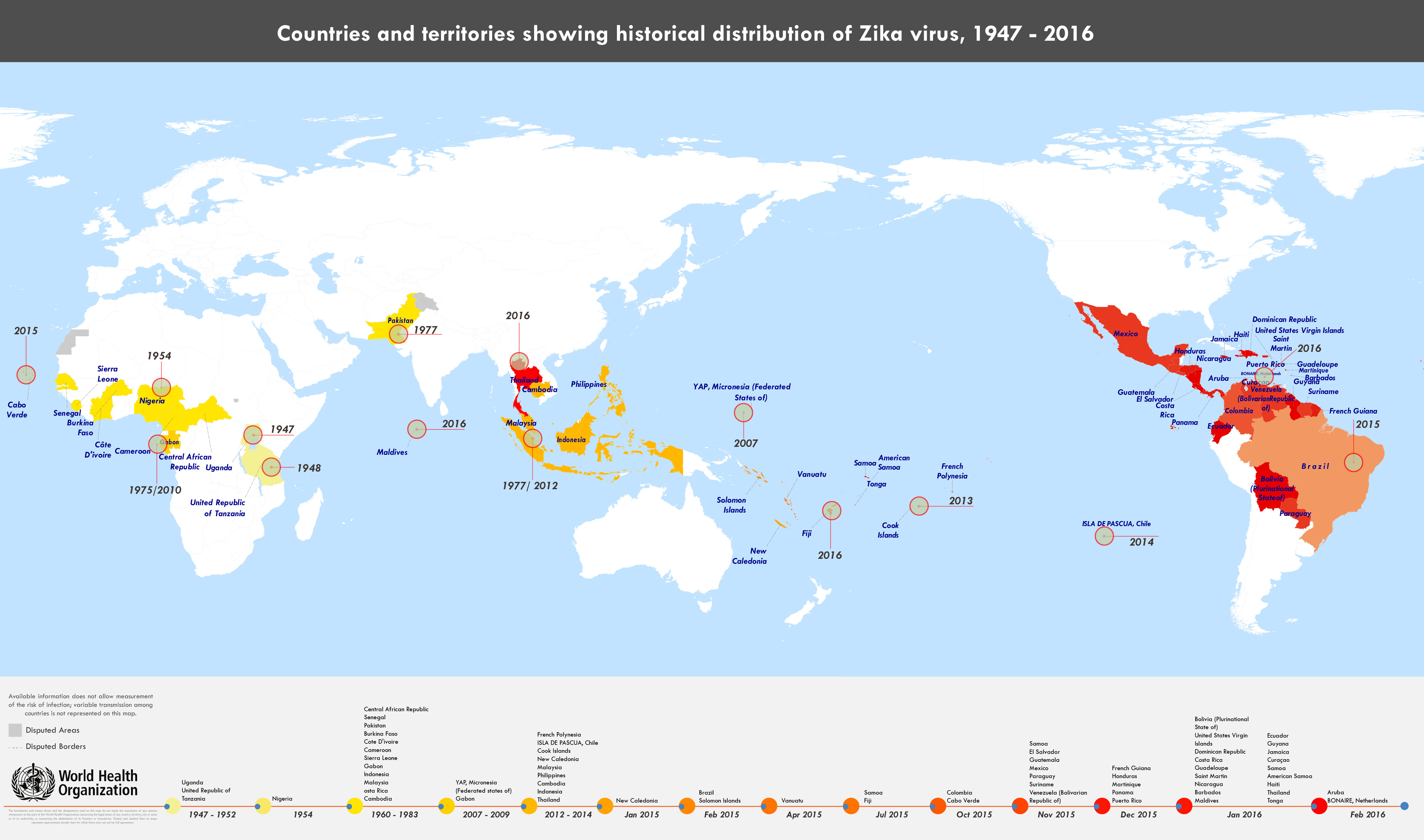 Countries and territories showing historical distribution of Zika virus, 1947 to 2016. (Courtesy of the World Health Organization)

Am I safe to travel?

The CDC implemented a three-level warning system to categorize the danger associated with traveling to each country affected by the virus. As of July 5, all countries affected by the epidemic are categorized as Level 2, which means Zika poses a threat to the general public and a danger to pregnant women.

The notice advises travelers to take “enhanced precautions” such as treating skin with Environmental Protection Agency-registered insect repellents and clothing with the insecticide permethrin to reduce the risk of infection.

Destinations located above an elevation of 6,500 feet are considered safe for all travelers.

Take seasons into consideration when traveling. Destinations south of the equator are now beginning their winter season, which means the Zika threat may be ebbing.

The CDC strongly discourages women who are pregnant from visiting any area of Brazil below an elevation of 6,500 feet. In addition, women who are trying to become pregnant should talk to their doctors about their risk of infection before departing.

Why are these mosquitoes so good at spreading disease like Zika?

The Aedes aegypti mosquito’s ability to spread disease lies in its behavior.

These Zika carriers can often live inside, lurking in closets and under beds. They also tend to move from person to person rather than being satisfied with one target, biting with speed and aggression. In addition, they feed throughout the day, but their most active times are at sunrise and sunset. They also deliver a relatively painless bite, targeting ankles and elbows, according to the CDC.

“If you wanted to design the ideal vector to spread disease in humans, you couldn’t get much better than Aedes aegypti,” said Scott Weaver, director of the Institute for Human Infection and Immunity at the University of Texas Medical Branch.

How can I protect myself from the mosquitoes?

The CDC recommends taking the following steps to prevent contracting the Zika virus: