This story is produced in collaboration with 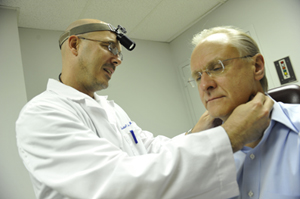 After relocating to Washington, D.C., Clint Morrison needed a doctor to follow up a tonsillectomy he had a few weeks earlier in California. But when he started calling specialists in his health plan’s directory, he struck out: they either weren’t taking new patients or had no openings for several weeks.

So in September Morrison went to a website called www.zocdoc.com. He could see doctors’ appointment calendars and identify those that took his insurance and were located near his office. With a couple clicks, Morrison, 24, scheduled an appointment for the next day with Mark Dettelbach, an ear, nose and throat doctor. “It was painless,” Morrison says of the experience.

Dettelbach’s group practice is one of a growing number that allow patients to schedule appointments online – eliminating multiple calls, waiting on hold and increasing the likelihood of finding someone with an opening.

About 16 percent of family doctors used online scheduling in 2009, up from 6 percent in 2005, according to the American Academy of Family Physicians. Most are doing it on their own or through health systems where they work.

Several factors drive the trend. On the doctors’ side, it’s mostly the need to add patients and reduce overhead costs. They’re also growing more comfortable with computers. About half of family doctors use electronic health records and 44 percent prescribe electronically, according to the academy.

For their part, patients report increasing difficulty getting a doctor’s appointment.  In 2007, about 35 percent of patients said they could not get an appointment soon enough – up from 23 percent in 1997, according to the nonprofit Center for Studying Health System Change. That problem could worsen as an additional 32 million Americans begin to gain health coverage in 2014 under the new health law.

ZocDoc, which started in New York City in 2007 and entered the Washington, D.C., market earlier this year, also offers its online doctor scheduling in Chicago and Dallas. It’s hoping to  add doctors in Boston, Los Angeles, Houston and Philadelphia. CEO Cyrus Massoumi says he envisions ZocDoc doing for doctor and dentist appointments what opentable.com has done for online restaurant reservations.

Massoumi, a former consultant with McKinsey & Co. and son of a West Palm Beach hand surgeon, says he came up with the idea for the service after his ear drum burst and it took him four days to find a doctor in New York to help him. Funders of the privately held company include Jeff Bezos, CEO of Amazon.com, and The Founders Fund, an early financier of Facebook.

About 40 percent of ZocDoc appointments take place within a day of booking. After an appointment is made online, the doctor’s office confirms it by email and then ZocDoc sends electronic reminders. Nearly 85 percent of appointments made on ZocDoc are new patients.

Patients pay nothing. Doctors pay about $250 a month to be listed. While the company won’t say how many doctors it has signed up, a review of the web site shows it has hundreds of doctors and dentists in each market. 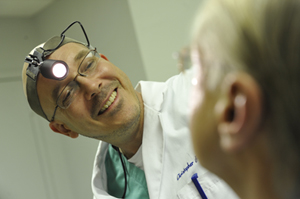 Dr. Christopher Mesick, examines a patient in Washington. More doctors are offering online scheduling thru sites like www.zocdoc.com. Patients can see doctors, appointment calendars and identify those that take their insurance and are conveniently located (Jack Gruber/USA TODAY)

Dr. Roland Goertz, president of the American Academy of Family Physicians, says he sees little downside to allowing patients to book appointments online. “I think any tools that make an office practice more efficient to take care of a large number of patients will be welcome,” he says.

Younger patients, he says, expect services like online scheduling because they are used to using the Internet for most of their consumer needs. In 2011, Goertz plans to add an online scheduling option at his own practice in Waco, Texas, at least for existing patients.

One other company that helps people to schedule appointments online, Health In Reach, started in September but is only marketing the feature to new patients in Los Angeles for now. CEO Scott Sangster says his company is paid only when the doctor gets an appointment. He would not reveal the fee. To reduce the no-show rates, patients must pay at least a portion of their insurance co-payment online ahead of the appointment.

Some well known health systems have moved to online scheduling. Kaiser Permanente, the large integrated health system based in Oakland, Calif., says last year about 5.5 percent of its doctor appointments, or 1.8 million, were booked online.

The Cleveland Clinic has allowed existing and new patients to make online appointment requests for three years. It has just begun a pilot program to allow existing patients to see the available appointments for some doctors. “This is a valuable tool which patients demand today because it adds to the patient experience,” says Dr. Rami Boutros, interim managing director of the Cleveland Clinic. “If it’s 11 at night, patients can check to see if there is an opening tomorrow.”

For physicians, online appointments are good business. Dave Behler, practice administrator at Feldman E.N.T. Group where Clint Morrison was treated, says ZocDoc has brought the 10-doctor practice hundreds of appointments since the service began in February. “Our phone system can be difficult to get through,” he says. “This takes the phone call out of the equation.”