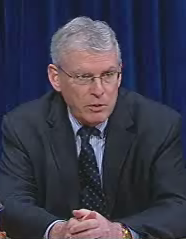 Career Path: Pollack was the dean of the Antioch School of Law and worked on food, consumer and hunger issues before becoming the founding executive director of Families USA in 1982.

Why He’s a Player Now: Families USA is a liberal advocacy group that is pushing hard for a health care overhaul that would provide universal and affordable coverage building on the existing system. It also has a special focus on the needs of low-income individuals.

Read about the other ‘Players‘.