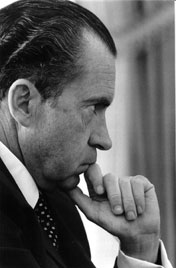 As soaring health care costs threatened to push medical care out of reach for many families, the president offered an ambitious new plan to curb the growth in spending and extend health coverage to every American. But he faced fierce opposition from Capitol Hill.

Sound like the current political wrangling? Well, that was 1974 and the president was Richard M. Nixon. The partisan battles and Democratic infighting that threatens this year’s health reform efforts is reminiscent of the battles dating back to that era, says a veteran of that campaign.

A Reform Montage From The Nixon Era

Nixon’s push to overhaul the health care system was foiled by political and personal scandal, but those events overshadowed an ideological chasm  similar to the dynamics in play now — that may have undermined the effort anyway, according to Stuart Altman, then a deputy assistant secretary in the health department and an author of Nixon’s overhaul plan. More recently, he was a health care adviser to President Barack Obama’s campaign.

Nixon’s plan included an employer mandate, assistance for those who were unable to afford insurance and a number of provisions that are similar to those being advanced today by Obama and congressional Democrats. The employer-based plan included a ceiling on out-of-pocket expenses and eliminated exclusions based on pre-existing conditions. The “Assisted Health Insurance” program would have subsidized coverage based on incomes, replacing Medicaid. Those plans, along with Medicare, would have provided the same protections and benefits to everyone.

Nixon’s Plan For Health Reform, In His Own Words

A competing measure, originally sponsored in 1971 by Sen. Edward Kennedy, D-Mass., would have created a payroll tax-funded national insurance plan. The left-wing of the Democratic Party fortified that position, even as Kennedy in 1974 sought to offer a more centrist proposal with Rep. Wilbur Mills, D-Ark., the powerful chairman of the House Ways and Means Committee. Liberals and conservatives failed to agree on what role government should play in the health care system, leaving stranded centrist lawmakers who backed either Nixon’s plan or the Kennedy-Mills bill.

“Even then, and [still] now, we just don’t have enough moderates to pass anything,” says Altman. The current fight over whether to include a public health insurance plan as part of health reform is just a modern day reenactment of the battle of ’74, he says. Today, about 60 liberal legislators say they won’t vote for a bill without a public health insurance plan, while Republicans and some moderate Democrats reject the measure.

KHN’s Christopher Weaver spoke to Altman, who is now a professor at the Heller School for Social Policy and Management at Brandeis University. He spoke about why health reform failed in the ’70s, and his sense of déjà vu.

Q: How does the 1974 debate over health reform compare to what’s happening today?

A: It was a very interesting period. In the ’70s this was much more inside baseball. Now, we have thousands of people who are involved in health care in Washington from larger congressional and administration staffs to many more people working for every consulting group and every constituency group that it is affected. And, while the public [in the 1970s] learned about it through the newspapers, it was not nearly as vitriolic. I’ve never, even during the Clinton years, seen this level of animosity on both sides. [In the ’70s] it was much more of a battle among [competing reform] plans.

Q: What were the plans?

You had four or five different options. You had the far left, which was the original Kennedy bill [which was backed by the unions]. But then Kennedy himself became much more of a centrist. Then you had the administration bill. It was, in some respects, quite similar to where the Obama administration started out. It had an employer mandate. It had big subsidies for poor people to buy private insurance. It had an extension of Medicaid. And you had a strong push, surprisingly from a Republican administration.

Q: What are the key similarities?

You had a political spectrum that looked a lot like the spectrum today. You had a very strong Democratic Congress, but you had a lot of Southern Democrats who now are all Republicans. [They and the Republicans were] opposed to big government. You had liberal Democrats wanting a variation on single payer, and then you had the moderates backing the administration’s bill, or [the bill introduced by Kennedy and Mills.]

A: It was a combination of personalities and issues. You had three strong supporters for pushing it forward: President Nixon, Sen. Kennedy and the third was Congressman Mills. Nixon resigned. Mills got caught up in personal turmoil with Fanne Fox and he became muted. Mills lost power over his committee and it broke into warring factions, which is a lesson we need to worry about today.

Q: Where do you see the reverberations of that episode now?

A: Everywhere. I think it’s probably no more than 50-50 that we’re going to pass anything today, with the liberals saying they’re not going to support anything that doesn’t have a strong public plan. And the moderates and conservatives say ‘a public plan over my dead body.’ The progressives as much destroyed the [Nixon-era] health reform effort as anybody. This is nothing new. If you have the liberals and conservatives saying, “We’re not going to do this,” . . . we just don’t have enough moderates to pass anything. This is far from over. And you can wind up with nothing.

Q: Where do you stand now?

A: I’m generally in favor of what the president is trying to do, although I think the public plan has become a gigantic distraction, and it’s unnecessary, and it could lead to the whole thing falling apart. In the original Obama plan, it was very limited plan, but it’s become the holy grail of the progressives. And, it’s also fed the extreme right to allow them to talk about a government takeover. They’re just totally blowing it out of proportion, but it’s just enough for them to say they’re right. I would drop the public plan in a heartbeat.