This story is part of a partnership that includes Wisconsin Watch, Wisconsin Public Radio, NPR and Kaiser Health News.

Dr. Angela Gatzke-Plamann didn’t fully grasp her community’s opioid crisis until one desperate patient called on a Friday afternoon in 2016.

“He was in complete crisis because he was admitting to me that he had lost control of his use of opioids,” recalled Gatzke-Plamann.

The patient had used opioids for several years for what Gatzke-Plamann called “a very painful condition.” But a urine screening one week earlier had revealed heroin and morphine in his system as well. He denied any misuse that day. Now he was not only admitting it, but asking for help.

Gatzke-Plamann is the only full-time family physician in the central Wisconsin village of Necedah, population 916. She wanted to help but had no resources to offer. She and the patient started searching the Internet while still on the phone, trying to find somewhere nearby that could help with addiction treatment. No luck.

Here was a patient with a family and job who had spiraled into addiction because of doctor-prescribed pain pills, yet the community’s bare-bones health system left him on his own to find treatment — which he later did, 65 miles away. If that situation was going to change in Necedah, it was up to Gatzke-Plamann.

“That weekend I went home and I said, ‘I’ve got to do something different,'” she recalled.

In many ways, rural communities like Necedah have become the face of the nation’s opioid epidemic. Drug overdose deaths are more common by population size in rural areas than in urban ones. Amid a nationwide decline in prescribing rates since 2012, rural doctors prescribe opioids more often by far. Rural Americans have fewer alternatives to treat their very real pain, and they disproportionately lack access to effective addiction medication such as buprenorphine.

It used to be rare for primary care physicians outside big cities to take on the challenges of opioid misuse, according to Dr. Erin Krebs, a professor of medicine at the University of Minnesota who researches chronic pain management. Now, Krebs said, it’s becoming increasingly common “out of necessity.”

“We just have a lot of people who need this kind of care, and they need it where they are,” Krebs said.

Both pain management and addiction treatment are specialties, calling for advanced training that many family physicians don’t have. Specialists tend to practice in larger towns and cities, said Dr. Alan Schwartzstein, speaker of the American Academy of Family Physicians Congress of Delegates, “so they’re not as accessible.”

For rural physicians, the burden of responding to the opioid epidemic falls squarely on their already loaded shoulders. And for Gatzke-Plamann, there was no question that she wanted to rise to the challenge. 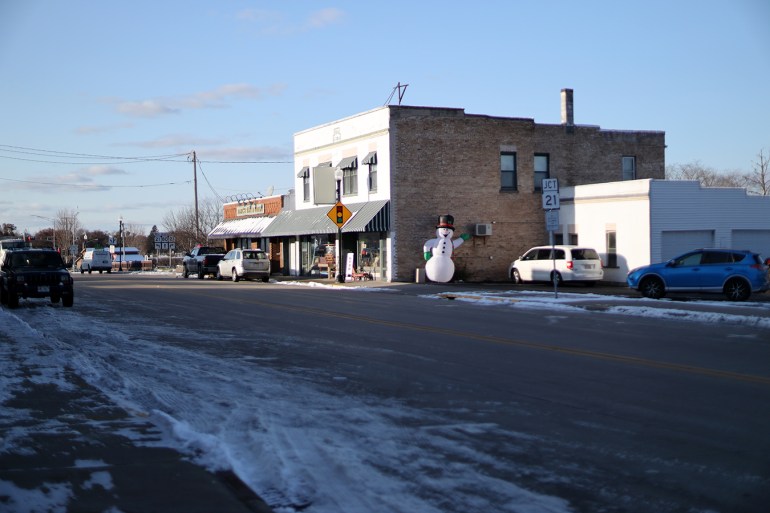 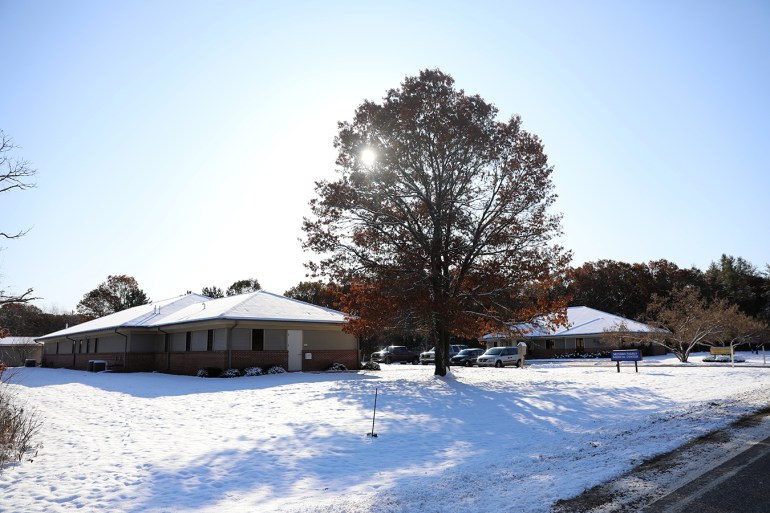 When Gatzke-Plamann came to Necedah in 2010, U.S. opioid prescriptions were peaking. She estimates she inherited 25 to 30 patients with monthly opioid prescriptions. Soon she, like many of her peers around the country, noticed a rise in overdose and misuse.

Around 2012, she stopped taking on new patients using chronic opioid medications to focus on current opioid patients. She weaned many off opioids and tracked how many pills she prescribed for acute issues, like surgeries. Instead of defaulting to prescribing a month’s worth of pills for a patient who underwent a cesarean section, for example, she might prescribe only three to five pills.

“Most of the time those patients really only have that much pain for a couple of days,” Gatzke-Plamann said. “We don’t need to have those pain medications sitting in their medicine cabinets.”

Today, the hospital Gatzke-Plamann is affiliated with sends her a monthly report of how many of her patients have opioid prescriptions. It varies each month, she said, but usually ranges from seven to 10.

For 62-year-old Necedah resident Michael Kruchten, the chronic pain he suffers stems from chemotherapy and radiation therapy treatments he received for lung cancer in 2011.

Kruchten is cancer-free now, but the treatments left him with permanent and severe nerve damage in his hands and feet.

The pain was so bad he had to stop working at the ethanol plant in Necedah. Daily chores became challenging. The pain would keep him awake at night, leaving him pounding his pillow in frustration. 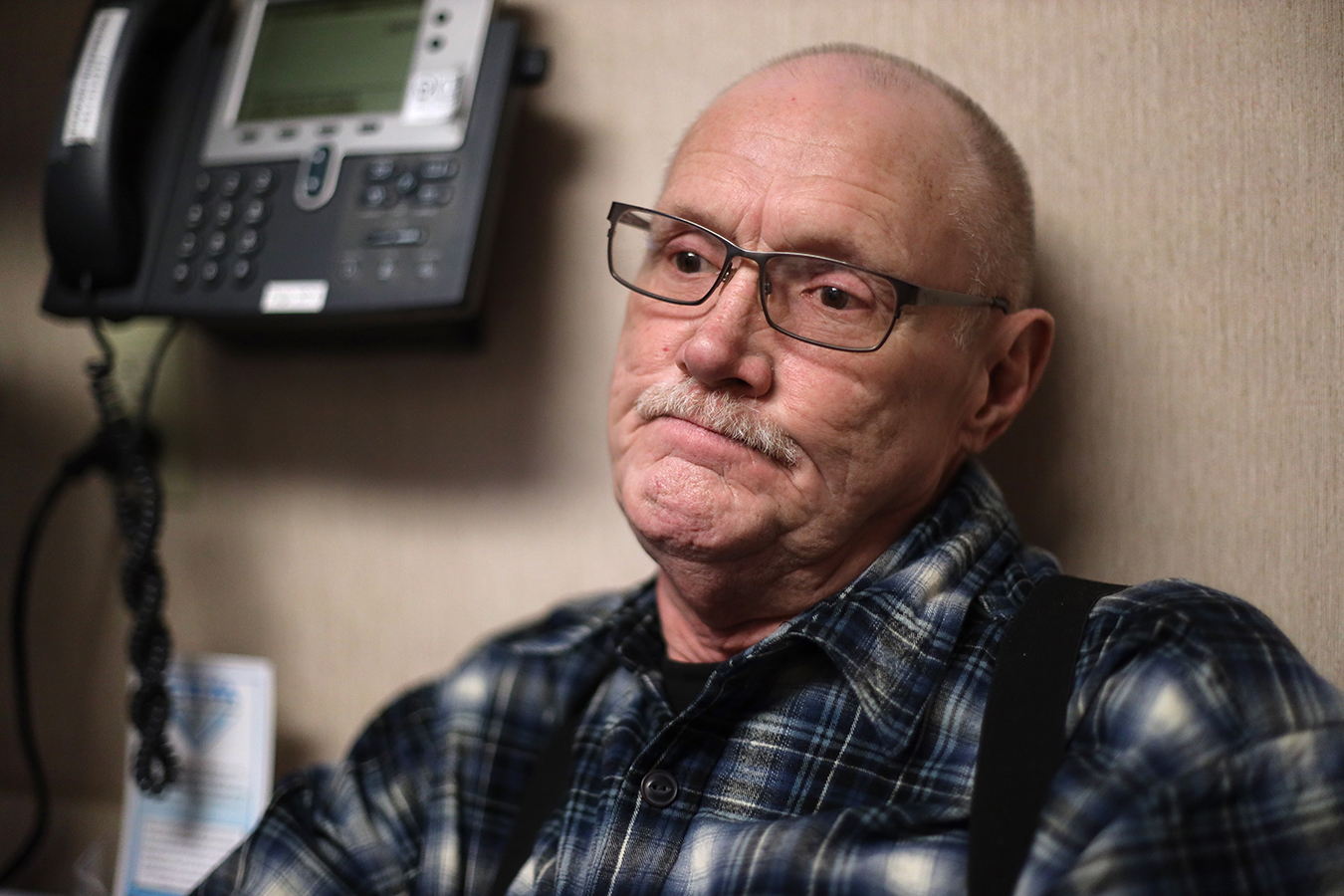 Michael Kruchten, a patient of Gatzke-Plamann, takes prescription opioids for chronic pain. “Dr. Gatzke has been a big plus and incentive for me. … She’s one of the main factors why I’m still here. She pulled me through it,” he says.(Coburn Dukehart/Wisconsin Watch)

One reason there are more opioid prescriptions in the rural United States is that Americans living in those areas report more chronic pain. Rural communities skew older, meaning they disproportionately deal with painful conditions related to aging, such as arthritis. Injuries also appear to be more common in communities more dependent on physically demanding jobs, such as mining and logging.

For patients with chronic pain like Kruchten, Gatzke-Plamann tries to avoid prescribing opioids when she can, but alternatives are limited. Though evidence shows that physical therapy, exercise, psychotherapy or some combination of these techniques can help reduce the need for opioids, it’s not easy to get these treatments. The nearest physical therapy is in Mauston, a 17-mile drive south. Treatments such as cognitive therapy for pain require drives to Madison, Marshfield or La Crosse, each at least an hour away.

She first tried prescribing Kruchten two non-opioid medicines: gabapentin and then duloxetine. Neither helped enough. Eventually, she prescribed the opioid hydrocodone, finally allowing him to sleep.

“Without the sleep, I was a couch potato,” Kruchten said. “Once I started to get to sleep [at night], I got rid of my TV and the couch and started becoming more active.”

Gatzke-Plamann’s efforts to carefully manage opioid use with chronic pain patients is supported by other efforts in the community.

Around 2016, Mile Bluff Medical Center — the hospital in Mauston with which Gatzke-Plamann is affiliated — standardized a medication treatment agreement with patients, laying out rules for opioid prescriptions.

Patients such as Michael Kruchten must agree to stipulations before getting a new prescription. That includes getting pills from only one doctor and filling prescriptions at just one pharmacy while also submitting to random pill counts and urine screenings. Kruchten is something of a model patient in that regard, according to Gatzke-Plamann.

“You come in for appointments regularly and you’re always on time and you’re respectful with the staff,” she told him as they reviewed the contract at an appointment in November. 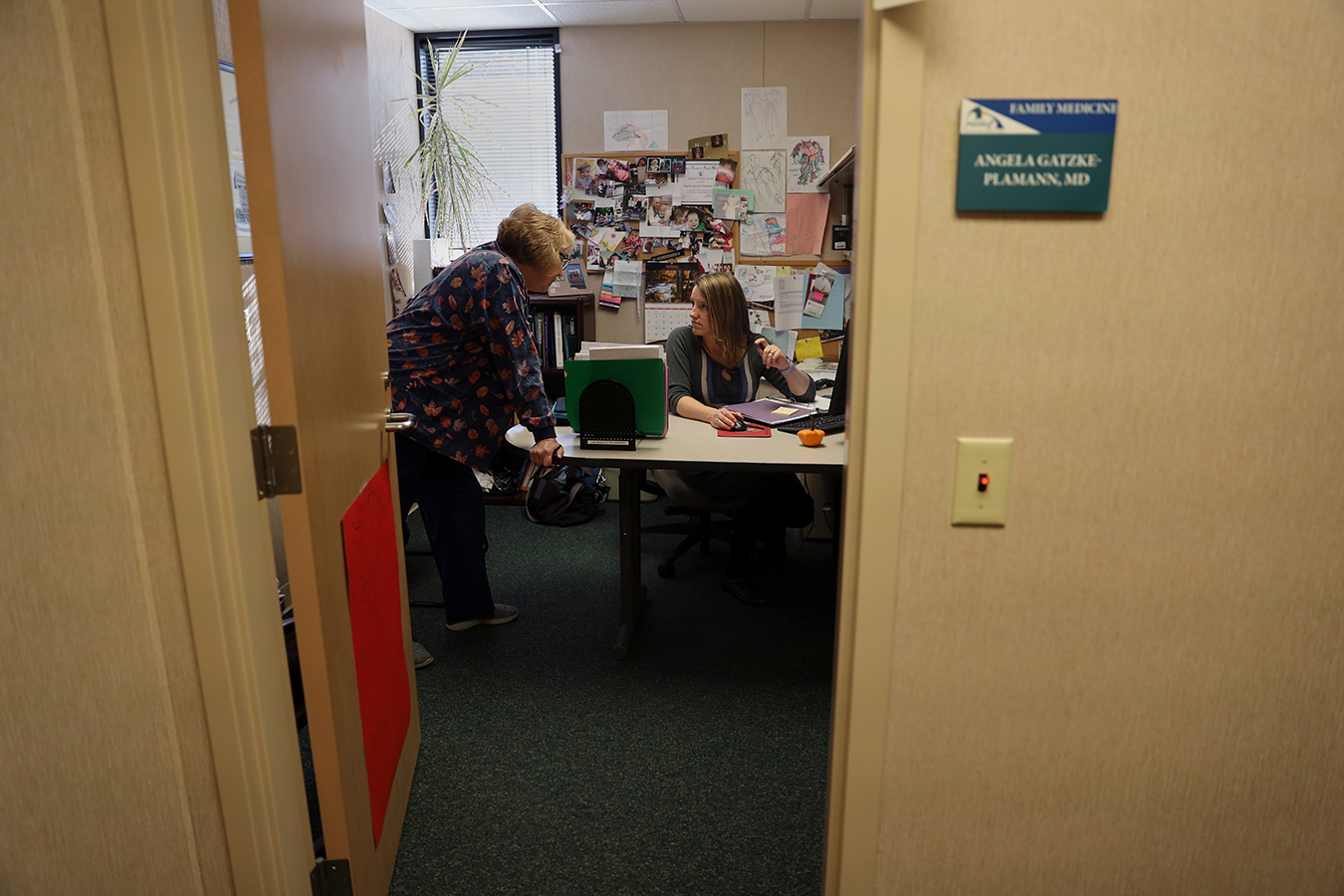 Gatzke-Plamann in her office at the Necedah Family Medical Center with medical assistant Laurie Kenke. She says it’s challenging to make room for a buprenorphine practice as well as a family practice, but she considers it an important responsibility for her community. “There isn’t another me just down the road. I’m the only one here. So if I can fulfill that need, then I should do that.”(Coburn Dukehart/Wisconsin Watch)

Gatzke-Plamann can stop prescribing opioids to patients who violate the agreement. But the contracts aim less to punish than to keep communication open. Reviewing the contract with a patient allows them to revisit the risks and warning signs of addiction.

On his recent visit, Kruchten told the doctor he took only one hydrocodone pill instead of his usual two the previous night, saying it was “satisfactory” in curbing the pain.

“And that’s good that you don’t take it to just put yourself to sleep,” Gatzke-Plamann said. “Because it’s not a sleep medicine. You understand that. We’ve talked about that one before.”

The Friday call for help in 2016 made Gatzke-Plamann realize Necedah was missing a crucial resource in solving the pain puzzle: addiction treatment.

“We don’t have as many resources here,” Gatzke-Plamann said of the surrounding Juneau County, one of the poorest and least healthy in the state. “When I see that there’s a need for something, it’s on me to do something about that.”

She said that’s why she decided to get the required training to prescribe the addiction medicine buprenorphine.

Research shows buprenorphine effectively treats addiction, but the medicine is particularly scarce in rural America. More than 10 million rural Americans — more than one-fifth of the country’s rural population — live in counties without a single clinician licensed to prescribe the drug. (The rural-urban disparity in access has, however, shrunk since 2017.)

In Wisconsin, 18 of 72 counties lack a buprenorphine provider, and 14 of those unserved counties are rural.

Gatzke-Plamann is one of only two people in Juneau County licensed to prescribe buprenorphine. The other is a physician assistant she supervises. 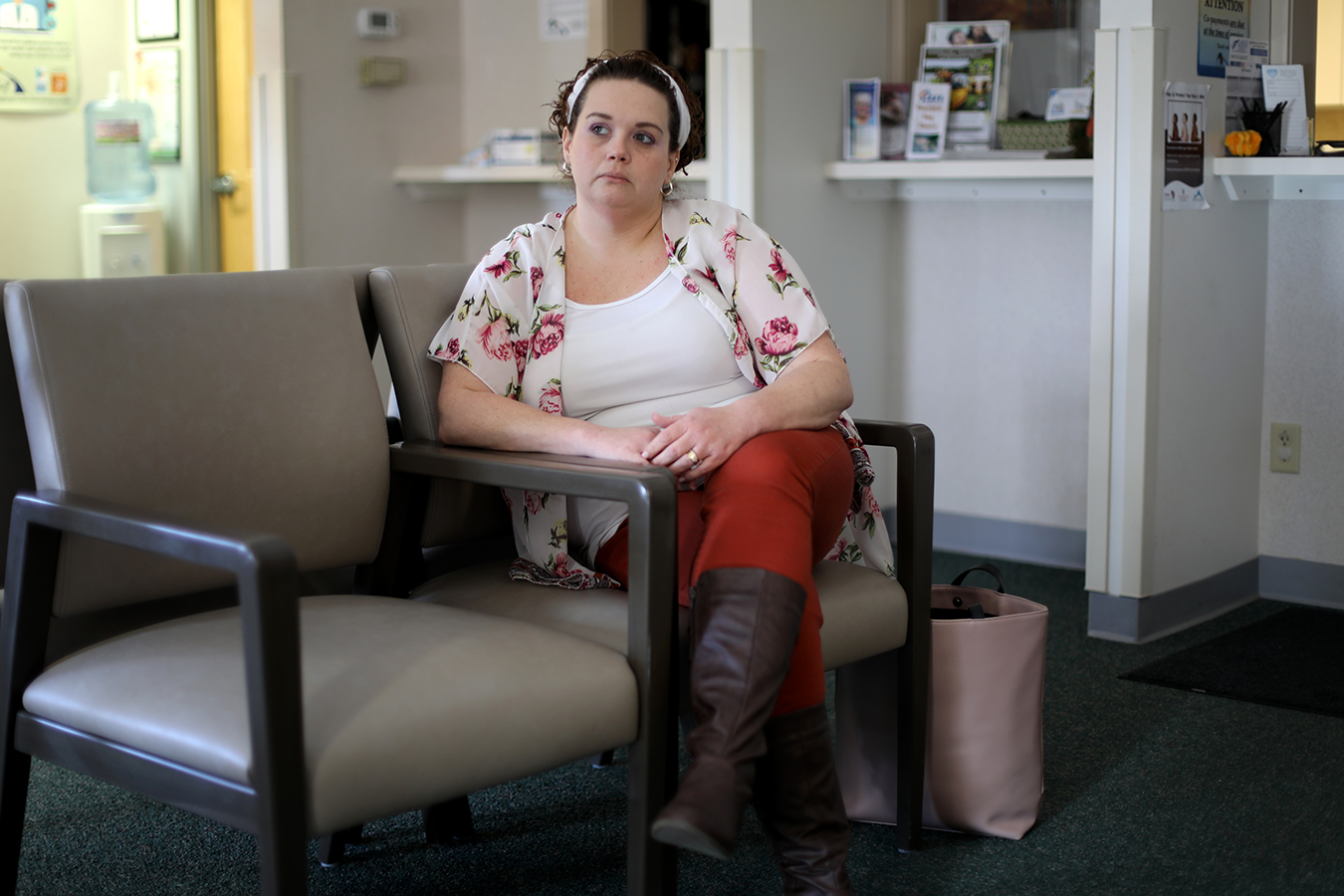 Catina Stoflet has been prescribed the addiction medicine buprenorphine for seven months, being supervised by Gatzke-Plamann. “I probably would have died of a heroin overdose if I didn’t do this program. It’s changed my life,” says Stoflet.(Coburn Dukehart/Wisconsin Watch)

Catina Stoflet is among the buprenorphine patients who benefit.

Stoflet, 35, got addicted to prescription opioids as a 16-year-old in 2001, during the first wave of the nation’s opioid epidemic. She started getting kidney stones in high school. She’s had many surgeries to remove the painful obstructions.

That first prescription was for Tylenol 3, a combination of acetaminophen and the opioid codeine. Doctors soon escalated her to stronger drugs: Vicodin, Percocet, oxycodone.

“It was right around the time that people didn’t know what [opioids were] doing to you,” Stoflet said.

Stoflet said she spent years in recovery beginning in 2007. But she relapsed in 2014, progressing to heroin and methamphetamine. Last year, she decided to quit for good. Stoflet said her primary care doctor introduced her to Gatzke-Plamann, who had recently begun prescribing buprenorphine.

Just like Gatzke-Plamann’s opioid patients, buprenorphine patients must sign contracts, agreeing to participate in a treatment program that includes counseling.

Stoflet works with a counselor and community recovery specialist at the Roche-A-Cri Recovery Center in Friendship, about 20 miles from Necedah. The center opened in September 2018. Without its additional resources, Gatzke-Plamann said, she would not feel comfortable prescribing buprenorphine.

Doctors like Gatzke-Plamann have an important role to play in the opioid crisis by treating patients where they live, said Erin Krebs of the University of Minnesota. But, she added, funding models don’t always encourage this kind of work.

“I’m not sure we’ve done all we can do to really support small practices taking on this effort,” said Krebs. “There’s hope for people with opioid problems, and we have treatments that work. And so I think the more we can hear about clinicians who are tackling these problems in their own communities and having success the better.”

This story is part of a partnership that includes Wisconsin Watch, Wisconsin Public Radio, NPR and Kaiser Health News.