In 2012, Parkview Healthcare Center’s history of safety violations led California regulators to issue an ultimatum reserved for the most dangerous nursing homes.

The state’s public health department designated Parkview, a Bakersfield, Calif., nursing home, a “special focus facility,” requiring it to either fix lapses in care while under increased inspections or be stripped of federal funding by Medicare and Medicaid — a financial deprivation few homes can survive. After 15 months of scrutiny, the regulators deemed Parkview improved and released it from extra oversight.

But a few months later, Elaine Fisher, a 74-year-old who had lost the use of her legs after a stroke, slid out of her wheelchair at Parkview. Afterward, the nursing home promised to place a nonskid pad on her chair but did not, inspectors later found. Twice more, Fisher slipped from her wheelchair, fracturing her hip the final time.

While special focus status is one of the federal government’s strictest forms of oversight, nursing homes that were forced to undergo such scrutiny often slide back into providing dangerous care, according to a Kaiser Health News analysis of federal health inspection data. Of 528 nursing homes that graduated from special focus status before 2014 and are still operating, slightly more than half — 52 percent — have since harmed patients or put patients in serious jeopardy within the past three years.

These nursing homes are in 46 states. Some gave patients the wrong medications, failed to protect them from violent or bullying residents and staff members, or neglected to tell families or physicians about injuries, inspection records show. Years after regulators conferred clean bills of health, levels of registered nurses tend to remain lower than at other facilities.

Yet, despite recurrences of patient harm, nursing homes are rarely denied Medicare and Medicaid reimbursement. Consequences can be dire for patients like Fisher. 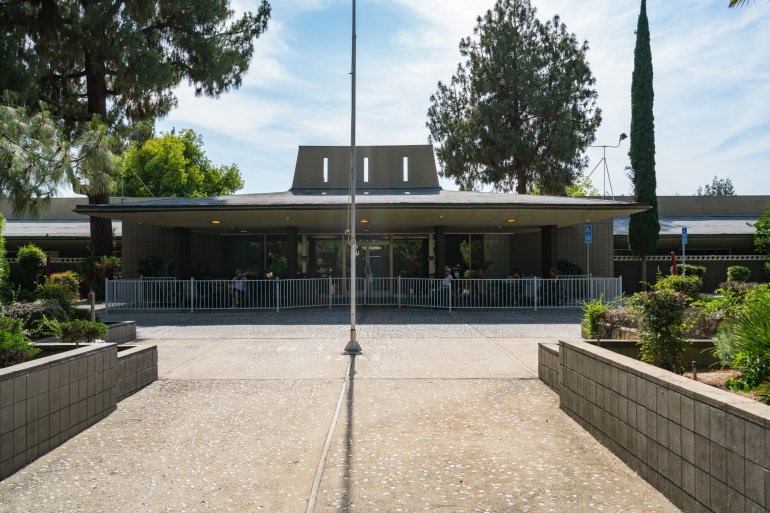 The Parkview Healthcare Center in Bakersfield, Calif., has a history of safety violations, including one involving Fisher. (Brian P. Hall for The New York Times)

“She used to go to bingo every day and she was very involved in the nursing home,” said her son-in-law, Eric Powers. He said that although Fisher moved to a different nursing home for better care, “after this whole thing, she has to be on painkillers. She’s mainly in her room all the time. It’s the saddest thing in the world.”

Parkview’s owner at the time of the violations, LifeHouse Health Services, did not respond to requests for comment. Dr. David Silver, who purchased Parkview last fall, said he had replaced top management and staff members who resisted a new approach.

“We were not happy with the level of patient care,” he said.

“When you’re looking at these large corporations, that’s just the cost of doing business,” said Neil Gehlawat, who is representing Fisher in her pending lawsuit against Parkview. “It doesn’t have the effect of changing behavior.”

‘Worst Of The Worst’

The Centers for Medicare & Medicaid Services, or CMS, sets the federal standards for nursing homes and determines whether they are in compliance, based on inspections performed primarily by state health departments. States license facilities and have the authority to revoke the licenses.

Special focus facility status is reserved for the poorest-performing facilities out of more than 15,000 skilled nursing homes. The federal government assigns each state a set number of slots, roughly based on the number of nursing homes. Then state health regulators pick which nursing homes to include.

More than 900 facilities have been placed on the watch list since 2005. But the number of nursing homes under special focus at any given time has dropped by nearly half since 2012, because of federal budget cuts negotiated by President Barack Obama and Congress. This year, the $2.6 million budget allows only 88 nursing homes to receive the designation, though regulators identified 435 as warranting scrutiny. California and Texas each has six slots, the most of any state. Twenty-nine states have just one.

Especially troubling is that more than a third of operating nursing facilities that graduated from the watch list before 2014 still hold the lowest possible Medicare rating for health and safety: one star of five, KHN’s analysis found.

“You have this recidivism of nursing homes that are special focus facilities,” said Richard Mollot, executive director of the Long Term Care Community Coalition, an advocacy group in Manhattan. “These are the worst of the worst and they’re back?”

CMS defended the program, saying that nursing homes on the watch list showed more improvement than did comparably struggling facilities not selected for enhanced supervision. “CMS continues to work to improve oversight to prevent any facility from regressing in performance,” the statement said. 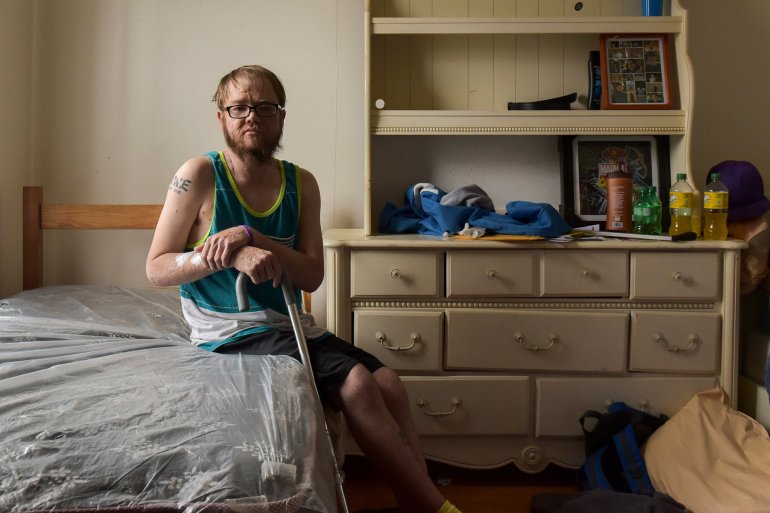 Andrew Edwards is among the patients who were harmed by nursing homes that had earlier been given a clean bill of health by Medicare and health regulators. (Doug Kapustin for KHN)

Special scrutiny was lifted for about one-fourth of the nursing homes in less than a year. Facilities need to pass only two consecutive inspections without major violations or substantiated complaints.

“The period of time is just not long enough for them to show that they can sustain improvement,” said Robyn Grant, director for public policy at the National Consumer Voice for Quality Long-Term Care in Washington. “There needs to be some significant changes in the program.”

In 2010, NMS Healthcare of Hagerstown, Md., left the watch list after 10 months.

Last year, Maryland’s attorney general sued the facility and its owner, Neiswanger Management Services, alleging that they evicted frail, infirm and mentally disabled residents “with brutal indifference” when their health coverage ran out or the facility had the opportunity to get someone with better insurance.

Among those was Andrew Edwards, who was told by NMS that he was being discharged to an assisted-living center, according to the lawsuit. Instead, in January 2016, the staff sent him to a crowded, unlicensed Baltimore City row house where the owner confiscated his bank card and withdrew $966 over his objections, the lawsuit said. Although NMS said it had arranged for his outpatient kidney dialysis, “that was false,” Edwards said in an interview. He ended up in an emergency room after he missed his treatment.

NMS maintains it stopped referring patients to that owner when told of the conditions. This month, CMS expelled the Hagerstown nursing home from Medicare and Medicaid after citing it for more violations. The company is closing the facility. NMS, which still runs other homes in Maryland, has sued state regulators, claiming they are vindictively trying to drive the chain out of business.

Some nursing homes on the watch list do maintain improvements. After Evergreen Nursing Home in southern Alabama was designated a special focus facility in 2005, the owners brought in new managers and added nursing supervisors, said Kimberly Bush, the facility’s administrator.

Medicare now rates Evergreen a five-star facility. “I’d like to say there’s some kind of magic recipe to this, but it’s just doing the job and holding people accountable,” Bush said.

But even prolonged supervision does not guarantee progress. Poplar Point Health and Rehabilitation in Memphis stayed on the watch list for 2½ years until 2009. A federal lawsuit brought last year claims that Poplar and its owner, Vanguard Healthcare, regularly provided “nonexistent, grossly substandard, worthless care” as far back as 2010. Vanguard, now in bankruptcy court, declined to comment.

The ultimate enforcement threats are termination from Medicare and Medicaid or closure by state or federal authorities. But only 17 percent of former special focus facilities are no longer operating, and that can include ones that went out of business for unrelated reasons, KHN found.

State regulators are reluctant to close nursing homes because of the upheaval it causes patients and families. In some areas, there are no alternative facilities nearby, making termination even less appealing.

“At the end of the day, there are those centers that cannot be corrected, can’t fix themselves, and the best thing for the patients and the residents might be for them to move to another location,” said Lyn Bentley, an executive at the American Health Care Association, a nursing facility trade group. But, she said, “it’s always difficult to close someone’s home.”

Too few nurses, particularly registered nurses, provide care at some of the most troubled homes, KHN’s analysis shows. Registered nurse staffing was still 12 percent lower than at other facilities, even three years after the homes were released from the watch list.

In 2009, Pennsylvania health regulators released Golden LivingCenter-West Shore in Camp Hill after 17 months of supervision. The company said in a recent statement that when a home was put on that list, “we mobilize the resources necessary to help get that LivingCenter back into compliance.”

But data from Medicare’s Nursing Home Compare website show the facility has among the worst nurse-to-patient staffing ratios in the nation, with registered nurses devoting an average of 12 minutes for each patient daily. The state average is 58 minutes daily per patient.

Golden LivingCenter-West Shore was fined $59,150 in 2015 after being cited for, among other violations, allowing a resident’s feeding tube to become infested with maggots, records show. Also, Golden Living agreed to pay $750,000 to settle three cases involving patient injuries from falls that occurred after extra oversight ended, court records show.

Priority is following a common strategy for shedding an unwanted reputation: changing the facility’s name. In California, Parkview — where Fisher slipped out of her wheelchair — is being rebranded too, as Kingston Healthcare Center.

Half The Time, Nursing Homes Scrutinized On Safety By Medicare Are Still Treacherous