Tattoo artist Eric Catalano performs an areola tattoo procedure on Terri Battista’s breasts at Eternal Ink Tattoo Studio in Hecker, Illinois, in November. After a double mastectomy following cancer in 2013, Battista had reconstructive surgery ― but held off on areola tattoos because of the cost. Then she heard about Catalano’s shop, where breast cancer survivors could get the procedure done for free.(Michael B. Thomas for KHN)

HECKER, Ill. — The first fingernail tattoo started off as a joke by a man who lost the tips of two fingers in a construction accident in 2018.

But that shifted after Eric Catalano, an auto finance manager turned tattoo artist, finished with his needle.

“The mood changed in here,” Catalano recalled as he stood in his Eternal Ink Tattoo Studio. “Everything turned from funny to wow.”

When Catalano posted a photo of the inked fingernails online last January, he thought maybe 300 people would like the realistic tattoo. He had no idea the image would be viewed by millions of people around the world. Even “Ripley’s Believe It or Not!” tracked him down to feature the viral tattoo: a pair of fingernails that looked so real no one could believe their eyes.

The viral photo pushed Catalano, 39, further into the world of paramedical tattooing. Now people with life-altering scars come from as far as Ireland to visit Catalano’s tattoo shop in this rural village about 30 miles outside St. Louis. They enter Eternal Ink looking for the healing touch they saw online. With flesh-toned ink and a needle, Catalano makes his clients feel whole again with an art form and industry that picks up where doctors leave off. 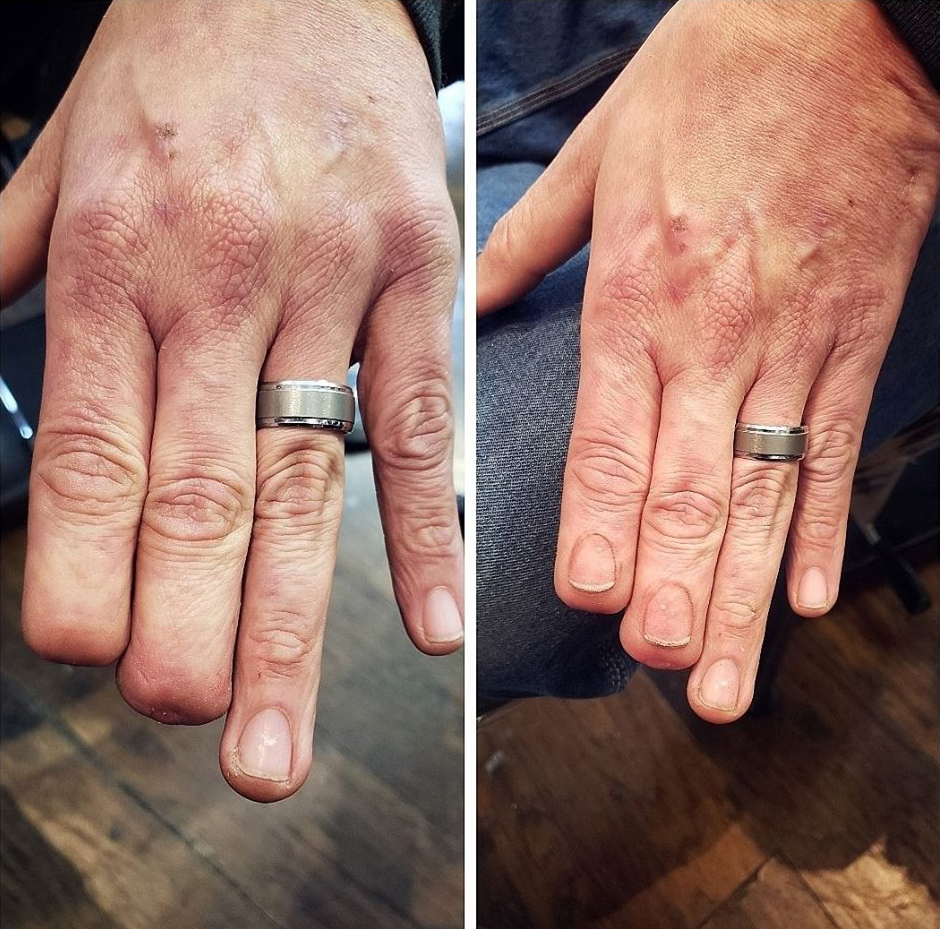 Mark Bertram lost the tips of two fingers in a construction accident last year. Bertram was trapped in a fan belt at work when the tips of his fingers were severed off. Eric Catalano tattooed fingernails for Bertram.(Courtesy of Eric Catalano)

Catalano is known for his talent with intricate fingernails and filling in the blanks left empty by accidents or surgeries, but other paramedical tattoo artists also are trying out flesh-toned pigments to camouflage imperfections, scars and discolorations for all skin colors.

Using tattoos to blend in rather than stand out is a relatively new field. A school started outside Atlanta about four years ago has trained more than 100 aspiring paramedical tattoo artists.

Because the work is considered cosmetic, though, it typically isn’t covered by medical insurance. Still, the mostly unregulated industry continues to grow even as health care professionals debate the safety of tattoo ink. Many people are willing to pay out-of-pocket for that final piece of healing.

Leslie Pollan, 32, a stay-at-home mom and dog breeder in Oxford, Mississippi, feels this service is priceless. She was bitten on the face by a puppy in 2014. She underwent countless surgeries to correct a scar on her lip.

“I went to plastic surgeons that were supposed to be the best in Memphis,” Pollan said. “They gave me no hope, so I started looking for other options.”

She ultimately traveled six hours for a paramedical tattoo session with Catalano. He used ink and his tattoo needle to camouflage Pollan’s lip scar, giving her back a piece of her confidence.

“You don’t understand until you’ve been through it,” Pollan said. “It really made me have a different outlook on life.” 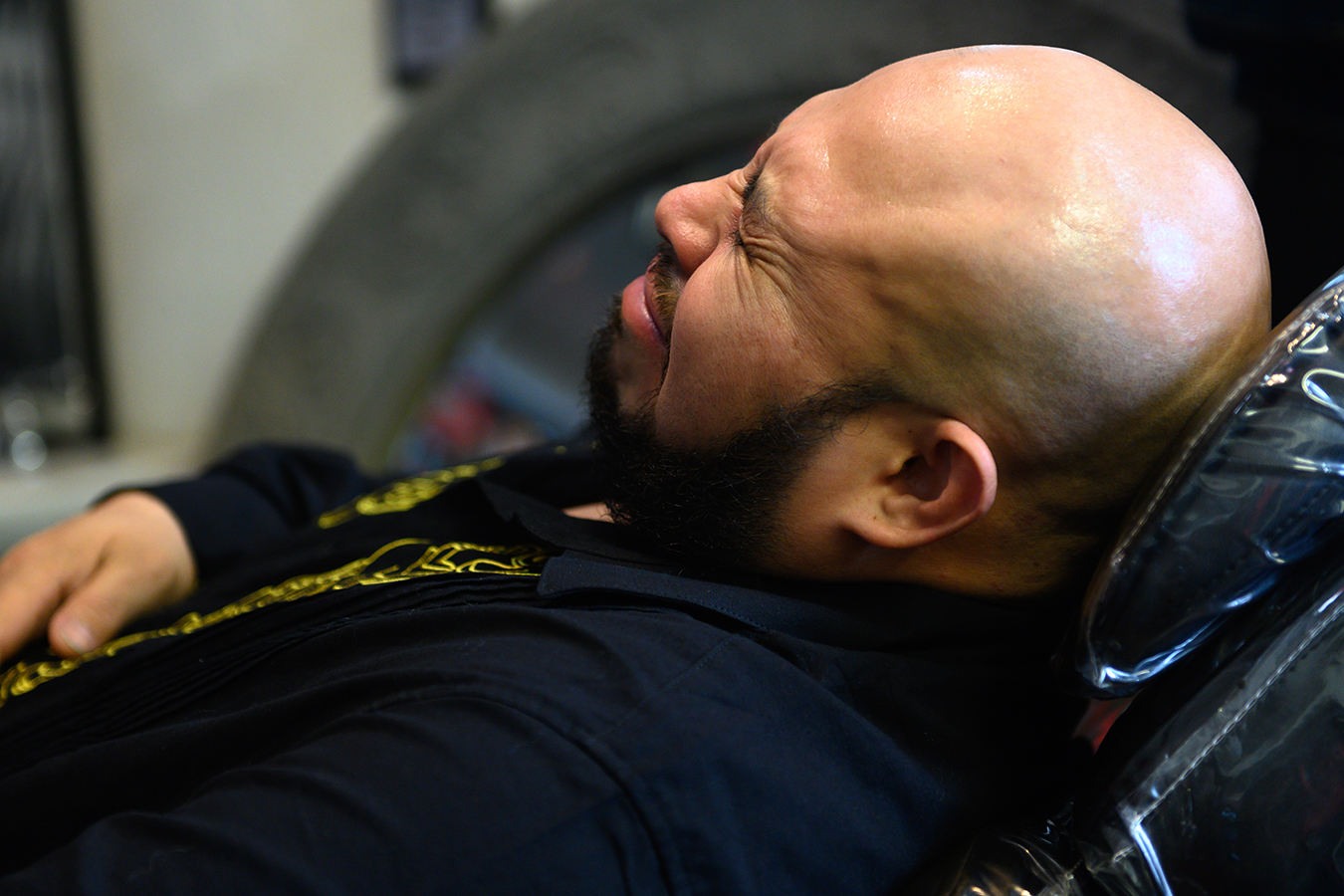 José Alvarado, of Pingree Grove, Illinois, winces while getting two fingernail tattoos at Eric Catalano’s studio in Hecker, Illinois, in November.(Michael B. Thomas for KHN)

More than 500 miles from Catalano’s shop, industry expert and paramedical tattoo trainer Feleshia Sams, 41, shows artists and health professionals how to cover stretch marks, surgery scars and discolored skin with flesh-toned pigment in the course she launched at the Academy of Advanced Cosmetics in Alpharetta, Georgia.

While a tattoo license is required for such work, separate paramedical tattoo training is not.

Catalano is self-taught. He uses the techniques he picked up years ago while helping breast cancer survivors who wanted tattoos of areolas — the dark area around nipples — after having mastectomies. Those tattoos are among the most common paramedical requests.

His grandmother had breast cancer. Her battle with the disease is one reason Catalano is so dedicated to helping those with the diagnosis. 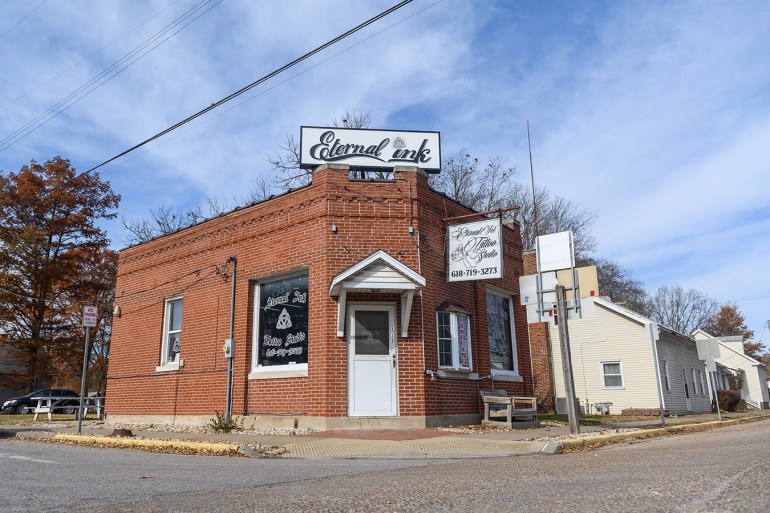 People with life-altering scars come from as far away as Ireland to visit Eric Catalano’s small tattoo shop, Eternal Ink Tattoo Studio, in Hecker, Illinois, about 30 miles outside St. Louis. (Michael B. Thomas for KHN) 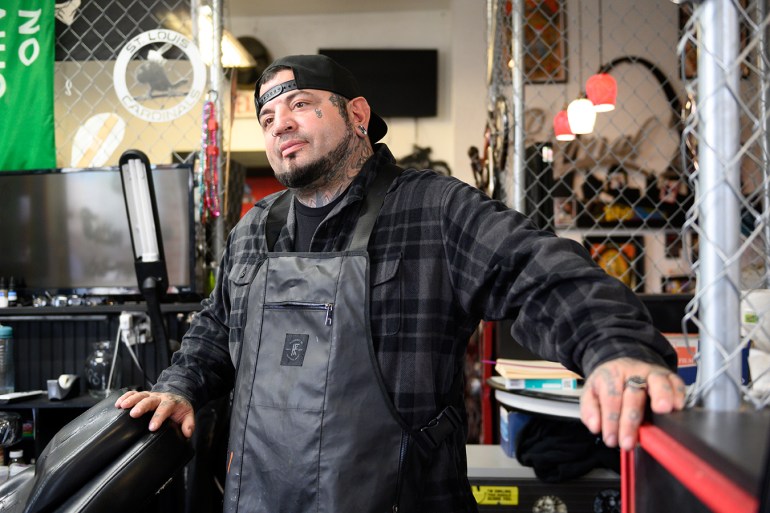 Eric Catalano, an auto finance manager turned tattoo artist, specializes in the art of healing. The single father of three performs up to eight reconstructive medical tattoos for free each “Wellness Wednesday” in his small Illinois shop, drawing in nails on finger amputees, mocking up belly buttons after tummy tucks or fleshing out lips on a woman mauled by a dog.(Michael B. Thomas for KHN)

“Cancer took away a part of my body I can never get back,” said Sarah Penberthy, a breast cancer survivor who came from Festus, Missouri, for areola tattoos. “I felt like I wasn’t even human.”

Penberthy, 39, said she was grateful for her life but still felt incomplete until Catalano stepped in. He tattooed nipples and a creative design of a ship’s anchor on her chest that says “I REFUSE TO SINK.”

Catalano now does up to eight reconstructive tattoos each “Wellness Wednesday,” drawing in nail beds on finger amputees and mocking up belly buttons after tummy tucks.

Catalano doesn’t charge for paramedical tattoos. A GoFundMe page established last year brought in more than $12,000, allowing Catalano to donate his skills for the time being.

“Financially it doesn’t make sense, but it’s just something that I love to do,” Catalano said.

But the single father of three will need more to keep things going. He wants to find other ways to fund his work. 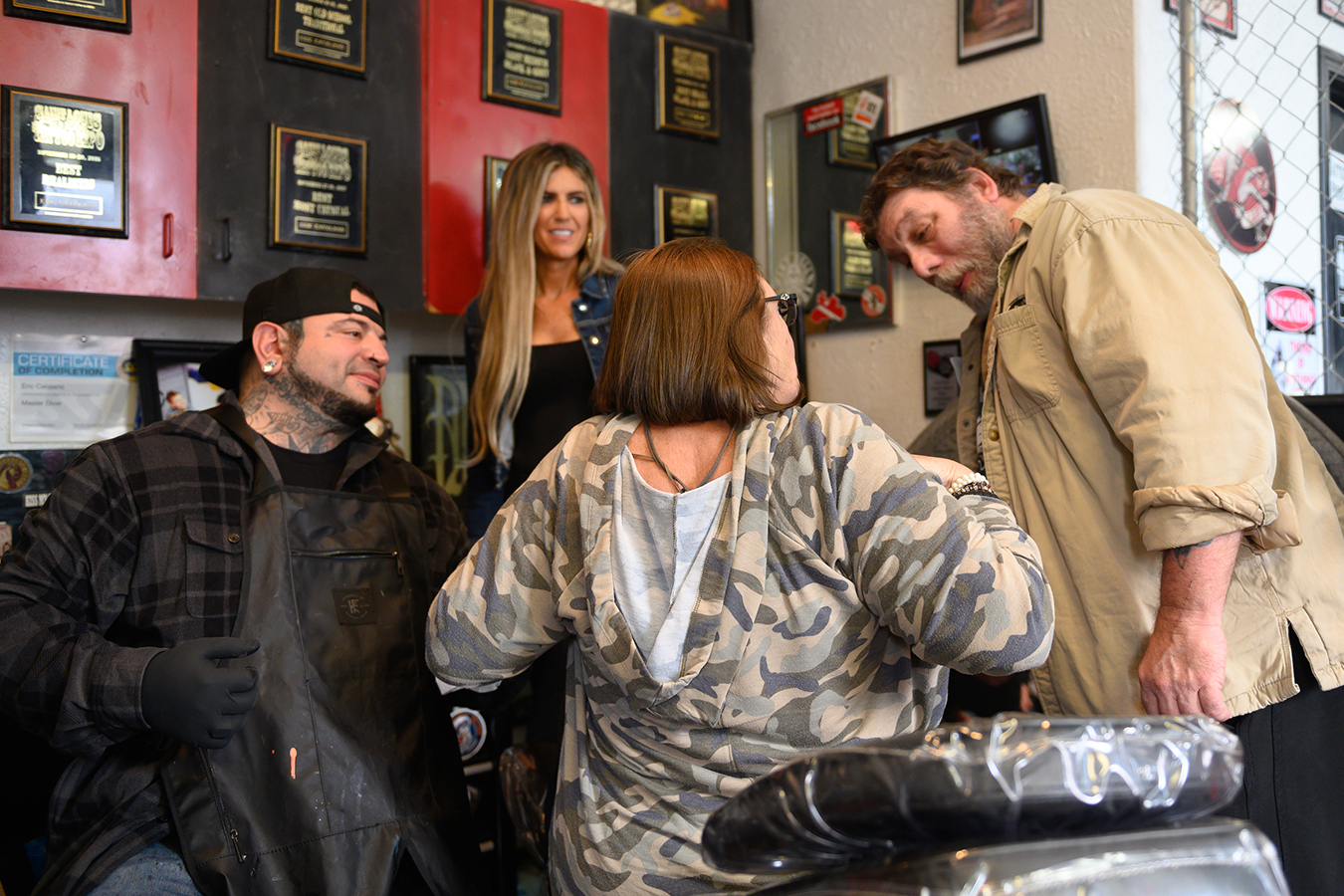 Terri Battista, of Myrtle Beach, South Carolina, shows her completed tattoos to her husband, Joe Battista. After a double mastectomy following cancer in 2013, Battista had reconstructive surgery ― but held off on areola tattoos because of the cost. Then she heard about Catalano’s shop, where, as a breast cancer survivor, she could get the procedure done for free.(Michael B. Thomas for KHN)

Elsewhere, the business of paramedical tattoos is supported by the booming interest in cosmetic and plastic surgery, Sams said. Americans spent more than $16.5 billion on cosmetic procedures in 2018. After tummy tucks, breast augmentations and other procedures, some patients want to cover their scars.

“It’s going to take off even more so than what we’ve seen in the past,” said Sams. “We’re providing students with a nontraditional way to make a career.”

She added that one of her graduates reports a six-figure salary after establishing a business of her own.

Every time I see that emotion, I’m 100% sure this is something that I can’t stop doing.

Catalano’s first fingernail client, Mark Bertram, 46, lost the tips of two fingers at work when his hand became trapped in a fan belt.

“It’s life-changing but it’s not life-ending,” Bertram said. “Doing work is harder now. Everything is just a little different.”

He can’t tie his shoes with ease, type on a keyboard or hold food the same way anymore. But after two surgeries and occupational therapy, he decided to make light of his new condition by asking Catalano to create the fingernail tattoo. The idea made everyone in the studio laugh until they saw the final result.

Bertram has returned to the shop for a touch-up. The maintenance helps his nails keep their realistic look. The ink in fingernail tattoos, however, doesn’t always absorb into the scar-tissued skin.

The two fingernail tattoos that José Alvarado, 44, of Pingree Grove, Illinois, got from Catalano in November wore off within weeks. 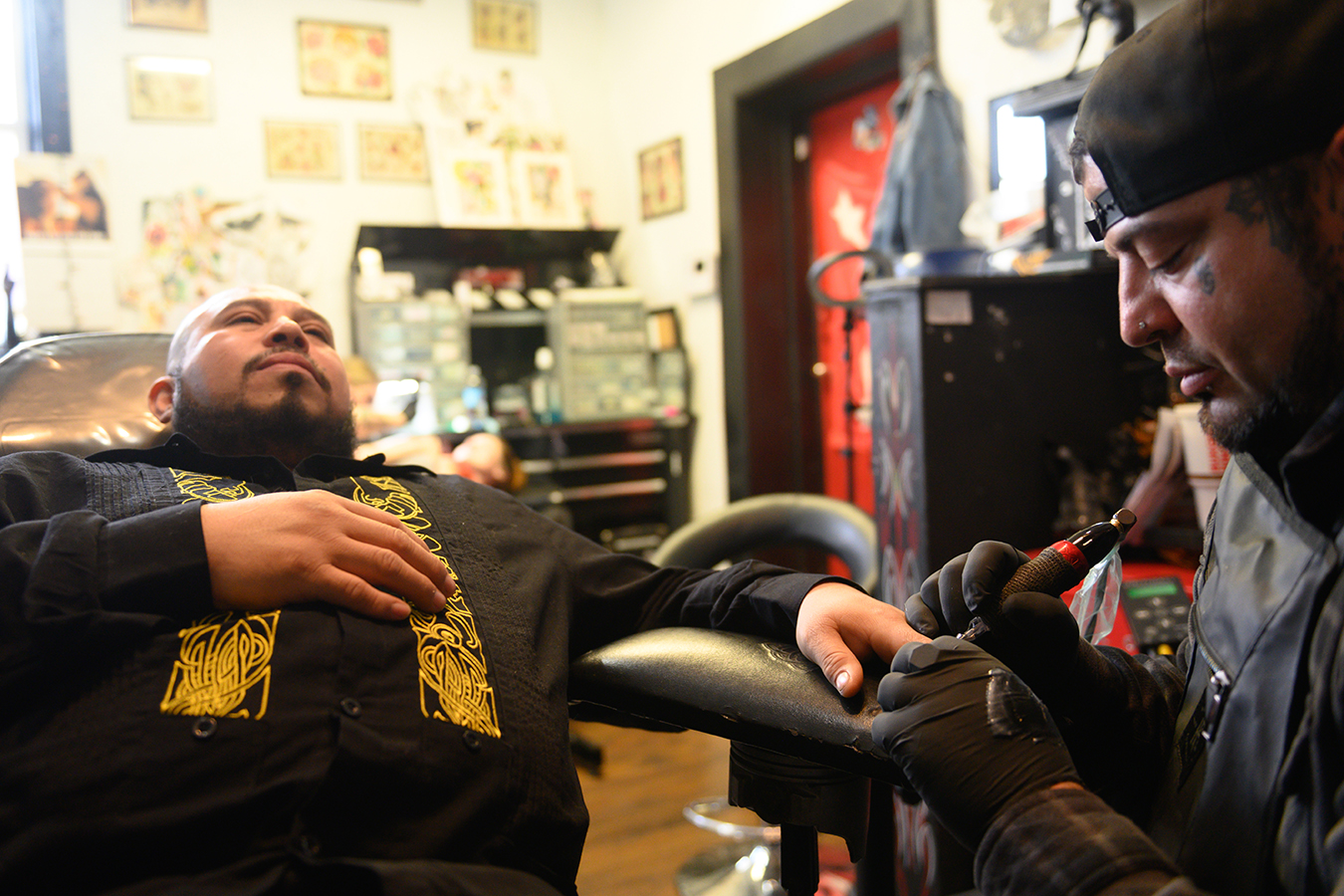 Alvarado had become an amputee 16 years ago when he damaged two fingers on the job at a printing factory. He endured two surgeries after the accident and had decided to visit Catalano’s tattoo studio from his home outside Chicago after seeing the artist’s work online. Although he was upset when the tattoos first wore off, he said, he’d like to try them again because he liked how it looked.

Catalano’s not sure why they work for some and not others.

Getting the same results for people with darker skin tones is also a challenge because the color of their nail beds doesn’t match the color of their skin. And paramedical tattoos of any kind for people of color can be more difficult to execute, which is one reason Sams created a line of 30 skin-colored and undertone pigments for trained professionals that she sells online and at her school. Catalano tracks the ink he uses as he continues to figure things out along the way.

“It may not be a one-size-all thing that fits everybody,” he said.

Catalano still does regular tattoos out of the studio he established more than 10 years ago. His rate of $100 per hour for those tattoos has stayed the same while he donates his paramedical work every Wednesday.

“Every time I see that emotion, I’m 100% sure this is something that I can’t stop doing,” he said. 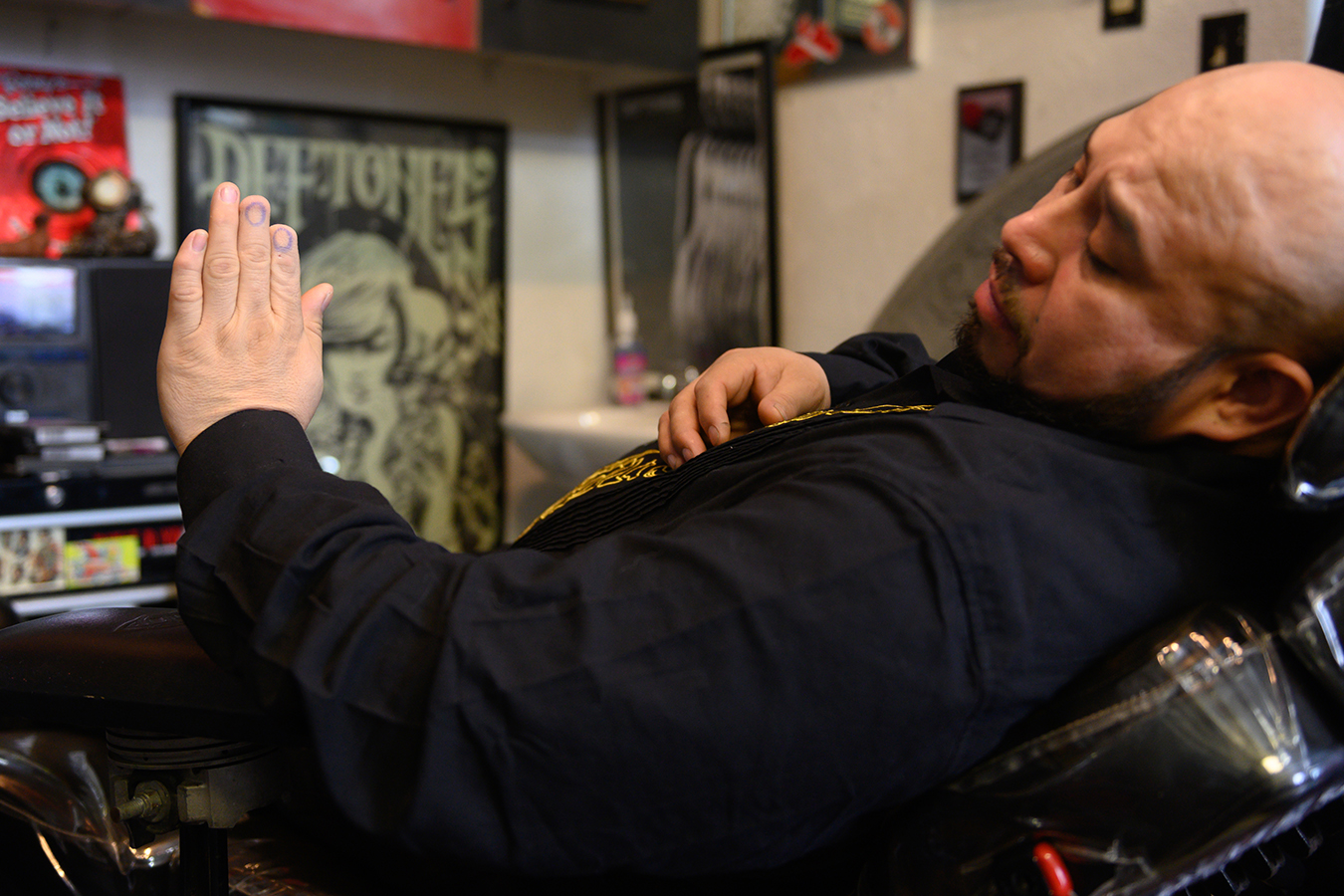