PERRY, Fla. — Getting people to sign up for health insurance under Obamacare is an uphill battle in much of Florida. Politicians have put up roadblocks to the law from the beginning – from joining in the lawsuit to thwart it in 2011 to placing restrictions on what health care navigators can discuss with those they advise.

That means many don’t know what the law might offer them. 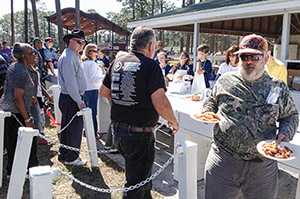 Obamacare is not very popular at the World’s Largest Free Fish Fry in Perry, Fla. (Photo by Eric Whitney).

So in the state that has the second highest rate of uninsured residents in the U.S., advocates are trying get the word out that an estimated 1.6 million Floridians qualify for new subsidies to make coverage more affordable.

Not everyone wants to listen. The message will be hardest to get across, many say, in Florida’s panhandle, where sandy white beaches on the Gulf Coast back up to vast pine forests. Towns are small and scattered. The area is closer both politically and geographically to neighboring Georgia and Alabama than faraway Miami.

At local events like the recent Florida Forestry Festival and “World’s Largest Free Fish Fry” in Perry, it’s not hard to find people like Elijah Mott, an itinerant heavy equipment operator who says he doesn’t know much about the health care law and that most of what he’s heard is bad.

The median household income in this county is about $40,000 a year. Lots of jobs here don’t come with health insurance. That means many here, like Mott, who doesn’t have steady work or insurance at the moment, probably qualify for subsidies to help them afford coverage.

But Mott isn’t buying that the health law could possibly be good for his family.

“I would have to say no,” Mott says, “I haven’t investigated deep enough to know if there is anything.”

Mott, and 41-year-old Michael Dees of Mayo, who works in a paper mill, have mostly heard that Obamacare is going to increase the price of health insurance, making it more unaffordable for people like him.

Dees says he expects to be laid off soon and worries about how he’s going to buy coverage for his family.

“I really hadn’t heard about the subsidy,” he says.

Guys like Dees and Mott are exactly who health law advocates like Karen Woodall are trying to reach. A longtime lobbyist for children’s and family issues in Florida’s capital of Tallahassee, she says it’s tough to convince people here that the law might help them.

“It’s challenging to overcome messages that are coming out of elected officials’ offices and a governor’s office,” she says.

Florida said no to both the law’s Medicaid expansion, and to tens of millions of dollars to advertise new subsidies for those with incomes between 100 and 400 percent of the federal poverty level

Privately-funded groups like Enroll America are trying to supply the outreach and education in Florida. That includes partnering with churches like the Sanctuary at Mt. Calvary in urban Jacksonville, on Florida’s Atlantic coast about three hours east of Perry.

Pastor John Allen Newman invited Enroll America representatives to address his congregation one recent Sunday. From the pulpit, he warns his flock of several hundred against misinformation he says opponents of the law are spreading.

“People perish for what?” he asks from the pulpit.

Newman tells congregants that the law helped him get coverage after a large, private insurer turned him down because of a preexisting condition.

The message hits home with 23-year-old truck driver Anthony Person. “I never knew what it was before until I started coming to this church.” Person says. Pastor Newman, he says, “started explaining it to us the way I could understand it.”

Person left his contact information at the Enroll America table in the church’s lobby, to get help signing up for new Obamacare coverage. “My job is one that does not have the best benefits, so I need health insurance to cover myself,” he says.

And then, there are those who might just fall through the cracks. 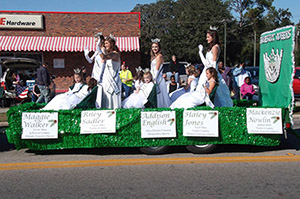 A float at the Florida Forestry Festival in Perry, a small town in northern Florida. People at the festival didn’t know very much about the health law (Photo by Eric Whitney).

Back in the Panhandle, resident Karen Ray wishes subsidies to help working people afford coverage had been available when she was running her small business out of Delray Beach.

“There hasn’t been a realization how many people out there are the working poor,” she says, “working hard and not getting health care. And just living paycheck to paycheck and hoping nothing goes wrong.”

Things went wrong for Ray in a big way after the BP oil spill in 2010. “I had a beach wedding business, and it kind of went downhill after the oil spill,” she says. “I’ve just been trying to get back on my feet since then.”

Even before the oil spill her business never generated enough income to provide health insurance the 60-year-old Ray says. She used to get coverage through her husband’s job.

“I lost my business, and my marriage, and my house, at the same time,” she says, laughing wryly.

That’s left her uninsured. She knows about the law – and she also knows, that because she lives in Florida, she is unlikely to benefit from it.

If Ray lived in one of the 25 states expanding Medicaid, she would qualify for new coverage. But because Florida isn’t expanding, being poor alone isn’t enough to get Medicaid here. Benefits here are reserved primarily for children, pregnant women and the disabled.

And because Ray has no income, she won’t qualify for new Affordable Care Act tax credits designed to help the working poor afford private health coverage.

“I could maybe scrounge up the money to go get a mammogram,” Ray says, but, “what if it comes back positive? What happens to me? It’s not like you can show up in the emergency and say, ‘Ooh! I have an emergency lump!’ That won’t happen.”

This story is part of a partnership that includes NPR and Kaiser Health News, with the support from the Dennis A. Hunt Fund for Health Journalism, a program of the USC Annenberg School of Journalism’s California Endowment Health Journalism Fellowships.

Obamacare Benefits Elusive For Many Working Poor In Northern Florida