Around the country, a handful of nursing home companies have begun selling their own private Medicare insurance policies, pledging close coordination and promising to give clinicians more authority to decide what treatments they will cover for each patient.

These plans are recent additions to the Medicare Advantage market, where private plans have become an increasingly popular alternative to traditional fee-for-service coverage. Unlike other plans, these policies offered by long-term care companies often place a nurse in the skilled nursing facility or retirement village, where they can talk directly to staff and assess patients’ conditions. Some provide primary care doctors and nurses to residents in the homes or in affiliated assisted living facilities or retirement villages with the aim of staving off hospitalizations.

“The traditional model is making decisions based on paper, and in our model, these decisions are being made by clinicians who are really talking to the staff and seeing the patient,” said Angie Tolbert, a vice president of quality at PruittHealth, which began offering its plan to residents in 10 of its nursing homes in Georgia last year. “It’s a big shift in mindset.”

Not everyone finds such plans superior. Some patients who are in disputes with the insurers have faulted the nursing home staff — who work for the same company — for not helping challenge decisions about coverage. They complain that the company holds an unfair advantage over Medicare beneficiaries.

“There’s a conflict there,” said Toby Edelman, a senior attorney with the Center for Medicare Advocacy.

In an Erickson Living retirement village in Silver Spring, Md., Faith Daiak signed up for an Erickson Advantage plan sold by a nurse whose office was in the main village building, according to her son, J.J. Daiak. After a bout with the flu last February weakened her enough to need a 10-day hospitalization, she was sent to her village’s skilled nursing facility. There, the insurer repeatedly tried to cut short her stay.

Erickson Advantage first said it would stop paying for Daiak, 88, because she wasn’t getting healthier in the nursing facility. Her son appealed by pointing out that Medicare explicitly said as part of the 2014 settlement of a class-action lawsuit that patients do not have to be improving to qualify for skilled nursing care.

Daiak’s appeal was denied, but the issue was sidelined in March when her rapid weight loss in the nursing home sent her back to the hospital, he said.

After Daiak returned to the nursing home with a feeding tube in her stomach, the insurer again tried to curtail her time there, saying she did not need that level of care. The family successfully appealed that decision after noting that Medicare’s manual said feeding-tube maintenance required the skilled care of a nursing facility.

In April, Erickson Advantage again said it would not continue paying for Daiak’s stay. It reversed that decision after Kaiser Health News asked the company about the case, J.J. Daiak said. He said the plan did not explain its turnaround. 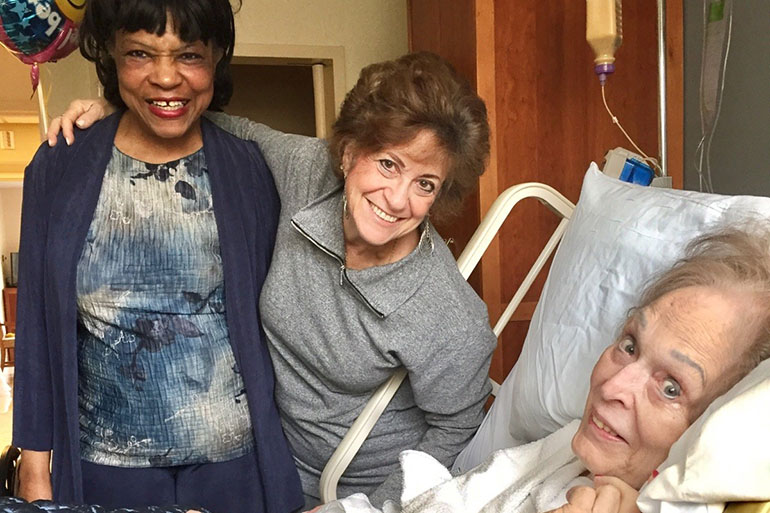 Dolphine Williams (left) and Rita Coopersmith visit Faith Daiak in the Riderwood-ArborRidge Skilled Nursing Facility in Silver Spring, Md., on May 12, 2017. (Courtesy of the Daiak family)

While this Medicare Advantage plan touts its “team that knows you personally and wants to help,” J.J. Daiak said he found the registered nurse at Erickson’s Silver Spring community not helpful. “All I see is her trying to get Erickson out of having to pay for the nursing home,” he said. He subsequently switched his mother to traditional Medicare coverage with a supplemental Medigap policy, which she had until this year.

Erickson Living, the parent company of the nursing home and insurer, declined to discuss individual cases but noted that Medicare has given its insurance plans the best quality rating of five stars. In a written statement, the company said that “medical service determinations for Erickson Advantage members are based on reviews by licensed clinical staff and clinical guideline criteria. Our primary focus is always on ensuring that the healthcare being provided for our residents matches a patient’s needs and established clinical treatment protocols.”

Edelman said the dispute was particularly troubling because Erickson’s retirement villages are marketed on the promise that the company will care for seniors in all stages of aging. “They don’t tell you what they won’t pay for,” she said.

There are nearly 18 million enrollees in the overall Medicare Advantage market. Medicare pays private insurers a set amount to care for each beneficiary. In theory, this payment method gives the insurers motivation to keep patients from needing costly medical services such as hospitalizations.

A subset of Medicare Advantage plans are designed exclusively for people who either require or are expected to require at least 90 days of skilled services from nursing homes, assisted living facilities or other long-term care institutions. UnitedHealthcare directly offers three-quarters of these plans with about 40,000 enrollees, far more than those offered by nursing home companies. Matthew Burns, a UnitedHealth spokesman, said the majority of the company’s plans are rated four stars or better on Medicare’s five-star quality scale.

“Our plans offer members quality and peace of mind — and they are considered above average to excellent by CMS quality and performance standards,” he said in a statement.

United also underwrites Erickson’s policies, which have around 200 enrollees, and were the first Advantage plans offered by a long-term care operator. Under the arrangement, Erickson Advantage decides when a nursing home stay is covered.

Nick Williams, PruittHealth’s care integration officer, said its Medicare insurance plan has resulted in 30 percent fewer hospitalizations among residents since it began last year. The company intends to expand the insurance coverage to residents at 42 of its other nursing homes in Georgia. Other nursing home chains are experimenting with this model in Missouri, South Carolina, Virginia and elsewhere.

Anne Tumlinson, a Washington health care industry consultant who specializes in long-term care, said that when a nursing home’s company is on the hook for the cost of hospitalizations of their patients, it is more likely to make efforts to prevent them.

“It gets them out of hospitalizing people at the drop of the hat,” she said. “If you live in a nursing home or are living in assisted living and they have one of these plans going, they’re going to be investing heavily in 24/7 access to primary care.”

She said big insurers have so many different types of enrollees that they are less focused on the particular needs of nursing home patients. “They’re too big, they’re bureaucratic, and they are insurers, not providers,” she said.

In Hingham, Mass., Suzanne Carmick has been frustrated with the Erickson plan’s unwillingness to pay for most of her mother’s prolonged stay. Last October, 98-year-old Lorraine Carmick went into Erickson’s nursing home after a hospitalization. Eleven days later, Erickson Advantage notified Suzanne Carmick it would stop paying for the facility because it said her mother was strong enough to move with the help of a rolling walker. Under Medicare’s rules, nursing home stays are not covered if a patient does not need daily physical therapy. Erickson said two or three days was sufficient for Carmick.

Suzanne Carmick appealed the decision, saying Erickson exaggerated her mother’s recovery, noting that she had dementia, an infection and was wearing two stiff leg braces. She said getting therapy five days a week provided in the nursing home would help her mother recover faster.

“She still cannot stand up or sit down or go anywhere … without an aide helping her by pulling her up or setting her in a chair,” Carmick wrote. “She is improving but is now supposed to stop or decrease PT [physical therapy], and she must start paying out-of-pocket?”

After a week’s extension, the nursing home began billing her mother at its daily rate of $463, which rose to $483 this year as Lorraine Carmick remained in the nursing home. A Medicare appeals judge subsequently ruled Erickson’s action was justified, based on the testimony from the nursing home staff — all Erickson employees. If the insurer had covered a maximum stay, Carmick would have avoided more than $30,000 in bills she now owes. Suzanne Carmick said her mother has been on a wait list for six months for a bed on a less expensive floor in the nursing facility.

“It is a closed system where the skilled nursing facility, physicians and Medicare Advantage plan are all one and the same,” she said. “The Erickson Advantage plan is turning out to be quite a disadvantage at this point.”