Dr. Alison Webb took her 81-year-old father out of assisted living, to live.

Coleen Hubbard took her 85-year-old mother out of independent living, to die.

With the coronavirus moving through facilities that house older adults, families across the country are wondering “Should I bring Mom or Dad home?”

It’s a reasonable question. Most retirement complexes and long-term care facilities are excluding visitors. Older adults are asked to stay in their rooms and are alone for most of the day. Family members might call, but that doesn’t fill the time. Their friends in the facility are also sequestered.

In a matter of weeks, conditions have deteriorated in many of these centers.

At assisted living sites, staff shortages are developing as aides become sick or stay home with children whose schools have closed.

Nursing homes, where seniors go for rehabilitation after a hospital stay or live long term if they’re seriously ill and frail, are being hard hit by the coronavirus. They’re potential petri dishes for infection.

Still, older adults in these settings are being fed and offered other types of assistance. My neighbor’s 80-something parents are at a continuing care community outside Denver. It has started a concierge service for residents who need to order groceries and fill prescriptions. At rehab centers, physical, occupational and speech therapists offer valuable services.

But would be Mom or Dad fare better, even with all due social distancing, in the family home?

Of course, care there would fall squarely on the family’s shoulders, as would the responsibility for buying groceries, cooking, administering medication, doing the laundry and ensuring the environment is free from potential contamination.

Home health care services could lend a hand. But they may not be easy to get because of growing demand, shortages of personal protective equipment and staffing issues.

Another concern in bringing someone home: Some facilities are telling residents that if they leave, even temporarily, they can’t return. That happened to a family in western New York, according to Roxanne Sorensen, a geriatric care manager with Elder Care Solutions of WNY.

When this family took their elderly parents out of an assisted living facility for a brief “stay-with-us” respite, they were told the parents had been discharged and had to be placed on a waiting list before they could return.

Sorensen has a client in her early 70s who’s in rehabilitation at a nursing home after emergency surgery for a life-threatening infection. The facility is on lockdown and her client is feeling trapped and desperate. She wants to go home, but she’s still weak and needs a lot more therapy.

“I’ve told her, stay here, get stronger and when you go home you won’t end up in the hospital or with disabilities that could put you back in a nursing home for the rest of your life,” Sorensen said.

Those in nursing care who have cognitive impairments may become disoriented or agitated if a family moves them from an environment that feels familiar, said Dr. Thomas Cornwell, executive chairman of the Home Centered Care Institute. Some have behavioral issues that can’t be managed at home.

Families with children need to think carefully about bringing an older parent home, especially if he or she has underlying chronic illnesses such as heart, lung or kidney disease, Cornwell said. “Kids, generally, even in the past few weeks, have been exposed to hundreds of others [at school],” he said. “They tend to be vectors of infection.”

Ultimately, every family must weigh and balance the risks. Can they give an older parent enough attention? Do they have the emotional and physical stamina to take this on? What does the parent want? Will the pangs of displacement and disrupted routines be offset by the pleasures of being around adult children and grandchildren?

Dr. Alison Webb, a retired physician, is a single mom raising a 3-year-old and a 7-year-old. Her father, Bob Webb, 81, has mild dementia and had been hospitalized for depression before she asked him to leave assisted living and move into her Seattle home.

“Initially he resisted. He feared change, and he was concerned that his stuff was going to be left behind and he wouldn’t get it back, ever,” Webb said. Even today, Bob talks about going back home to his apartment.

Webb said a geriatrician on a Facebook group for female physicians convinced her it was safer for her father to leave his assisted living center. “’You’ll do a lot better here with the grandkids. You can play games. There’s a big yard. You can do some gardening,’” Webb said she told her dad.

There’s another benefit. Because she’s a physician, Webb said, she hopes “I’ll notice if he’s not doing well and take care of it right away.”

Coleen Hubbard’s mother, Delores, whom she described as “really resilient and really stubborn,” had loved living in a one-bedroom apartment in a Denver senior housing complex for the past decade. In October, Delores was diagnosed with endometrial cancer and decided not to have medical treatment. 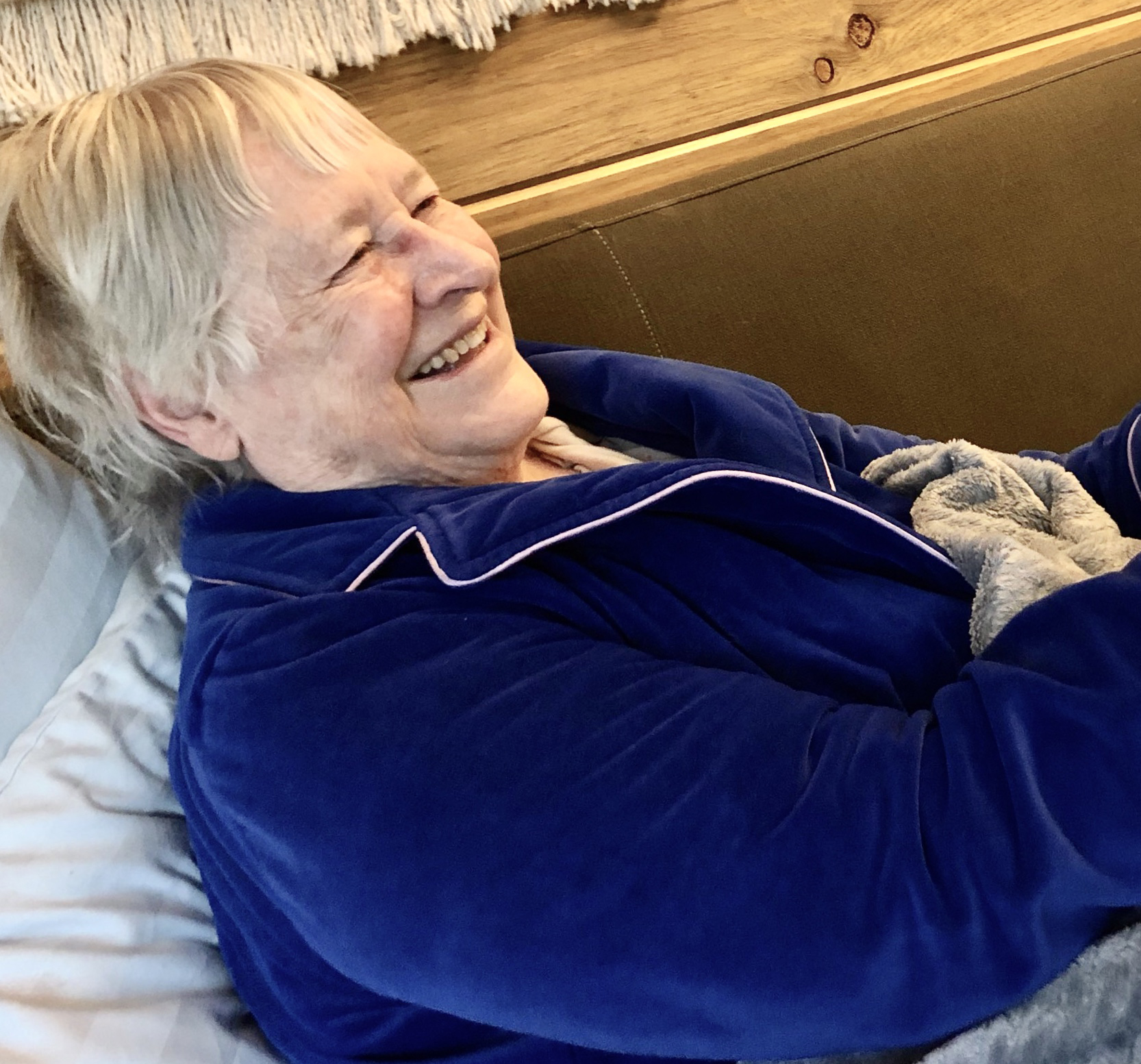 “Mom had a lot of surgeries and hospitalizations in her life,” Hubbard said. “She was done dealing with the medical community.”

Every time Hubbard suggested her mother move in with her, Delores refused: She wanted to die in her own apartment. But then, a few weeks ago, serious pain set in and Delores asked the Denver Hospice to begin giving her morphine.

“That’s when I realized that we may be close to the end,” Hubbard said. “And I felt an incredible urgent panic that I had to get her out of there. Things were already starting to close [because of the coronavirus]. I could not fathom that she might be cut off from me.”

Hubbard prepared a room at home and found a small, tinny metal bell that Delores could ring if she needed help. “We made a lot of jokes about Peter Pan and Tinker Bell,” Hubbard remembered. “When she rang the bell, I’d come in and say, ‘Yes, m’lady, what’s happening?’”

Five days after arriving, Delores passed away. “Grieving right now happens in a space of solitude and silence,” Hubbard wrote in a Facebook post. “Sure, there are texts and phone calls, emails and snail mail, but no embraces, no questionable casseroles delivered by neighbors, no gathering of family and friends to share stories and memories.”

Amid the grief is relief that Delores had what she wanted: a death without medical interventions. “I’m pinching myself that we made that happen,” Hubbard said. “And I’m so glad we brought her home.” 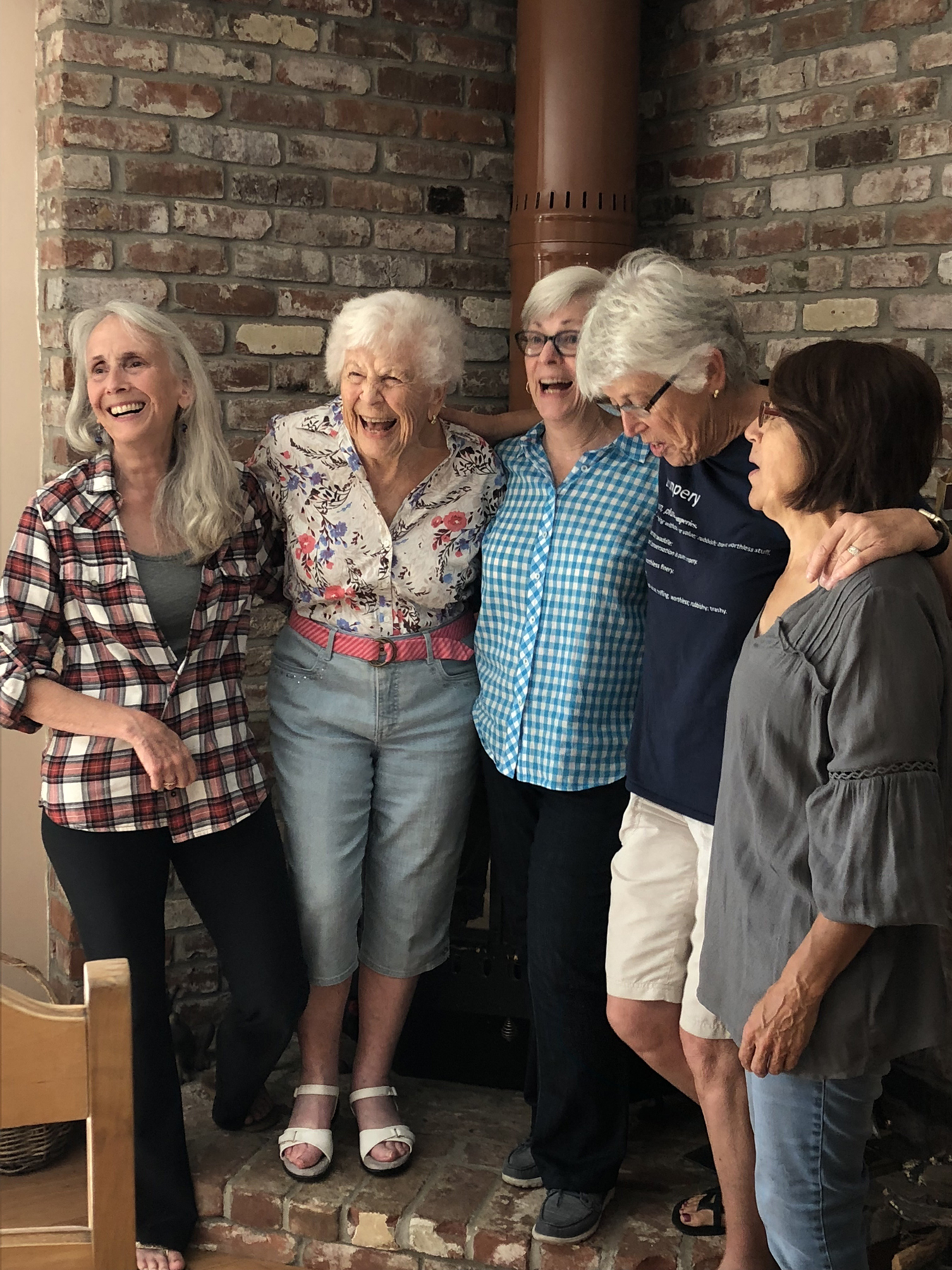 Patricia Scott, her daughters and two daughters-in-law.(Courtesy of Gordon Scott)

Patricia Scott’s story is unfinished. The 101-year-old was living in a retirement community in Castro Valley, California, before her son, Bart Scott, brought her to his house in Santa Rosa, moving her into a spacious in-law apartment.

Asked how she felt about the change, Patricia Scott said, “I’ve never been particularly thrilled with the idea of homogenized residency with a bunch of old farts, of whom I am one.”

Yet, she longs for her two-bedroom apartment: “It’s just that everything is there. I know where crap is. I miss my regular life.”

Bart Scott has four siblings, and they agreed that it was untenable to leave his mother alone during the coronavirus scare. “She is the matriarch of this family,” he said. “There are a lot of people who put a lot of store in her well-being.”

As for potential health threats, Patricia Scott is characteristically sardonic. “I was born in 1918, in the middle of the influenza epidemic,” she said, “and I think there’s a delicious irony that I could very well exit in this one.”

Should You Bring Mom Home From Assisted Living During The Pandemic?